Why is the VOR reference and variable signal modulated at 30 Hz?

VOR signals radiated from the ground beacon are modulated at 30 Hertz.

What is the reason behind this?

vor radio-navigation frequency
Share
Improve this question
edited May 20 '21 at 15:15

A VOR relies on two 30Hz signals: Reference signal and variable signal (more on the VOR principle here). The US grid is 60Hz, a synchronous motor with two pairs of poles turns at 1800 rpm, that is 30 rounds per seconds.

The reference modulated the frequency of a 9,960Hz subcarrier (332x30Hz) with a modulation index of 16, meaning the subcarrier swinged between 9,480Hz and 10,440Hz. Here is the description of the mechanical assembly used:

A tone wheel is driven by an 1800 rpm (30 rps) motor; and on this wheel are 332 teeth which are arranged in a slightly staggered manner so as to impart a cyclical variation between 9480 Hz and 10,440 Hz with the rotation of the motor. The frequency modulated signal from this tone wheel is then used to amplitude modulate the VOR carrier signal.

Here's what the rotating/modulating assembly looked like for a Collins VOR station:

A single motor used to generate both the reference and the variable signal ensured the two signals remained coherent, and therefore allowed a simple phase angles subtraction to get the bearing.

If the VOR had been designed in Europe, the same motor would have turned at 25 rps, and the signals frequency would have been 25Hz instead of 30Hz. There comes @Sanchises question below, about the consequences of the different grids on the VOR compatibility around the world... While the motor angular velocity is the first to be impacted by a different power supply frequency, harmonic interference must also be considered, for example:

Modern solutions to solve both the angular velocity problem and the harmonic interferences problem are straightforward, but they were not 60 years ago. It seems designers at this time chose to recreate a 60Hz source locally and dismissed 50Hz AC for the related portion of the equipment. I got this schematics from a 1968 issue of the French aeronautical navigation engineering group bulletin: 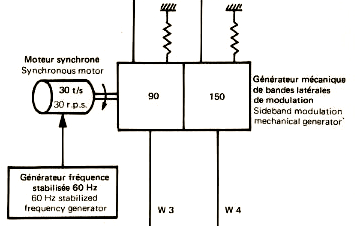 A 1,800 rpm synchronous motor is used to generate mechanically the two frequencies. But France has opted for a 50Hz grid. A static inverter is used as a local 60Hz power supply. As mentioned in the source document, the inverter frequency is stabilized with a 1% accuracy.

Not the answer you're looking for? Browse other questions tagged vor radio-navigation frequency or ask your own question.

21
What is the difference between conventional VOR and Doppler VOR?

10
How does the VOR receiver pick up the signal and how are the needles controlled?
6
Why would a VOR be decommissioned leaving the DME?
21
What is the difference between conventional VOR and Doppler VOR?
13
What causes the phase to change in a VOR?
5
What is the VOR reference signal?
1
Calculating distance from VOR station with radial and heading
1
How do I do these VOR time and distance calculations?
0
Do we need to know the true track to a VOR?
13
Why am I not getting the "TO" VOR flag as I think I should?