I've always wondered what the purpose of these "bars" on the nose of the F-16 (and some other military aircraft) are. Are they sensors (if so, what kind)? Are they lightning strips? I can't seem to figure out how to word my search query to find an answer, so I figured I'd ask here! 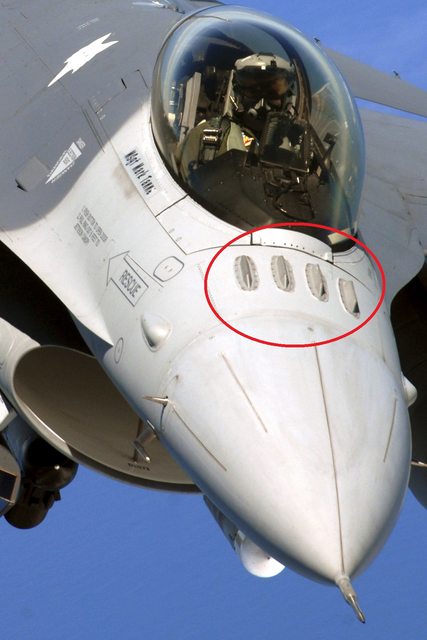 These are antennae for the IFF (Identification Friend or Foe) system. IFF is a system to help distinguish friendly aircraft from unfriendly ones.

This particular antenna arrangement is used on only a couple of F-16 models. The first was the F-16 Air Defense Fighter (ADF) version. This model was converted from the F-16 Block 15 for use as a fighter interceptor for the US Air National Guard. A total of 271 F-16A and F-16B aircraft were upgraded to this standard between 1989 and 1992. One of the modifications made during the conversion process was installation of the Teledyne/E Systems Mk.XII Advanced IFF system, given the designation APX-109. This system included four antennas, often nicknamed "bird slicers," placed in front of the cockpit canopy with additional antennas on the bottom of the inlet.

Also, to add to Wayne's answer, there are multiple antennas because the computer that processes the data received compares the phase of the signals received from each of them to calculate the direction the signal came from... Because they are separated from one another, any signal received from a point directly in front of them will be received at the same time (it travels the same distance), and will therefore be in phase with the signals from the others.
But if the source is off to one side, then the signal received from the near antenna will have traveled a shorter distance, and will be out of phase with the others by an amount proportional to the sine of the angle to the source.

Not the answer you're looking for? Browse other questions tagged feature-identification f-16 sensors nose or ask your own question.