Can I simply use multiple turbojet engines to fly supersonic?

Imagine: to fly supersonic, I need for my aircraft 9 kN of continious thrust.

I am wondering now: is it possible to use just two FJ33 jet engines, so that I would just double the maximum thrust ?

What are the restrictions to this?

My thoughts: If I fly supersonic with a jet engine which is designed actually for subsonic flight, there can be many aerodynamic effects like stall and strong rise in drag at the gondola, for which the engine is not designed: So I would need a diffusor to bring the supersonic flow down to an optimal flow velocity for the FJ33.

Is this correct? Do you know some other restrictions?

is it possible to use just two FJ33 jet engines, so that I would just double the maximum thrust ?

Yes, you will double the maximum thrust on the ground and at rest. You will also double thrust at altitude and flight speed, but that thrust will be much lower than your sea level static thrust. Below is a thrust diagram over speed and for several altitudes for a small turbofan engine with a bypass ratio of 3. It is not the Williams, for which I don't have this kind of diagram, but very similar. 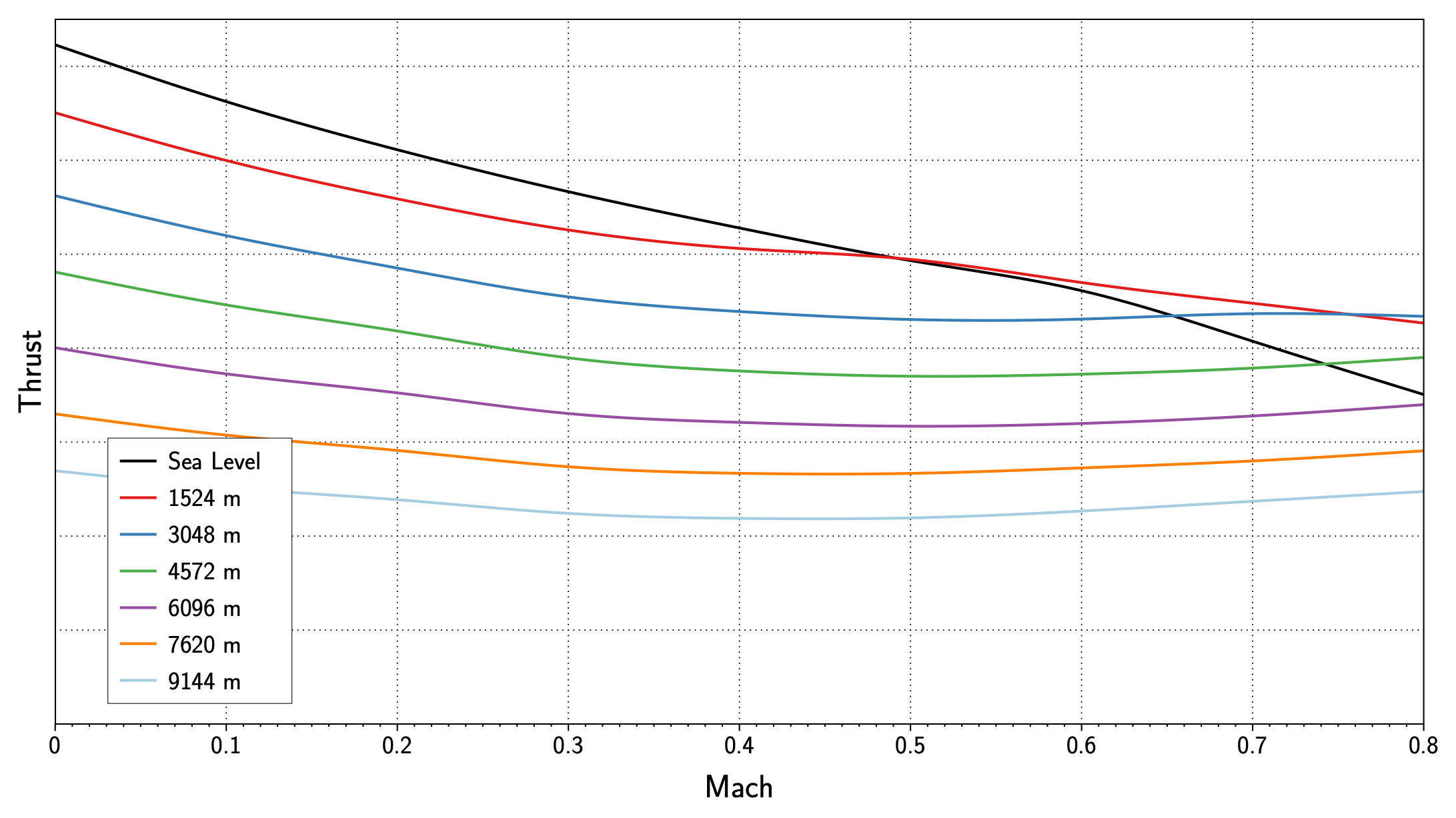 The kink in the low level thrust line is from internal engine pressure limits. At low altitude and high speed the pressure inside the compressor and burners must be limited so they will not be overstressed.

Below 10,000 ft it is not legal to fly faster than 250 kts and supersonic flight is illegal over a lot of areas. In order to achieve legal supersonic flight you need to be high and over unpopulated land. The higher the better, but as you can see from the diagram, thrust drops with altitude. For turbofans it also drops with airspeed. Now it would be interesting to know at what altitude and speed those 9 kN of thrust are required - maybe that number is for a lower altitude and the two FJ33 are indeed sufficient. At the moment that question is unanswerable with the information given.

So I would need a diffusor to bring the supersonic flow down to an optimal flow velocity for the FJ33.

Yes, but that is simpler than it seems. Every engine intake will slow down and pre-compress the incoming air stream at high subsonic flight speed simply because the engine will not be able to swallow all the air that could flow through the intake at high speed. Instead, some air will spill over the intake lips so only the core of the streamtube that flows toward the intake will be ingested. At supersonic speed the intake will do this precompression by means of a shock, the strength of which is again influenced by the swallowing capacity of the engine. Still, the intake cross section needs to widen between the intake face and the engine face and must be carefully shaped to avoid flow separation or speed variations at the engine face (that is actually the tricky part) or you will not be able to achieve the full performance of the engine. A simple pitot intake should be sufficient but it will need some length to do its work properly. Therefore, it is advisable to not put the engine in gondolas (B-58 style, also called nacelles) but to integrate them into the fuselage.

Thrust is the difference between intake an exit impulse, so you need high exit speed in order to have useable thrust at supersonic speed. While a simple convergent nozzle can be used to achieve supersonic flight, the best results are obtained with a convergent-divergent nozzle. Due to the high temperature of the exit flow, even a subsonic exhaust stream will bring you to supersonic speed, but only just. Given the relatively high bypass ratio of the FJ33, if supersonic flight is achieved, the maximum Mach number in level flight will not be much above 1 (if the drag characteristics of the airframe allow even this).

There are actually two questions in this post, which I'll address separately.

The first question is "Does the thrust from multiple engines add together?" And the answer to that is yes, so long as both engines are mounted so that their thrust vectors are parallel, two engines, each producing 6 kN of thrust, will produce a total of 12 kN.

The second question is "Can I just bolt a second engine onto my airplane to make it go supersonic?" There's not enough information here to accurately answer that question, so the closest I can get is "probably not".

The maximum thrust of the engine doesn't matter. What matters is the actual amount of thrust produced by the engine in the conditions you expect. You mention the maximum thrust is achieved at sea level. But you're not likely to be flying at sea level, are you? You're going to be flying much higher, where the air is thinner and therefore wind resistance is much less, but you're not going to get the full 6 kN at those altitudes. An engine designed for subsonic speeds also isn't going to produce its maximum rated thrust at transonic or higher speeds, so you're also going to lose thrust as your speed increases.

There are other factors too. There are all sorts of interesting shock waves that form in the transonic region, which could either starve your engines of air, force too much air into them, or even damage the turbines. Adding baffles as you mention is going to add a lot of drag, which will need more thrust to counter. Another consideration is that the simple weight of the engine will require more thrust to lift. So even if your "9 kN" calculation is accurate for the plane as-is, it's not going to be accurate after you've made all these modifications to it.

Another thing to consider is the strength of the airframe. If you put a second engine on a frame not designed for it, you're going to damage and probably destroy it.

In general, the answer is no. The two classes have different characteristic exhaust velocities. However, some subsonic engines can be persuaded to attain modest supersonic speeds.

A subsonic turbofan, such as the Williams FJ33, is designed for maximum efficiency at subsonic speeds. It therefore has a high bypass ratio, meaning that the fan greatly increases the mass flow of the engine, while limiting the overall exhaust velocity. This maximises the thermodynamic efficiency of the engine, and hence also its fuel efficiency. The exhaust nozzle is shaped to allow air out without building up a back pressure which would reduce mass flow. Typically it is of convergent profile, which accelerates the exhaust backwards and thus converts some of the exhaust temperature and pressure into thrust.

A supersonic engine has to accelerate the exhaust much harder. To obtain a given thrust, it therefore needs less mass flow and so its bypass ratio is much lower (a pure jet has zero bypass ratio). But supersonic airflow within an engine, especially its "hot" end, is undesirable. So, to maintain high exhaust speed the temperature of the exhaust is raised, also raising the speed of sound in it. The exhaust thus "thinks" it is still subsonic. The exhaust nozzle is shaped to maintain the back pressure needed to maintain that temperature, but still somehow provide additional thrust. It is typically of convergent-divergent profile; the convergent section helps to retain the back pressure, while the high-pressure exhaust passing from there into the divergent section then expands rapidly sideways, its pressure thrusting against the angled sidewall to create significant thrust.

So you can see that merely adding a supersonic intake duct is nowhere near enough; subsonic turbofans such as the FJ33 are just not cut out for the supersonic role, their low exhaust velocity prevents anything more than the most modest supersonic speeds. You might in theory add an afterburner (reheat) and reshape the exhaust nozzle, but that would massively increase fuel consumption. The performance and reliability of the engine core would also suffer, as it would not be optimised for such a pressure and temperature regimen.

Another important thing to bear in mind is that aerodynamics work quite differently at supersonic speeds. While you can make anything go fast if you push hard enough, an aircraft that’s not designed for supersonic operation would likely be uncontrollable under those conditions.

60
Why can't jet engines operate with supersonic air and how do they slow it down?
14
Why can't sonic booms be heard at air shows?
20
How is supercruise achieved?
11
Can a convergent nozzle be used for a supersonic jet engine?
16
Why are speed restrictions imposed for flights flying below 10,000 ft?
16
At what altitude did Concorde go supersonic?
7
Which supersonic airplanes use Pitot Air intakes?
6
Does the air resistance of a jet engine air intake count towards the jet's total air resistance?
5
Why is thrust said to be constant over speed for a jet engine?
0
Is it possible to create a direct supersonic airflow to a turbofan's afterburner in order to enhance the performance or reduce the fuel consumption?
See more linked questions

24
In what way are the Concorde's engines considered efficient?
6
How does turbofan engine performance depend on speed and density altutude?
9
Is it currently possible to build a jet engine with 1,050 kN of thrust? (236,049 lbf)
17
Why is max endurance different for jet and props?
4
Does the P&W F100 turbofan engine of the F-16 really produce this much power?
3
What would be the minimum number of engines required to climb in a 747?
2
Why can such a small difference in thrust make such a big difference in maximum speed?
1
How do power and thrust curves compare?