Did any metal airplane use a Maxwell slot?

The Douglas DC-8 used leading-edge slots. Unlike slots in light planes, this one was door operated.

I thought Douglas must have patented it. But as far as I searched, they did not. So it must have been an older design. More researching later, I arrived at a patent, inconveniently titled "Airplane wing", by Frank R Maxwell (image below). Which is the same as the DC-8 minus the pop-out upper part. Earlier designs by Maxwell for this design date back to at least 1928.

And indeed a 1937 NACA report, Wind-tunnel tests of a Clark Y wing with 'Maxwell' leading-edge slots, uses the term Maxwell slot to describe them.

For a given slat size the Maxwell wing with the narrow slat has approximately the same aerodynamic characteristics as the Handley Page type of slotted wing.

Did any metal airplane use a true Maxwell slot? One example would suffice. I haven't been able to find any. I think the 'pop-up part' is important; the DC-8-style slot did not work on the DC-9 without vortilons (during development). 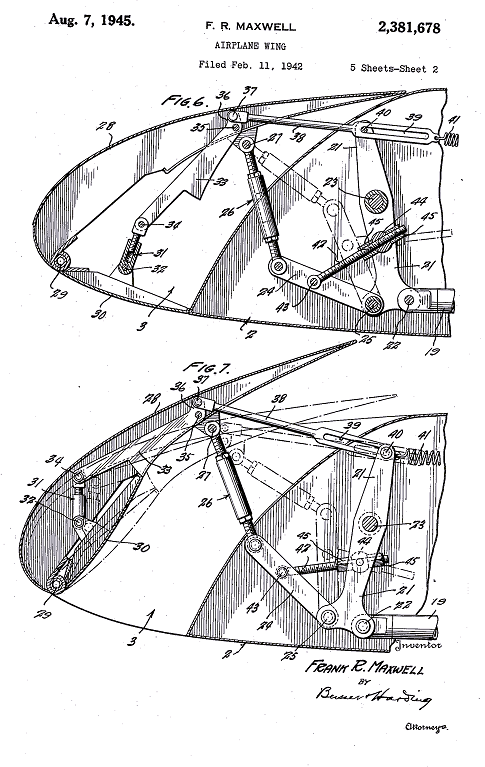 ... had default Maxwell slots, thanks to a wartime NACA report.[1] The report makes no mention of the plane's model, but another report does in the references section.[2]

I thought, it can't be true, it must have been a NACA modification. But no, the first reference explicitly lists the modifications done. The first of which is what I needed:

Modification 1.– Auxiliary slats were mounted ahead and above the normal leading edge of the wing root, overlapping the inboard end of the original Maxwell slot arrangement by about an inch (fig. 11). [happy-emphasis mine]

Photos are hard to come by, but I found one that shows the popped-up leading-edge from behind:

Source: ww2db.com; the plane was available in land/sea configurations.

1: Adams, Betty. "Flight Measurements of the Effects of a Wing Leading-edge Slot and Other Modifications on the Stability, Maximum Lift, and High Speed of an Observation Airplane." (1943). https://ntrs.nasa.gov/citations/19930093568

2: Adams, Betty. "Flight measurements of the effect of various amounts of aileron droop on the low-speed lateral-control characteristics of an observation airplane." (1943). https://ntrs.nasa.gov/citations/19930092611

Not the answer you're looking for? Browse other questions tagged aviation-history high-lift-device or ask your own question.

10
How did Charles Lindbergh use dead reckoning over the Atlantic ocean?
7
How does the use of Leading Edge Root Extension help in increasing stall angle?
9
Why did the early versions of the Me-109 use a braced stabilizer?
2
First airplane to use a flight simulator?
7
How did aircraft flying in formation use flares to communicate with each other?
3
Did older Airliners use a pitot-static system?
12
What year did the seat belt sign come in to use?
8
Did Japan actually use any production aircraft with inverted gull wings during WW2?
3
Do any regional turboprop aircraft have leading edge high lift devices?
6
What pattern of position lights did early Soviet jetliners use?