There is this report that says the risk of aerosol spreading on a commercial liner is low due to HEPA filters.

But it is not considering the cases when A/C is OFF. This seems to be quite common when the plane is on the tarmac but away from the gates. At the gate the air is supplied by the airport. There are numerous reports of planes being delayed for hours in hot weather and passengers suffering. I have been in that situation myself a few times.

This is explained on quora:

It's kind of a double-edged sword. Simply put, cabin air in flight comes from intakes just behind the engine compressors. In flight, you're getting fresh, clean air that is inducted, mixed and filtered. It circulates through the cabin and eventually, lots of the circulated air gets sucked out by air blowing past the plane at nearly the speed of sound. However, its a different story when you're sitting on the tarmac. Engines at idle are still producing fumes, and these can get inducted along with fresh air because there's no air thrusting the fumes away from the plane as there is when you're moving at 500 knots. That mix can be filtered to a degree and is safe to breathe, but it's still going to smell awful, and even burn your throat. If you fly often, you'll often notice an awful smell of fuel when you get on the plane that clears up after takeoff. Granted, some of that smell at idle also comes from open passenger doors, but you get the idea. Also, due to changes resulting from in-flight fires, and 9/11, the pilots are isolated, and can often be unaware of how uncomfortable it is getting in the passenger cabin. Someone has got to bring it to their attention. Its not like a thermostat in your house, where you just set it and forget it. The crew has to control the cabin air on a more or less manual basis. Ever been to a restaurant that's freezing cold? Lots of times, the thermostat is controlled by people working in the hot kitchen, and the kitchen crew may not be aware (or even care) that their comfort is turning your fingers into icicles. Same principle.

So if the AC is OFF on the tarmac due to fumes, would it not make sense to use 100% recirculation in this instance and switch to fresh air whilst airborne? Can the pilot control this from the cockpit?

The air that enters the cabin of an airliner usually comes from a mixing manifold, like e.g. shown here for the Boeing 737: 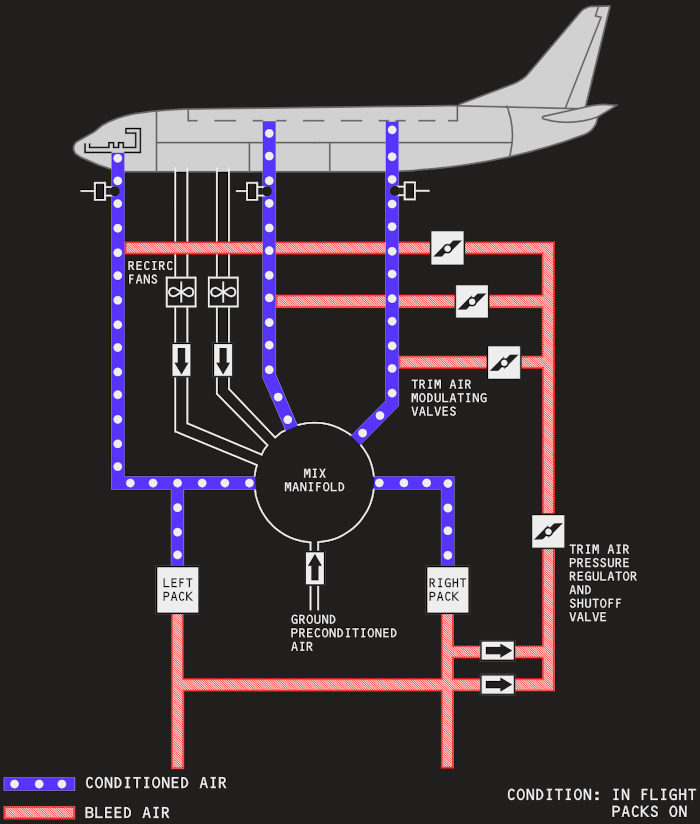 There are three ways to supply air to the mixing manifold:

Your question seems to focus on the time where the aircraft has already left the gate (so ground PCA is out of the question), but is still on the ground. At this time, the engines are usually running, so they could supply fresh bleed air to the PACKs. For longer waiting times, the engines are usually switched off to save fuel, but the APU would be running to power the aircraft. The APU could then also provide fresh bleed air to the PACKs.

As the quote from quora you included shows, this bleed air is not always of the best quality on the ground. It can therefore be switched off by the pilots. The following picture shows the bleed air panel of a 737-800: 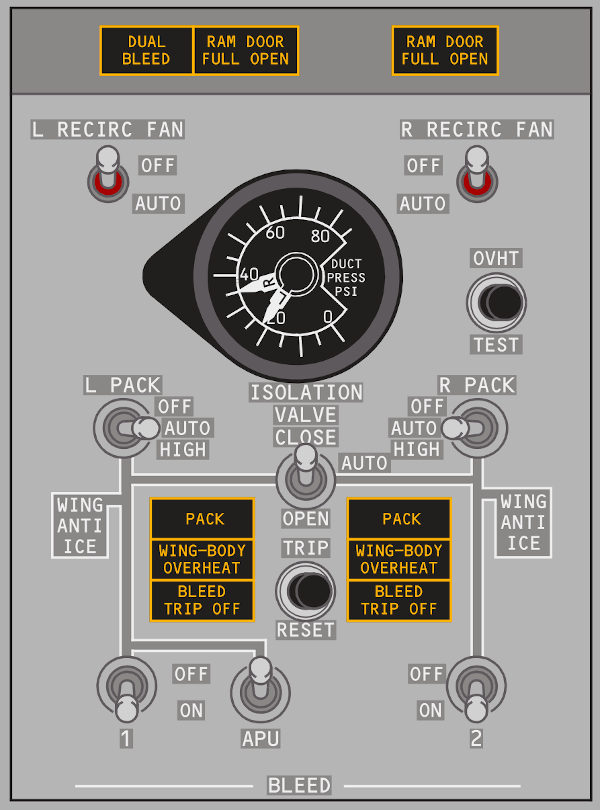 At the bottom are the bleed air switches for the engines and the APU. When they are switched off, the only source of air into the mixing manifold is the recirculated air. So in this case, you are already running on 100% recirculation, which is then HEPA filtered. Since the air does not go through the PACKs, it is not conditioned though, so it will get hot and stuffy in the cabin.

The top row of switches on the panel are for the two recirculation fans. They can also be switched off, in which case no air would enter the mixing manifold any more. This would make the cabin even more uncomfortable on the ground and of course also remove any HEPA filtering.

You are right, external preconditioned air provided at the gates by airports do not pass throw HEPA filters.

Many countries' Civil Aviation Authorities (CAAs) have forbidden or restricted its use based on ICAO recommendations.

Operations without the air conditioning packs or external pre-conditioned air (PCA) source should be avoided. External air sources are not processed through a high-efficiency particulate air (HEPA) filter. Use of the aircraft APU should be permitted at the gate to enable the aircraft’s air conditioning system to be operated, if equivalent filtration from PCA is not available.

17
Do airliner cabin filters trap viruses or other pathogens?
15
What is this tube connected to a 757 for?

5
How common and dangerous are fume events?
3
Why and how can a fume event occur?
5
What does the phrase "electrically controlled and pneumatically operated" mean?
1
Do small business jets have HEPA filters?
2
What is the difference between a reverse and non-reverse bootstrap ACM?