I was under the impression a software update would turn SA-On to SA-Aware. But that's not the case. Why is that? I'm asking about transport aircraft. I wasn't able to find an answer, and to add a complication, ICAO says:

If it's "no longer relevant", then why is there a difference in the preflight check rule (shown below)? 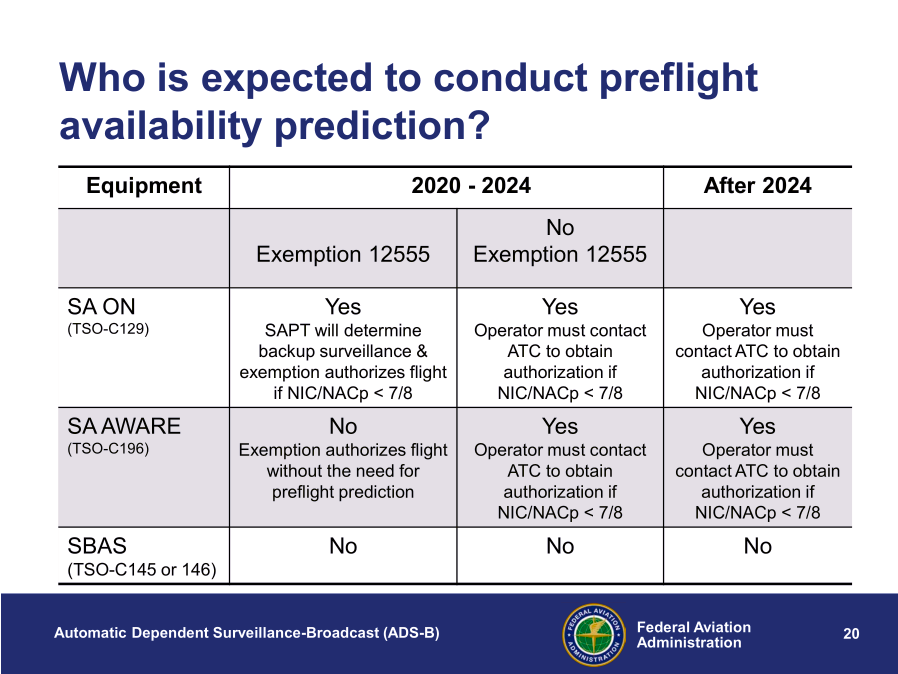 As the linked ICAO article on GPS accuracy states, the issue is not just the navigation accuracy but the reported accuracy which is critical when used for ADS-B.

3.2.1 For GPS receivers which are not SA aware, the accuracy and integrity REPORTED and then used in ADS-B messages is based on an ASSUMED value of UERE, corresponding to the period when SA was active. This value is grossly larger than the accuracy of the positional data delivered now that SA is inactive.

When SA was on it was implemented by dithering the satellite's clock and ephemeris data to create a UERE of approximately 32 meters. So there was no attempt in the SA On receivers to compute the UERE as it was basically fixed by the implementation of SA. Remember this was first implemented circa 1990 and ADS-B efforts were in draft form when SA was terminated.

Also GPS standards weren't revised just because SA went away. The changes were primarily driven by SBAS and GBAS development efforts not the need for ADS-B. SBAS was the basis for the TSO-C145/C146. The air transport market wasn't very interested in SBAS, they tended to lean towards GBAS (if they cared at all.) The TSO-C196 (SA Aware) is very much like the C145/C146 units but without SBAS. (I'm not really sure of all the history of this TSO as it was after my time working these products.)

Product changes around TSO changes are a fact of life. Trying to upgrade a product from one standard to a new one just doesn't happen as it is by definition a major change and requires a new certification. And even with a new GPS built to a new TSO, it can't be swapped into the aircraft without an STC and that's a major expense.

So, could the original TSO-C129 units be upgraded to be SA Aware (without going to the new TSO?) Theoretically they could, but not economically. Computing the real-time UERE has to be done within the GPS chipset which would require a complete redesign of the custom ASIC at which point it just worth moving to the new standard.

As for the preflight authorization requirement for the SA Aware (C196) units; it's because they don't have the SBAS integrity channel. They rely entirely on an aircraft based integrity process. This can cause periodic cases where the integrity is reported as unacceptable.

The requestor wants to understand the reasoning behind either an operator's or avionics manufacturers business decisions with regard to ADS-B compliance but, does not specify which GPS receiver or provide any information on the aircraft or overall architecture of the onboard avionics. Answering accurately with specifics is hard.

On older transport aircraft early GPS equipage was done a number of ways to support different systems. One of the first uses of GPS was in the navigation system as a sensor for Flight Management Computers. On a lot of old jets, the ILS receiver was removed and multimode receivers that served as both ILS receivers and GPS receivers were installed.

The SA aware requirement came out of the mandate to equip for ADS-B, which is essentially an ATC cooperative surveillance function. Those requirements are often met often by supplying GPS data to an evolved Mode S Transponder. Operational performance requirements have evolved and maybe still aren't universal across the globe (which would matter to a regional operator).

Compliance with ADS-B specifications involves meeting accuracy requirements, system integrity requirements and availability requirements. ATC must have visibility to those metrics to know how to space the aircraft.

In early industry discussions, suppliers and operators recognized that ADSB implementation with a stand alone GPS receiver on an older jet, could result in ATC getting better aircraft position than the crew had for navigation.

The use of GPS for aircraft navigation has steadily evolved from basic area NAV (RNAV) to GPS precision approaches and Required Nav Performance (RNP) procedures which can only be flown in an aircraft capable of meeting the Actual Nav Performance requirements.

Currently, the only practical way to meet the highest ADS-B and navigation system accuracy requirements requires, Satellite Based Augmentation System (SBAS), aka WAAS. Again, depending on which legacy units, upgrade could involve changes to receiver hardware, modified or additional antennas, and additional processing power.

Data requirements for all the different systems that use or capture GPS data are simply not all the same.

Some avionics manufacturers faced with investing significant sums in development and approval costs on a legacy product line with limited growth and marketing potential, found it logical from a business stand point, to abandon the evolution of their legacy product line and develop and deploy a new product with hardware support and processing power to meet all of the current requirements and have growth potential in the market.

1
Why are SBAS-equipped planes exempt from the preflight prediction check?

44
Why don't all commercial aircraft transmit GPS data in real time?
19
Why is there a difference between GPS Speed and Indicator speed?
5
Why did my phone's GPS receiver stop working when the plane was descending to land?
6
Why are there GPS MOCAs?
3
Why do Computer Navigation Fixes still exist now that GPS waypoints can be used to define tracks?
5
Why is there a GPS/RNAV waypoint co-located with a VOR?
2
Why is there a provision of pressure setting in GPS?
14
Do airlines use GPS for critical purposes? If so, why?