In many photographs, the F-4's unique geometry hides one or both engines. I've been told that this is one of the terrific accidental features of the F-4, as it would help shield the hot exhaust from sensors used on heat-seeking missiles.

Is it true that the F-4 was harder to target with heat-seeking missiles due to the shape of the empennage? If so, then why don't modern aircraft use a similar design? 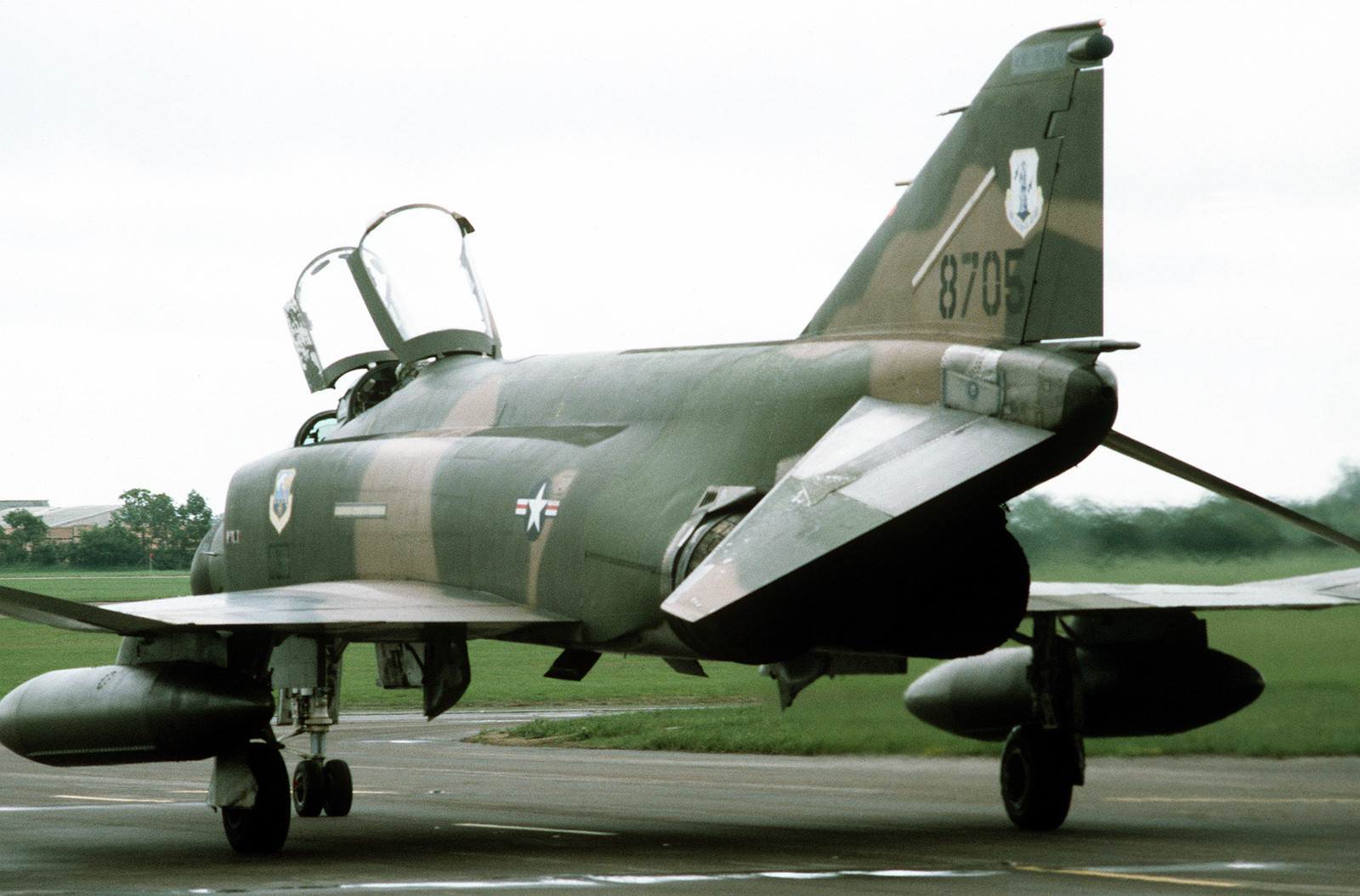 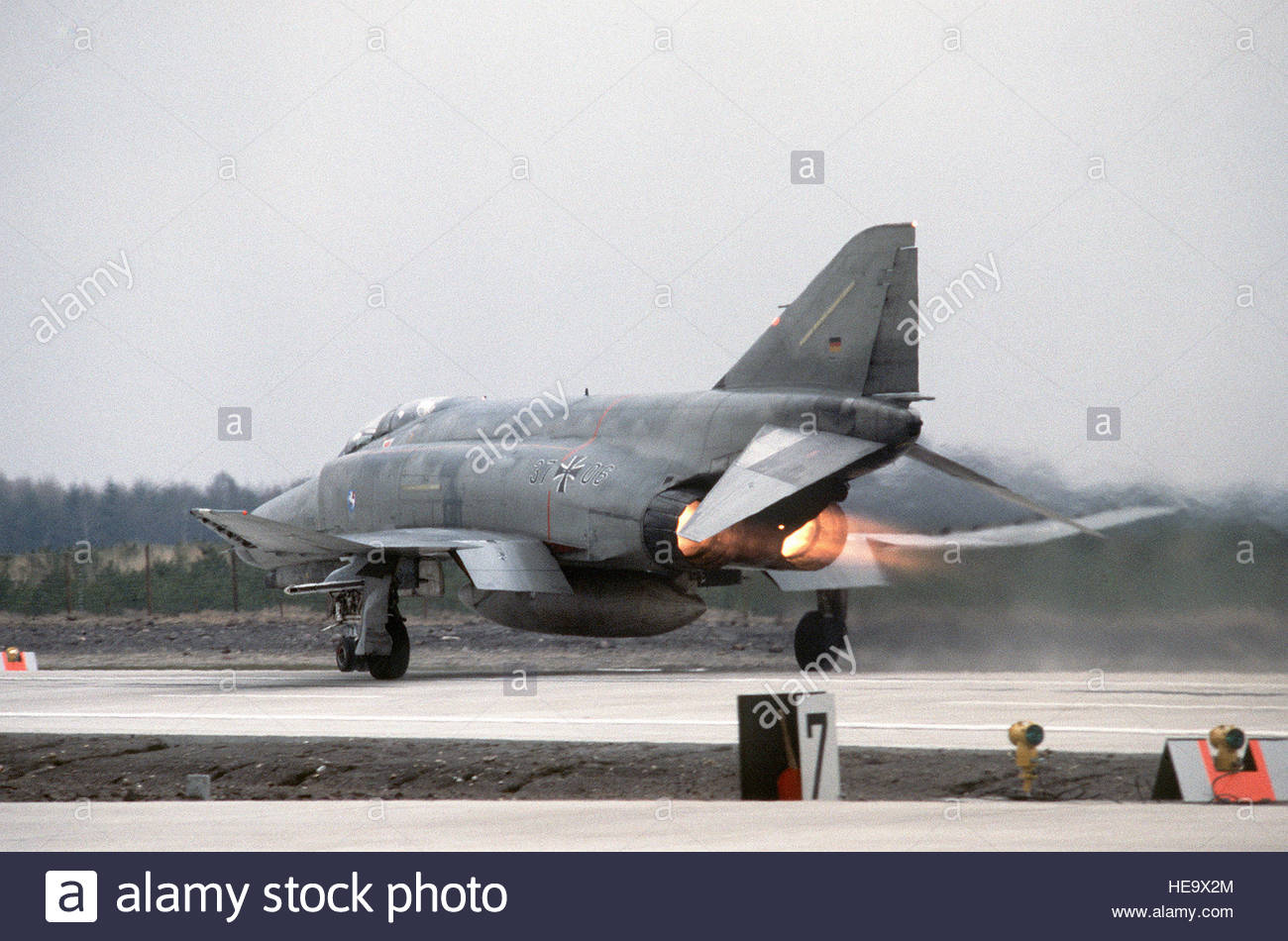 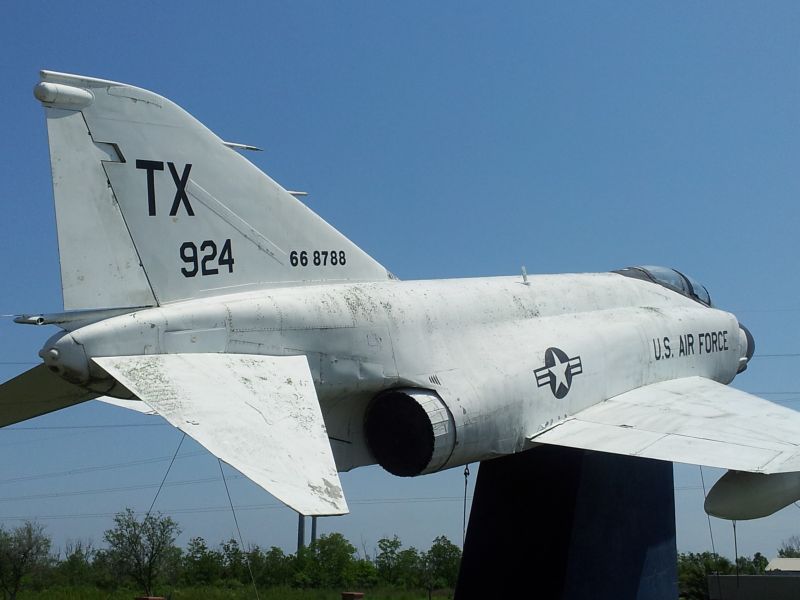 There are a few which do (none of them in production, though) and the reason is the added weight and restrictions in varying nozzle geometry for best efficiency.

The tail arrangement of the F-4 is the result of its heritage. Early McDonnell jets all had the fuselage extended past the engine exhaust in order to shift the engine mass forward, near the wings, so the internal ducting could be as short as possible while the long fuselage held the large amount of fuel required for their initial design as long-range escort fighters. Originally the engines were placed in the wing roots (F2H Banshee) and moved into the fuselage as wings became smaller and thinner while engines grew in size.

Compare the XF-88, the F3H of the Navy, the F-101 Voodoo and the F-110, later to be renamed F-4, and the similarity should be obvious. Other manufacturers like Northrop with their the F-89 Scorpion used the same layout. Like all earlier models, the initial designs of the F4H (the F-4 in the old Navy designation system) used a straight tail. To be fair, at this time IR guided missiles were in their infancy and a low IR signature was not part of the requirements. 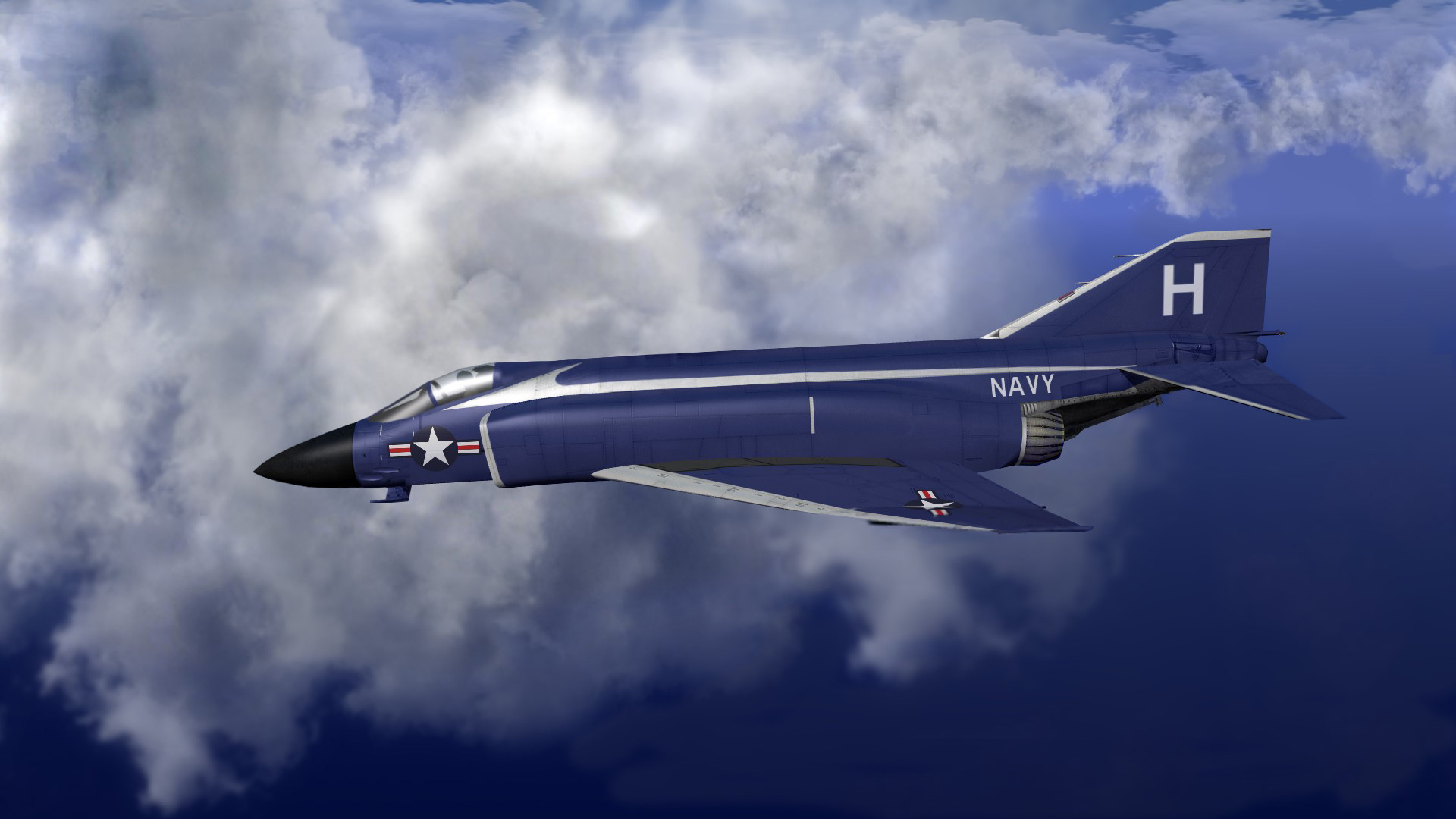 The later addition of dihedral to the outer wings and anhedral to the tail was for aerodynamic reasons, not to improve IR signature.

The biggest threat using IR targeting are small, shoulder-launched missiles which target the airplane from below. The F-4 engine and tail arrangement will do nothing to hide its IR signature from them. There are modern fighter designs which hide their IR exhaust, and they place the exhaust on the upper rear fuselage for the reason outlined above. 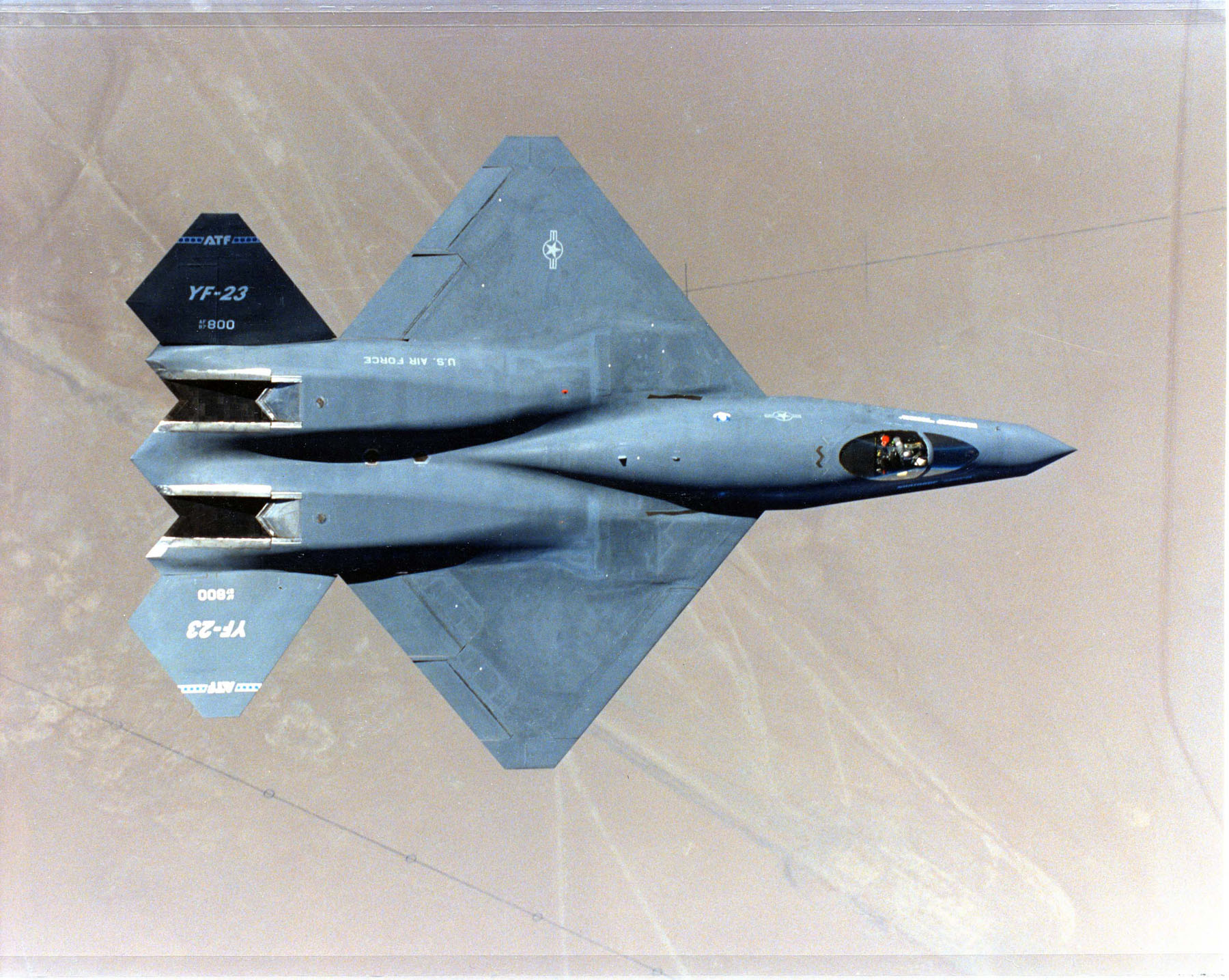 Top view of the Northrop XF-23 (picture source). However, using a rectangular duct for high-pressure flow requires much more mass than a round duct. Also, optimizing this duct for afterburner operation and thrust vectoring is much harder than with a round duct right at the end of the fuselage.

The heat-seeking missiles of the time when the F-4 entered service were fairly limited compared to newer designs, and had to be targeted at an angle where they had a good view of the tailpipe of an aircraft. This changed somewhere around the late 70s when all-aspect missiles were introduced, allowing aircraft to be targeted from other angles as well.

I've never heard the claim that the design made the F-4 more difficult to target, and I doubt that this is true. Nothing is done to hide the IR energy radiated by the exhaust in any way, and the aft end of the tailpipe is visible for anyone with an IR sensor to see.

No. The empennage on the F-4 was never laid out in that manner to shield against IR guided missiles tracking it not could the design aid in doing so. Like the increased dihedral or the outboard sections of the wing the severe anhedral angle of the tailplane is more or less a cheap patch for poor aerodynamic design. The 23° anhedral to the tailplanes were added as a compromise to provide for better control authority at high AoA without requiring a major structural workaround to keep the tailfins clear of hot engine exhaust. You will notice early mock ups of the F-4 had no anhedral angle to the tail plane.

Is it true that the F-4 was harder to target with heat-seeking missiles due to the shape of the empennage? If so, then why don't modern aircraft use a similar design?

I have no comment on the ability of the tail design making the aircraft more difficult to target with heat seeking missiles but I can give a few educated guesses on why this tail design is not often repeated.

The steep downward droop of the stabilizer implies it is producing a downward force to hold the nose up rather than contributing to the lift. Wings on airplanes have this V shape so that the vector of the force the wings produce is upward and inward. Should the plane roll then the wing that drops has more vertical force than the opposite wing, these forces are equal only with the plane level. This keeps the plane on a level flight naturally. An inverted V tail can achieve this same self leveling only if the forces it produces are now pointed down. If the stabilizers were contributing lift then a roll of the plane would produce more lift on the wing that was raised in the roll, this then produces more lift and a positive feedback on the roll making the aircraft inherently unstable.

This was likely an engineering compromise as there is no inherent reason that the tail cannot also contribute lift. There was no doubt a center of gravity problem on the wing placement and it was easier to have this less efficient tail than to redesign the entire airplane.

So, one reason this is not repeated often is because it is an inefficient tail configuration. Another reason for not having an inverted V tail design is that with modern computers it is possible to achieve stable flight without any canting of the wings and control surfaces, this brings higher performing aircraft.

In high performance aircraft like fighter jets the engineers will want to remove drag where they can. The canting of wings to get an inherently stable configuration means that there is an always present inherent drag. On aircraft that carries passengers this inherent safety is an acceptable compromise as it gives a failsafe for a computer failure. On a fighter jet this failsafe is removed because the gain in performance is vital. There will be redundant computers to provide some level of a failsafe against flight control computer loss, just not in the wing and control surface configuration.

This is an inefficient design made no longer necessary with modern flight control computers. I've seen this kind of tail on military drones before. This also appears to be an engineering compromise in getting an existing drone design to carry heavy observation equipment in it's nose without having to redesign the entire craft or make large changes to the flight control computer. With bigger wings, an inverted V tail, and maybe a more powerful engine, they can get something flying with the intended payload quickly.

Not the answer you're looking for? Browse other questions tagged aircraft-design military f-4 or ask your own question.

40
Why does afterburner exhaust have “pulses”?
31
Why don't combat aircraft have rear-facing weapons?
2
Why do most fighter craft have a center stick?
4
Why are the exhaust pipes design on the Ilyushin Il-2 not very popular?
1
Why don't airlines install Faraday cages in their planes?
41
Why don't modern heavy bombers have gun turrets?
6
Why don't most military transports use modern commercial engines?
23
Why do modern fighter jets use 20mm guns?
21
Do fighter jets have deicing in their wings?
4
Are modern fighter jets bulletproof and armored?