How wide would an A330's wingtip vortices be around a minute after landing?

I recently watched MenTour Pilot's new video about the Royal Air Maroc 737 takeoff from Frankfurt several years ago that made the news at the time because it rotated, failed to fly away at high AoA for several seconds, lowered pitch and settled back to the runway, accelerated some more, and then took off normally.

The original video of the incident is here:

In his video, MenTour Pilot suggests that the 737 was prevented from taking off because of the sudden drop in airspeed from encountering the left wingtip vortex of the A330 that had recently landed on a nearly perpendicular runway. However, the original video seems to show the RAM 737 at high AoA for around 11 seconds after its first rotation attempt. At Vr for a 737, that seems like it should burn through 2,000 to 3,000 feet of runway, depending on weight. (135 kt = 228 ft/s, for example)

So, my question is, how wide is each wingtip vortex of a landing A330 around 1 minute after landing? The conditions appear to be almost calm wind. Would each vortex really be thousands of feet wide by that point?

Vortices of large aircraft often move laterally at speeds of 2-3 knots when they sink to within 100-200 feet of the ground.

In calm wind conditions, vortices created by large aircraft during landing operations can remain for many minutes over the normal touchdown area. They can also slowly drift from one runway to a nearby parallel or crossing runway. (NASA; emphasis mine)

Using the two pieces of information above, the vortices start moving laterally at say T+15'. At T+60' (45 seconds later) they would have covered a lateral distance of 150–225 feet. In windier conditions they would travel farther downwind but dissipate quicker.

The day the video was taken (July 23rd, 2016) there were winds in daytime but almost all the reports having the direction variable, e.g.:

Assuming for the sake of simplification that the variable wind lessens the travel/dissipation, and plotting 650 feet (225 each direction + ~200 feet wingspan) on Google Earth on the affected runway, this result is shown below.

The core is surrounded by an outer region of the vortex, as large as 30 metres in diameter, with air moving at speeds that decrease as the distance from the core increases. (CAA New Zealand via skybrary.aero; PDF)

For the core diameter above, that would be a radius of ~50 feet at each end for a large plane. 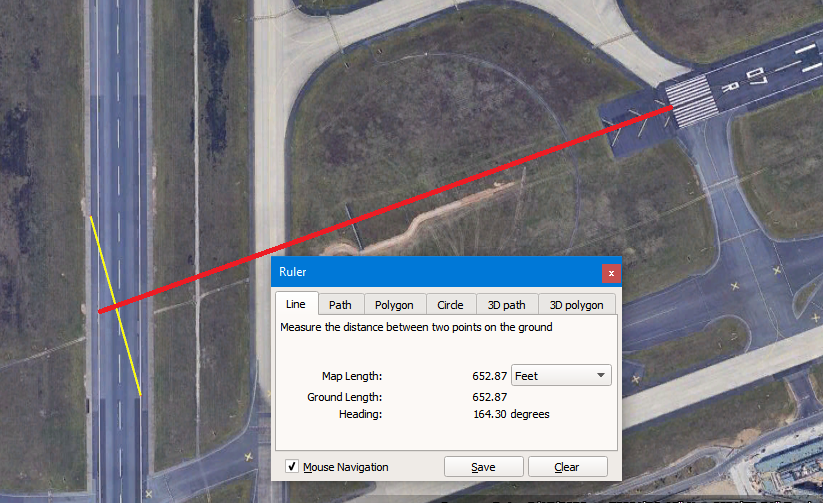 Not the answer you're looking for? Browse other questions tagged wing-tip-vortex airbus-a330 or ask your own question.

45
My windsock is erect, what does this mean?

3
How does the adiabatic cooling of wingtip vortices work?