Where is the fire suppression material injected into a jet engine?

This question is regarding the P&W 4000 engine that was involved in the recent incident on UAL 328, but it doesn’t have to be specific to that engine.

From what I gather in this incident the fire continued after both fire suppression bottles had been deployed. I’m wondering where exactly does the suppression material go into the engine? Does it all flow into the core or is it distributed to different places. Does the loss of the cowl render it ineffective? I expect that halon would only work in an enclosed space. It appears that the fire in this incident was outside the core and without the cowl there wouldn’t be much that could be done in flight to put it out.

I’m wondering where exactly does the suppression material go into the engine? Does it all flow into the core or is it distributed to different places.

It is distributed with some nozzles. But the exact position of them depends on the specific engine. In this slides you can get an idea of the positions for a turboprop engine. They usually cover at least the core, and some other zones that should be separated by firewalls. This image (from Boeing) gives you an idea of the different zones, which I expect they are covered by different nozzles: 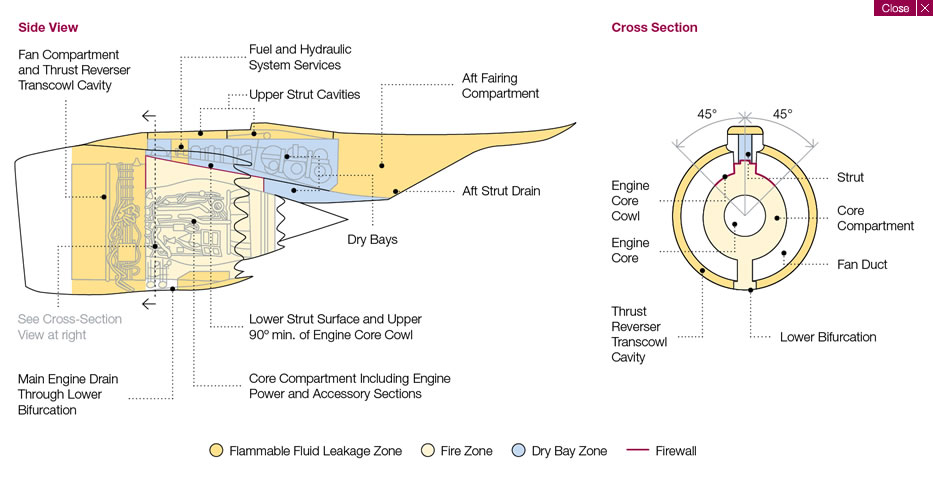 and this image (from the same link) contains the position of the fire detectors, which I expect to be covered by at least one nozzle: 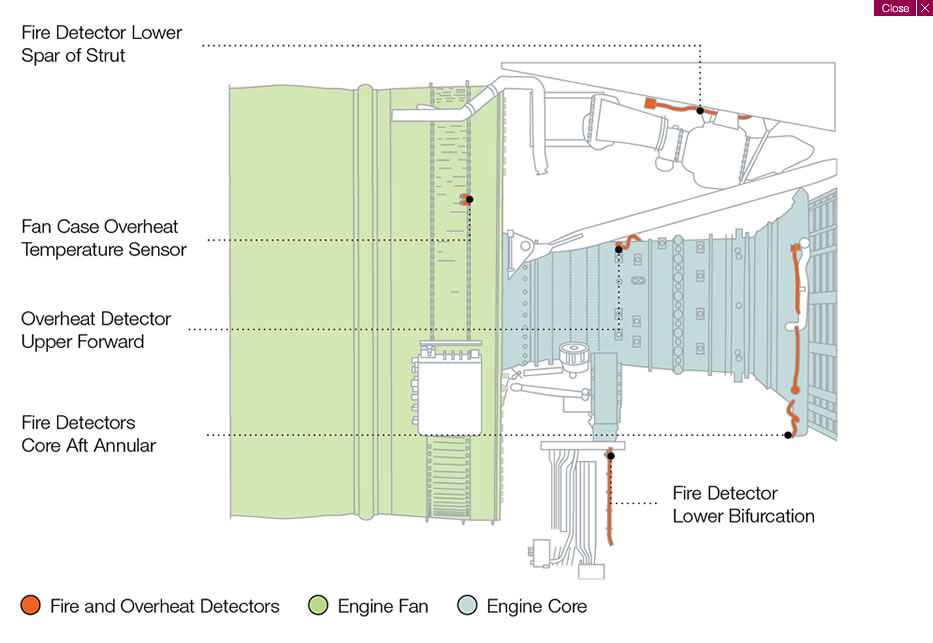 Does the loss of the cowl render it ineffective? I expect that halon would only work in an enclosed space. It

Not the answer you're looking for? Browse other questions tagged jet-engine fire nacelle or ask your own question.

11
How does a fire suppression system work?

9
Is an engine surge classed as an engine fire?
14
How does the pilot check if an engine fire is real?
2
Might a large commercial jet dump fuel if an engine were on fire?
11
How does a fire suppression system work?
27
Why not just drop an engine on fire?
50
Why can't helicopters or Zeppelins drop fire-fighting material on burning buildings?
10
Can an airplane engine fire be extinguished without shutting down the engine?
5
Why would engine fire cause loss of control?
5
Why close isolation valve and APU bleed air for engine fire?