Why was blue hydraulic system chosen for RAT?

Q1. Why is blue hydraulic system chosen for RAT out of the three. Q2. If in case of hydraulic emmergency if I push RAT switch on Emer Elec pannel what will happen

Because in A320 is the only hydraulic system independent from the engines and isolated from the other two hydraulic systems (while G and Y have the PTU in common). Also the B hydraulic system is able to control both elevators and ailerons, while Y cannot control ailerons and G controls only the left elevator. That's a design choice taking in account all the possible failures to reduce the risk of a triple hydraulic failure.

There are two switches that allow you to open the RAT: 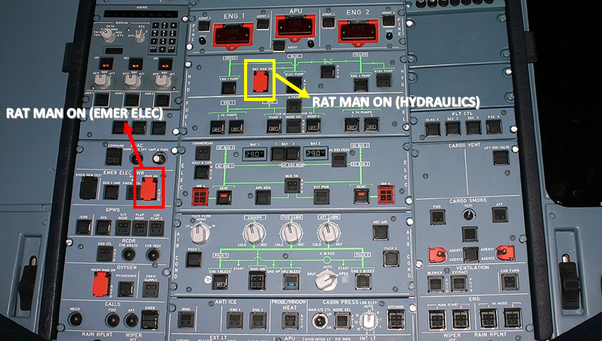 Please also note that in case of a dual engine loss, the RAT is automatically deployed.

Not the answer you're looking for? Browse other questions tagged airbus-a320 hydraulic-system or ask your own question.

16
Why is fuel used as a hydraulic fluid?
4
A320: Why do SDACs supply all three DMCs?
1
What will happen to the IDG disconnection mechanism if we press and hold it for more than 3 secs?
11
Why is it called "STBY RUD" on a Boeing 737?
3
What happens if an aircraft's hydraulic system starts leaking during a flight?
29
Why is the most common hydraulic fluid so poisonous?
11
Why does Thrust Reverser need to be operative during the cargo door operation?
4
Writing Research: What stick sensation would you expect in an Su-15 with a total hydraulic flight system failure?
5
Why does the 737 Original have an explicit hydraulic-quantity indicator for only the A hydraulic system?
5
Why was NWS shifted from green hydraulic to yellow hydraulic system in the A320?