Why nitrogen generation system is only present in centre tank only?

I was going through FCOM of A320 and it mentioned that nitrogen generation system is only there for centre tank and not for wing tanks what is the reason for the same?

The inerting system was added to the A320 as a result of a new FAA regulation in 2008:

Airbus found that only the centre tank was affected by these thresholds required by the FAA:

AIRBUS COMPLIANCE TO THE RULES

Airbus demonstrated that ‘only the centre tank’ of some of its existing aircraft has fleet average flammability exposure exceeding 7% and is affected by the requirements of the FAR Part 26. There is no necessity to do any modification on other tanks. It concerns the following aircraft:

What exactly does fleet average flammability exposure mean? The FAA defines it as follows:

Since the centre tank is usually used first, it will spend more time empty (or almost empty). Fuel vapour is highly combustible (much more than liquid fuel), so the risk is significantly higher for the centre tank.

By the way, the system is not really a nitrogen generation system. It only enriches the nitrogen content of some HEPA filtered bleed air to reduce the oxygen content:

It is the core of the Inert Gas Generation System. The objective is to reduce the centre wing tank ullage O2 concentration to below 12% during most conditions. Each ASM is a semi-permeable hollow fibre membrane bundle contained in a pressure containment canister. This canister is a cylinder with three ports. There is only one ASM on the A320 Family aircraft, two on the A330-200 and A340-200/300, and three on the A340-500/600. 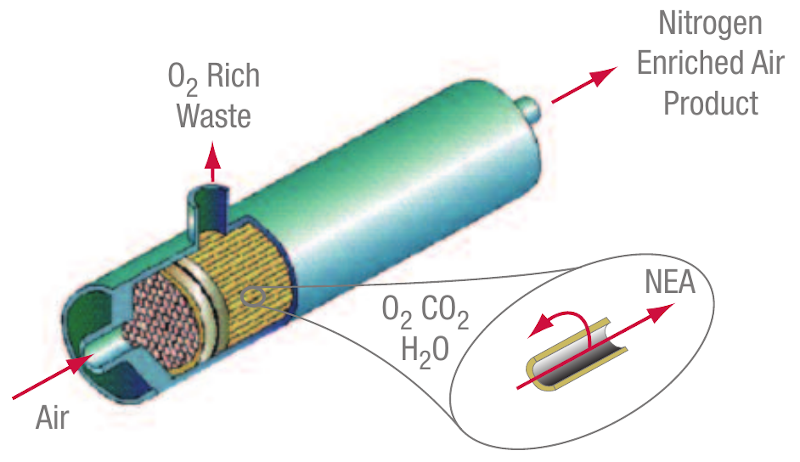 Worthy of note is the proximity of the centre fuel tank to the air conditioning packs. On some aircraft this can cause additional heating of the centre tank in high temperatures with packs running to cool the cabin for long periods of time.

Not the answer you're looking for? Browse other questions tagged airbus-a320 fuel-systems fuel-inerting-system or ask your own question.

15
What could the fuel pump failure have been that my flight experienced?
4
Why do the A320's centre tank pumps stop working 5 minutes after the low level has been reached?
10
Why would the outer tanks fuel on the A320 be colder than the inner tanks?
0
Why doesn't the Convair 580 have check valves to prevent inadvertent fuel transfer?
4
Why do we have to check that the fuel x feed is properly functioning before departing for an ETOPS flight on the A320?
5
How much unusable fuel is in the A320?
3
What is the difference between LP fuel valve and LP fuel shut off valve?
6
How does a fuel density sensor work? (densitometer, cadensicon)