Could you use radial blowers to propel a model aircraft?

I was inspired by stealth planes like the Boeing Phantom Ray:

I'd like to make a model aircraft that's as thin as possible, and has integral engines that are not visible from the outside. I have been wondering how this might be possible.

One way might be to place a radial blower in the centre of the fuselage. Radial blowers suck in air through their rotary axis, and blow it out the sides. 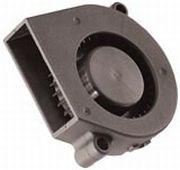 Usually, they are housed so that air is constrained to come out in one direction. However, you can always give the air two exit ports. 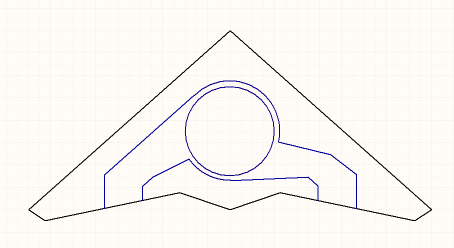 single-engine model-aircraft
Share
Improve this question
edited May 3 '15 at 0:55

Interesting question, and I can only answer in general terms because much depends on speculation.

Radial-flow compressors are very light and achieve high pressure gains per stage. However, the simple plastic thing in your illustration will not have good efficiency. Generally, cambered blades are better than straight blades, and the thinner they are the better. Thick blades block more of the flow path. The drawback is their high diameter, and by placing the blower on its side, you get around this obstacle in an elegant way.

The idea of using two exhausts complicates things; if you use a single one, you can avoid problems due to unsymmetrical thrust. Given that the compressor runs in one of two directions, asymmetries will be very hard to avoid. By placing vanes into the exhaust you can actually give the model plane some degree of sideways thrust vectoring. Also, two flow channels will have more surface area per cross section than a single channel. Your losses will be higher if you use two like in the illustration because they are longer than necessary.

The same goes for the blower: A single, larger one will always be more efficient. The gap size in a small blower is probably relatively bigger than that of a larger blower, and gaps are real efficiency killers.

Another efficiency killer is flow separation in the ducts. Make sure that cross section changes are gradual and avoid bending the flow as much as possible. It will probably help if you install cambered guide vanes at the entry of the exhaust to convince the rotational flow to change direction and leave the round compressor chamber.

Suction on top is also interesting. There have been many ideas about boundary layer suction to increase maximum lift, and your turbine inlet will certainly help to remove some of the boundary layer where it will separate first. Normally, turbine intakes are placed where the normal flow field already shows some pressure increase due to ram effects, but at the speed of a model airplane this will not be a factor. I expect the best intake in your case is a hole on top of the aircraft with nicely rounded edges. Those rounded edges should already produce some lift, and the whole configuration will probably achieve a higher stall angle of attack when the engine runs at full power than at idle power.

I can only speculate how much power will be converted to thrust, but I bet placing an ordinary propeller at the usual place will be more efficient. But the configuration you propose has its own merits.

Some smaller turbine engines actually do use centrifugal compressors for various reasons. In larger turbines they become impractical, but that wouldn't affect this application.

The centrifugal fan causes the air flow to turn 90 degrees. In computers this can be good, mounted above a heat sink, where they draw air through the heat sink, and then sideways out the exhaust (or sometimes vice versa). Efficiency is not as important. In your application, the aim of the propulsion system is to increase the air velocity versus the air moving past the plane. The fan is making the air turn 90 degrees to come into the fan intake, and then 90 degrees back to exit the exhaust. The turns in the air flow will introduce losses in the flow, and it's much easier to make smooth flow in and out of an axial fan than a centrifugal fan in this case. A centrifugal fan can also be a heavier installation than an axial fan.

In general, one fan will probably be more efficient than two, because you would be adding weight for the installation parts, wiring, etc., of the second engine, and not gaining much unless you really need the power of a second engine, or have some redundancy/configuration requirements.

I think an intake on top of the fuselage would hurt performance more than help it. By disrupting the air flow, it would probably cause more reduction in lift and increase in drag than the low pressure intake would benefit it. Having an intake more like the one in the above picture that just feeds a centrifugal fan rather than an axial one would probably be a better option.

Having one exhaust will probably be a more simple design. Guide vanes or even a vectored exhaust steer the exhaust better if needed.

Aside from the issues in the integration:

Here is a comparison of various parameters for axial vs. centrifugal fans. The backward-inclined flat blade configuration shows a graph that is actually relatively similar to the axial fans, aside from the power curve. Als, here are a couple interesting summaries of axial fans and centrifugal fans. They have a more industrial focus, but still have some relevance.

The definitive answer is YES, as demonstrated by this guy who built one:

Not the answer you're looking for? Browse other questions tagged single-engine model-aircraft or ask your own question.

7
Can foreigner fly model aircraft (quadcopter) in US without being part of an organization (like AMA)?
39
Why do model aircraft fly and maneuver so differently from real aircraft?
7
How high can I fly a model aircraft under 14 CFR 101 rules?
7
What kind of antique WWI aircraft model is this? Inventor's prototype?
0
RC airplane required engine power