What is the effect of thrust vectoring effect on the rate of turn?

I just got a question after reading my old Principles of Flight book. The equation for the rate of turn is $\textrm{ROT} = 1,091 \cdot \frac{\tan(\phi)}{V}$, with $\phi$ denoting bank angle and $V$ denoting airspeed

How would that change when the airplane is equipped with thrust vectoring like the F22 or SU35? Is there an equation for that?

The standard equation applies to any coordinated level turn (so that the G felt is "straight down" to an occupant of the aircraft, in an aircraft frame of reference). Matters not how it's all achieved - flaps, high-lift devices, helo rotor, thrust vectoring, whatever... a coordinated level turn at "this" bank will take "this" much radius. And it will have a calculable G load.

Actually achieving (and sustaining) that G load may take all sorts of interesting effects, such as thrust vectoring. But once you're there, the standard equations apply.

And, if you choose to fly an un-coordinated turn, with some amount of side-loaded G force (example, a car turning at high speed... no appreciable "bank angle" so the G force pushes you toward the outside of the turn), then all the standard assumptions are out the window. At that point, your radius would be a function of G & not bank... and it'd get uncomfortable really fast!

With thrust vectoring you no longer turn (as in: the wing creates the force that accelerates you in the desired direction) but you do post-stall maneuvering. Next, you need to distinguish between highest instantaneous turn rate (trading altitude for higher rate) and continuous turn rate (which is limited by the available thrust in most cases). 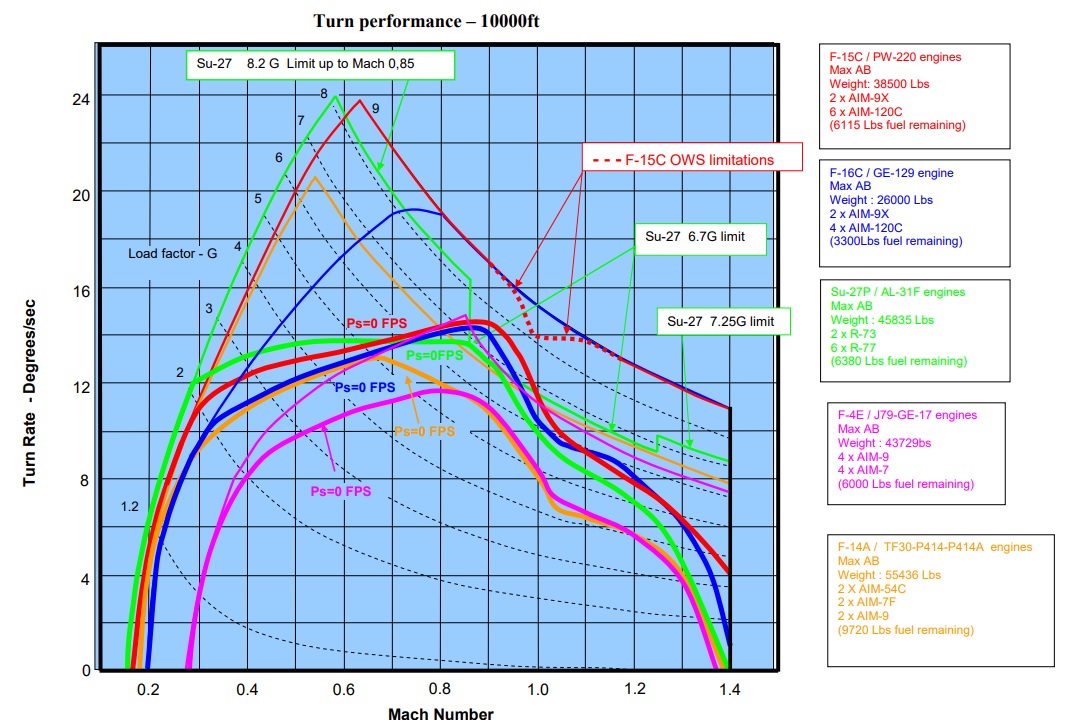 Turn rate diagram (picture source). It plots flight Mach number on the X axis over turn rate on the Y axis. The bold colored lines show the sustained turn performance of several airplanes. At low speed the turn rate grows in proportion to the maximum possible load factor that the maximum lift of the airplane is capable of. The kink in the lines at around 10 - 12 degree per second shows the thrust limit - in order to fly tighter turns at even higher load factors, more than the installed thrust is needed. Now the curves run almost horizontal along the thrust limit and decline again at high Mach numbers, first at the speed of sound and then when supersonic drag cuts down the possible load factor.

The thin colored lines show the instantaneous turn rate, when altitude loss is permitted. The sharp peak at the maximum load factor (for example 8g for the Su-27 and 9g for the F-15) marks the maximum turn rate when thrust is unvectored and wing lift is used to force the change of direction.

With thrust vectoring the airplane can fly a direction change in a totally different way. It will pull up to reduce speed, then rotate using vectored thrust when flying at low speed in a zero-g parabola. When the fuselage points at the desired direction, it will use the altitude gained in the pull-up to accelerate again, now in the new direction. Now the turn rate depends on how quickly the speed can be reduced and how long it takes to build up new speed. The rotation itself only needs a second or two.

Since a conventional turn also requires to slow down and missile engagement can start as soon as the fuselage points towards the adversary, post-stall turns using thrust vectoring give a decided advantage in a dogfight with missiles.

Not the answer you're looking for? Browse other questions tagged aircraft-performance aircraft-physics flight-dynamics flight-mechanics thrust-vectoring or ask your own question.

7
For light, GA aircraft, is there a “standard” turn, and what does that mean?
11
About climb: If we use T/W as input, the second grade equation yields two solutions for W/S. Are both solutions realistic?
6
Why are yaw rate and pitch rate obtained by these equations?
10
How does turn radius change with velocity between Vm and Vs, as in a 180 degree turn in a canyon?
4
How can I compute the minimum possible bank angle for a turn with a given radius?
0
What does it mean “two plane thrust vectoring nozzle”?
3
Is the turn radius at fixed bank angle really independent of aircraft type?