A bit of digging into the 7Z9363 accident investigation has brought up some interesting information regarding the DC-9-80 ("MD-80")'s flap system:

Flaps may be positioned in any of the six permanent detents in a 0 to 40-degree range by movement of the Flap/Slat Handle. The authorized flap settings for takeoff in the MD-83 were 4, 6, 11, 15, 17, 20, and 24.73 A “Flap T.O. Sel Wheel” on the center pedestal would allow the pilot to further position the flaps from the position selected by the Flap/Slat Handle position anywhere in the 0- to 13- and 15- to 24-degree range.74 This was used to set the final takeoff flap setting, as determined by the runway analysis review for the airport/runway.

The aircraft has an inboard and an outboard flap on each wing. The flaps are mechanically controlled and hydraulically actuated. The crew moves the flap lever to the appropriate detent depending on the flight condition (i.e. take-off, landing). The flap lever has fixed detents at UP, 0, 11, 15, 28, and 40. The lever can also be positioned in one-degree increments for takeoff settings using the Dial-A-Flap from 0 to 24, except for a small do-not-use range at 14. Through a series of cables and pulleys, control valves are exercised and provide hydraulic pressure to the flap actuators to extend or retract the flaps. [Systems Group Chairman's Factual Report, NTSB docket DCA17FA076, page 59, section headings bolded in original, other emphasis mine.]

Reinforcing this prohibition, the DC-9-80's takeoff-flap selector wheel has a yellow "DO NOT USE" label covering the space between the 13-degree and 15-degree markings: 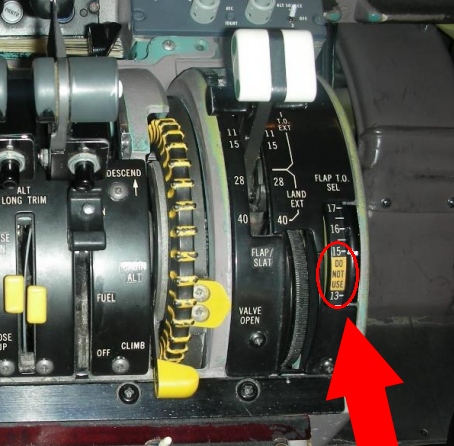 (Image originally by the National Transportation Safety Board [it's on page 32];1 cropped and red-ovalled by me.)

Why does the DC-9-80's flap system come with a prohibition against using flap settings between 13 and 15 degrees for takeoff?

1: The underlying photograph was taken by NTSB personnel, and the red arrow was added by the NTSB to point out the selector wheel in question.

Given the above and the analogue nature of the input (dial-a-flap), between 13 and 15° the slats are very likely not to settle on a position.

What happens at 14°? Simply "Do Not Use". The slat is both alive and dead.

a: the DC-8 slots failed to produce the desired pitch-down on the DC-9 during development; tests revealed it was due to the lack of engine pylons; further experiments led to the invention of mini-pylons – the vortilons[4]
b: counting the retracted position

How can the narrow-body MD-80 be compared to the much larger tri-jet MD-11? The underlying high-lift system is practically unchanged since the 60s:

Not the answer you're looking for? Browse other questions tagged takeoff flaps aircraft-limitations dc-9-family or ask your own question.

13
What is the meaning of flap detent names (e.g., 10 degrees)?
18
Why do slats deploy first?
15
Is it normal practice to use 25 degrees of flaps when taking off at max weight in a PA-28-181?
13
Why did the flight Osaka -> Frankfurt circle above the airport after taking off from Osaka International?
0
Why does the DHC-6 pitch down when the flaps are retracted, rather than up?
5
What is the difference between an aileron and a flap?
1
Why does the DC-9's antiskid system have to be manually disarmed during landing rollout following a ground-shift-mechanism malfunction on takeoff?
2
Does the flap settings for the best lift/drag ratio change with speed on the Diamond DA20-A?
5
Does the MD-90 use a different elevator system from the other DC-9 versions?