What do these double Class Bravo airspace floor and ceiling limits mean?

While browsing SkyVector I came across these double Class B airspace limits within the same section (is that what you call it?). I'm wondering what it means and what the difference is between this and FL145/SFC. 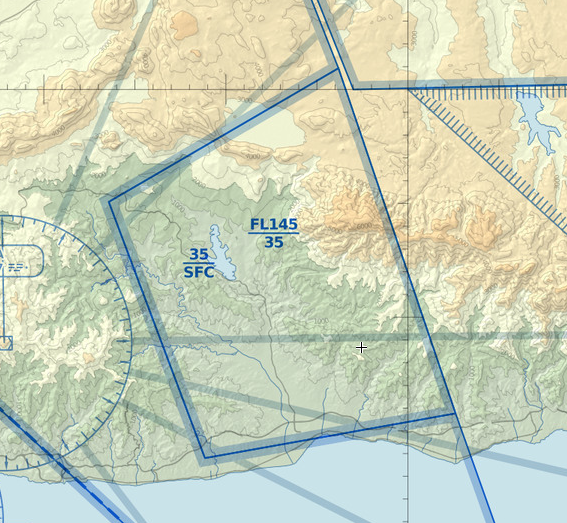 The way SkyVector shows airspace is subtly different than shown on FAA charts. Whereas the FAA shows the combined limits in each area, SkyVector shows the limits once for each layer, even where layers overlap.

So, what you are probably seeing here is one area of FL145/35 on top of another area of 35/SFC, possibly disjoint but the labels for both areas just happened to end up near each other. Or, it may be two areas with the same boundaries but different owners or airspace classes. As a result, it’s often difficult to figure out exactly which area(s) each label applies to.

Note that while SkyVector uses official maps from the FAA in/near the US, the rest of the world is computer-generated and not nearly as useful, especially since other countries often use airspace classes in vastly different ways that can’t be represented well in SkyVector’s pseudo-FAA style. Notably, they use blue for all classes, which often confuses folks used to the FAA’s color scheme.

VFR traffic is not allowed, except for State aircraft, helicopters, medical and rescue flights.

9
What is the benefit or motivation for having Class G airspace?
6
What separation and information does ATC provide in different airspace classes?
12
Is it possible for a non-towered airport to have keyhole extensions Class E starting at the surface?
4
What exactly is the airspace above CYYZ (Toronto)?
10
What is the purpose of this interesting pattern of class E airspace in northwest Alaska?
0
What requirements aren't met, that would designate an airspace to be Class E instead of A, B, C, or D?
10
What is the primary reason that the non-towered airports ACV, TVL, SGU, BIH, and SIT/PASI have E4 extensions to E2 airspace?
4
May the Class-E-to-surface airspace near Eagle County Regional airport (KEGE) and Marshall AAF (KFRI) be ignored when the tower is open?
3
In the US, can airspace simultaneously be E2 and E4? What happens at KSTC to the airspace in the dashed magenta boundary when the tower closes?
2
What does "outside controlled airspace above 1200ft AGL" mean?