Gross weight determines RPM at a given collective pitch. At high gross weight, more blade pitch is required to maintain a desired RPM, so higher gross weight results in a slower rate of descent, assuming all other variables remain the same.

So high gross weight decreases descent rate. That's unintuitive to me, so I'm trying to build a logical path. I know from experience that making tight turns during an auto causes RPM to increase. Tight turns increase positive Gs on the aircraft, which is equivalent to increasing weight. So higher gross weight will tend to increase RPM, requiring the pilot to raise the collective (blade pitch) to maintain RPM. There's question 1: why does increasing weight (or G loading) tend to increase rotor RPM?

The second logical step is how this required increase in blade pitch will decrease the rate of descent. I understand that increased blade pitch increases AOA, thus increasing the lift produced by the rotors. However, this increased lift is opposed by the increased weight that started this whole discussion. Here's question 2: for a given increase in weight, is the resulting increase in lift larger? This seems to be the only way to achieve a lower rate of descent. 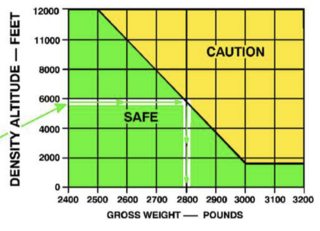 This chart indicates that at a given density altitude, it is unsafe to be too heavy during an auto. I assume that the danger is related to the flare and touchdown, since during the descent it seems safer to have a lower rate of descent. My intuition tells me something about how the rotors store energy as RPM during the descent, and the flare and touchdown dissipate that energy in order to slow the helicopter's forward and vertical speed. It seems intuitive that a heavier helicopter will require more energy to slow, which means at and above some threshold weight, the helicopter will not be able to flare enough to touch down gently. But, is there a more rigorous explanation for high gross weight being dangerous at the "bottom" of the autorotation, i.e. how energy is stored and dissipated in the rotors?

With increased weight, the descent rate will indeed increase at the same collective input (the same main rotor blade pitch angle). The rotor speed will increase as well as the upflow through the rotor increases. I think your intuition is good with this, right?

Now, let's say you want to reduce the rotor speed back to what it was at the lower weight. You'll need to increase collective, which slows the descent rate (and RPM) by increasing lift on the main rotor blades. Once you are holding the original rotor speed, how do you know the descent rate will be smaller than the original descent rate? This is a bit trickier to see, but one way to see it is to draw a diagram of an airfoil on a cross section of the main rotor from both the original (light weight) and new (heavier weight, same RPM) condition.

You know the flow of air in the plane of the rotor is the same (same rotor speed) and the net torque is the same (still no engine power). The magnitude of the drag is also about the same for a reasonable airfoil. What's different is the longer lift vector and the flow of air up through the rotor. The only way for this longer lift vector to not accelerate the rotor (to a higher RPM), is for it to be "tilted up" slightly. Since this lift vector is perpendicular to the new flow (and the RPM is the same), it's tilted up by decreasing the descent rate.

If you look at the situation in terms of power, an increase in weight (or any increase in loading) requires more power. As you don't have this power, the helicopter will descend faster, more air will go through the rotor leading to an increase in RPM. Hopefully this increase in RPM will provide enough lift to stabilize the vertical speed. Increasing the pitch to maintain the RPM within limits provides lift in a slightly more efficient manner so the vertical speed will be slightly reduced (compared to the situation of descending with the collective flat down and RPM screaming over the limit)

That said, I find the affirmation in your book very confusing. Maybe I'm missing something, but a heavier helicopter will descend faster than a lighter one under the same conditions. It needs more power to fly and the only way to get it is to descend faster. That makes landing more dangerous, because you have more vertical speed to offset during the flare and more weight to cushion before touchdown. If increased weight and increased rotor loading would provide lower descent speed I guess everybody would autorotate in fully loaded helicopter and doing tight turns all the way to the ground :)

Not the answer you're looking for? Browse other questions tagged aerodynamics helicopter auto-rotation or ask your own question.