How big a risk is to abort take-off before V1 with uncontained engine fire and side-wind?

The Blue Panorama flight 1504 had uncontained engine fire just before V1 during take-off. The pilot continued the take-off and succesfully landed the plane with one engine. In the TEDx talk the pilot Maurizio Guzzetti explained that he thought that if he had followed the official protocol he would have aborted the take-off and the heavy sidewind would have pushed the heat from engine fire to the cabin and caused the cabin to catch fire and result in casualties. Instead he decided to take the plane to air, turn the plane around and land with the other side to the wind before stopping the plane. Note that the plane was over the maximum landing weight and no ability to dump fuel.

Do you think that this was a real threat and if so, what should a pilot do with similar fire starting with slower speed? Assuming the fire cannot be contained and heavy side-wind is there a reason no believe the cabin will not burn, too? However, if you're a lot before V1, it really wouldn't make sense to try to complete take-off with only one engine.

A well made animation about the accident: Bursting into Flames Just Before Takeoff in Rome | Season Finale [Real Audio]

If it happens at a slower speed as you ask, then maneuvering the plane on the runway as it stops would help, even if it's only a 45-degree turn. You might wonder why not do a complete 180 if the runway width allows; that turn is slow and takes valuable time, while a fully loaded plane can theoretically be evacuated in under 90 seconds with only half the exits. It's a smaller risk considering the low-energy abort. A high-energy abort adds the risk of the brakes starting another fire.

As to Flight 1504, there's no need for opinions, as the final report did not fault the commander's decision:

The management of the failure by the flight crew was carried out professionally and in compliance with the established procedures. The same applies to the air traffic controllers, who assisted the aircraft with professionalism and providing maximum cooperation. The commander decided not to interrupt the take-off run despite the right engine fire warning having intervened a few knots before V1, thus exercising the expected discretion and taking into consideration all the available elements that favored this decision. [translated from Italian; emphasis added]

Speaking of Go shortly before V1, it is advisable for tire failures due to the compromised braking: 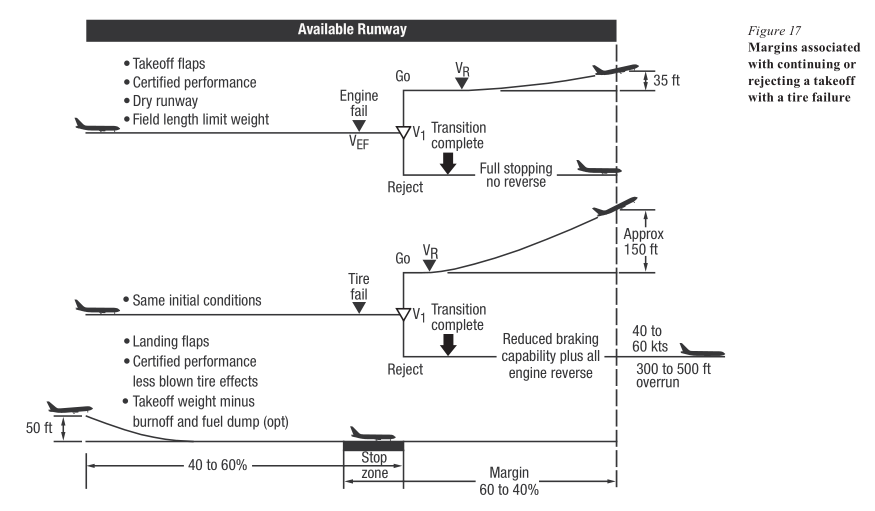 Not the answer you're looking for? Browse other questions tagged takeoff fire rejected-takeoff or ask your own question.

26
How are evacuation tests made as realistic as possible?
20
Why is the takeoff decision point based only on speed and not time or distance?

16
Why don't airlines provide smoke hoods?
13
Can a commercial airliner be too heavy to take off?
8
Is it safe to fly on airplane with lithium batteries in cargo hold?
17
How high does the ground effect last?
1
Can the pilot stop airflow between cockpit and cabin?
3
What does 'laterally aligned' mean in this description?
28
Has someone with no experience at all ever taken off in a plane? Could they?
3
What is the correct procedure for operating the engine fire extinguishers on an ATR72?