Have attitude indicators ever had triple failure in a commercial aircraft?

I'm wondering about couple of well known crashes (mainly AF447 and AirAsia 8501) and thinking: is there any case where triple redundant attitude sensor failure has ever occurred? In those accidents it seems that the pilots assumed that they cannot trust the indicators and forced the airplane to stall to ground.

I understand that air speed sensors can have triple failure (e.g. AF447 had such a situation for a minute) because those depend on measuring external environment. However, the attitude indicators are fully closed system which doesn't require any external inputs. As a result, having failure of three fully independent attitude sensors at the same time looks impossible to me.

Yes! More or less, it depends on your definition of failure (see later).

As you said, the probability that three Inertial Reference Units (IRUs) fail is extremely rare. This is because IRUs are self-contained, internal to the aircraft, and independents. Instead, air data probes are subject to ice and external factors (for instance, bird strikes), thus more subject to faults. The IRS failure probability is so low, that in the non-neo A320/A330 the ECAM message "TRIPLE IRS FAILED" doesn't even exist (it shows all the three messages: IR1+IR2 FAULT, IR2+IR3 FAULT, IR1+IR3 FAULT). 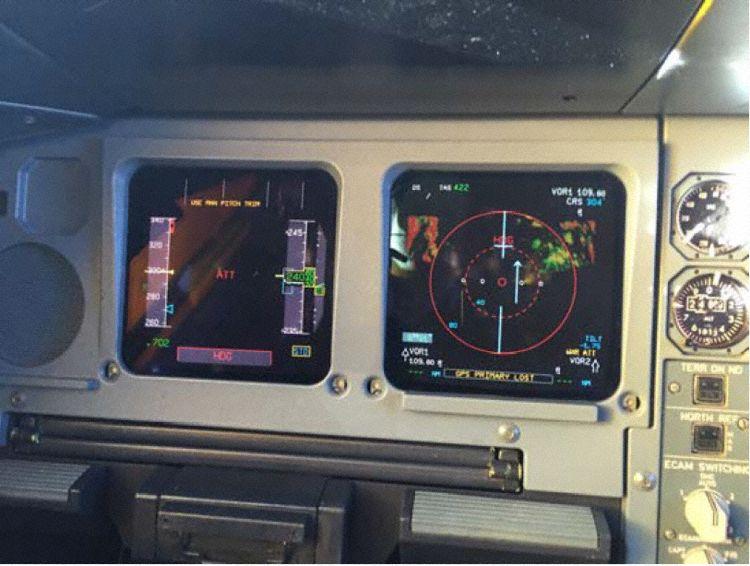 According to the BEA report of the F-GRSQ incident (published in 2018), only 2 triple IRU failures incidents in Airbus aircraft happened since 1999: this one and another one in 2002.

In both cases the reasons of the triple failure are unclear. However, the BEA report suggests that the triple failure was triggered by erroneous pilots actions responding to a single IRU failure. In the F-GRSQ the possible explanation is that the pilots identified IR2 drifting too much and decided to switch it to ATT mode (degraded mode, providing only attitude), but they erroneously switched IR3 to ATT. Hours later, when IR2 drifted too much, Autopilot and FBW computer detected the data inconsistency and started to consider IR2 as failed, while IR3 was in ATT mode (and then not used by AP/FBW). Probably, at this point, by following a non-standard procedure, the pilots tried to restart all the IRs to regain the position on Navigation Display, including the working IR1, which then lost alignment and caused the triple failure condition. Unfortunately, the lack of CVR recordings didn't allow the verification of this theory, but no malfunction was found in IR1 or IR3.

I don't think that pilots thought it was an IR problem in the sort of incidents you mentioned.

After occurrences such as AF447, industry study has concluded that

Typical Upset scenarios are not caused by failures of the IRS/attitude reference and modern technology and system architecture do not generally give unreliable info, they either work, or they don't, not anything in between.

Let's assume the case of triple IRS failure, it's surprising that we haven't referred to the 'standby' flight instruments. These include attitude and heading from independent sources and are DC driven (= will continue working on loss of all AC elec power, ie batteries only). The point being made is that it is very rare to have no attitude data. Procedures are based on comparing the LH and RH PFDs to the STBY, and taking the 2 that match to be correct and "switching out" the other.

The conclusion is that ICAO has mandated UPRT, Upset Prevention and Recovery Training, and this is probably the only way to escalate the problem sufficiently in the minds of pilots. Pilots have been lulled into a strange state of ennui, due to the genuine overall improvement in safety due advances in technology and procedures.

Not the answer you're looking for? Browse other questions tagged flight-instruments accident-investigation redundancy or ask your own question.