Over the last few hours, I've been trying to intuitively understand induced drag, and how aspect ratio affects it. I already know the equations, but while they explain the relationship, they do not really explain anything, I want to understand what is happening physically. I've read on many answers in this community, specially by Peter Kämpf, but I've been unable to attain an intuitive understanding.

I will explain my line of thinking, hopefully I can be corrected on any misconceptions, or wrong assumptions.

First of all, my way of thinking about lift is simply airflow being redirected. If airflow is redirected by a surface, a force in the opposite direction is applied on said surface. This means that for lift to be generated, downwash must exist, therefore induced drag is an inseparable side-effect of generating lift. 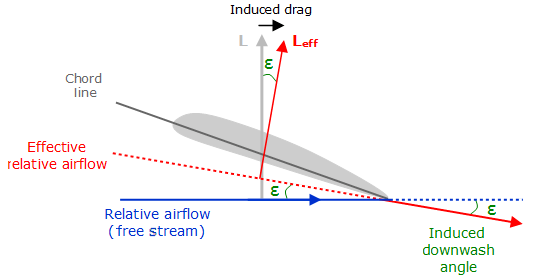 Let's imagine 2 theoretical wings, both of which have the same area, but differ in aspect ratio. If induced drag depends on the downwash angle, why would a longer wingspan reduce the angle? If the downwash angle is reduced, then the amount of air being redirected (total mass) must increase to keep lift equal, how can that happen when the wing area is equal?

All of the sources I am able to find blame induced drag solely on wingtip vortexes, since they cause downwash, but the entire wing is creating downwash, so what gives?

Let's imagine 2 theoretical wings, both of which have the same area, but differ in aspect ratio.

Then the wing with the higher aspect ratio also has more span. This is what counts.

If induced drag depends on the downwash angle, why would a longer wingspan reduce the angle?

Because the wider wing will affect more air. Think of the air affected by the wing as what flows through a tube, the diameter of which equals wing span. Like in the picture below. 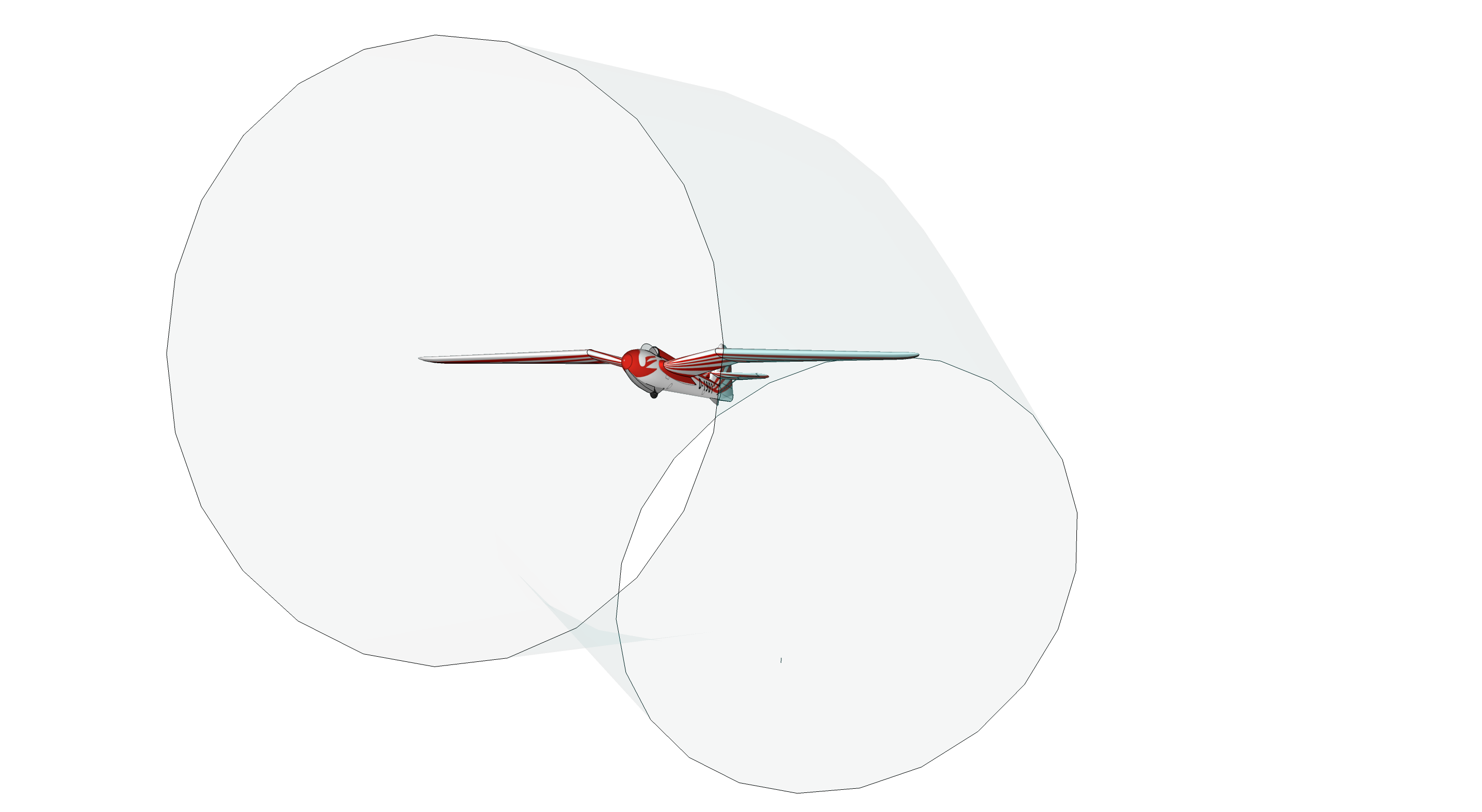 Of course, for clarity, the amount of bending the stream tube undergoes due to the wing is greatly exaggerated here. In reality it is a few degrees at most.

how can that happen when the wing area is equal?

Wing chord does not count here as long as the amount of stream tube bending can be done by the skinnier wing. More chord will not affect the result. Only when too much is being asked of a limited chord will the wing stall. At lower lift coefficients, more chord will only increase friction drag.

In reality the influence of the wing fades the more you move away from it. This picture of a stream tube is a simplification which you will also find in propeller theory, and it gives the correct result, because what you neglect in the far field you compensate by assuming a constant influence over the near field.

You do well to disregard those sources. They have the causality backwards.

As you can see low aspect has huge area of pressure loss,to compensate pressure loss wing must fly at greater AoA to get same lift,which increase induced drag. 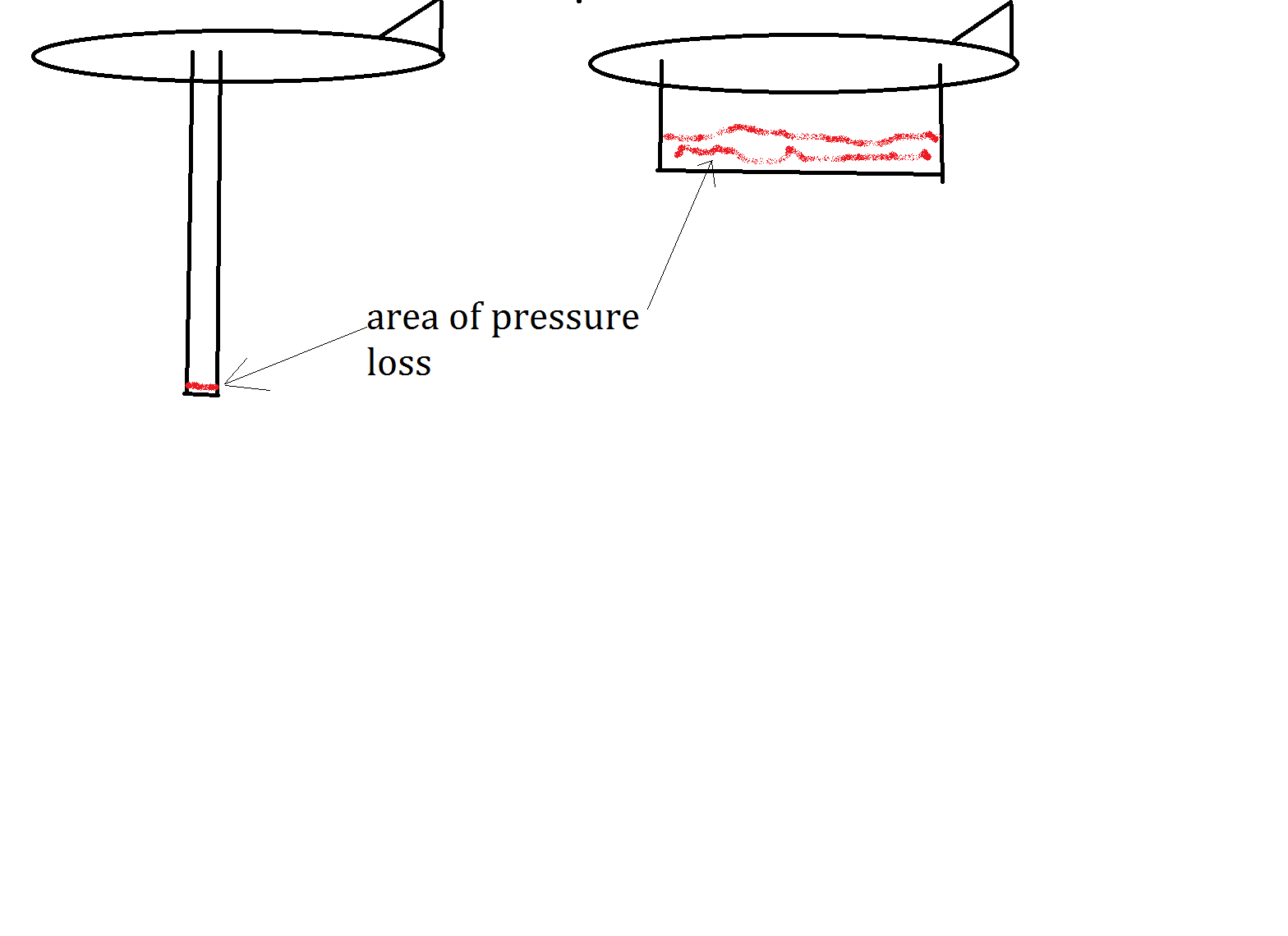 Vortices are just a manifestation of energy "leakage" in the process of inducing a package of air to move down. Some of the air, instead of being induced to move down, escapes around the wing tip, and it extends well beyond the core right at the tip were the strong vortice is; there's a large flow field circulating around. It's like a snow plow where snow near the ends of the plow is able to escape around the ends and avoids being pushed forward.

A higher aspect ratio wing is moving a longer and skinnier package of air compared to a low aspect ratio one of the same area that is moving the same total mass of air. This means that the escape route around the tip is a smaller proportion of the total mass affected, so the overall losses, the amount of leakage, is a smaller part of the overall package of air being induced to move down.

If both the high aspect wing and low aspect wing have the same area, meaning they are both attempting to redirect more or less the same total mass of air, the high aspect one with the lower losses from tip leakage*, relative to the total package of air affected,* is able to get more work from the same package of air. If it's getting more work out of the same package of air, it can operate at a slightly lower angle of attack for the same net lift force generated, and needs less total energy to generate that lift force, and therefore has less induced drag.

Your understanding of induced drag is correct. It is caused by turning the air flow and the force that does it must be tilted, otherwise conservation of energy would be violated.

The stream ‘tube’ affected by the wing is obviously as wide as the wing, and always considered to be roughly as high as wide. That is, wings with higher span affect air to greater height above and below them and therefore much more of it. This matches the fact that, for given lift, induced drag is inversely proportional to the square of span.

An intuitive, approximate, explanation is that the air below the middle can't escape directly to the sides and must go further down the wider the high-pressure region is, and similarly above the wing the air from sides is already used up for filling above the wing tips, so air from higher up is needed to fill in in the middle.

Or in other words, the affected region is approximately circular, because the pressure is being equalized in all directions.

The lower aspect ratio wing has to fly at higher angle of attack to compensate. I think, but am not completely sure, that it can do that because the longer chord allows turning the air more gradually—with the same lift and the same area, the pressure drop is the same (pressure being force per area), but it acts longer on the stream—so it can be turned by higher total angle before the flow separates. But it is to an extent only—both ${C_L}_{max}$ and ${C_L}_\alpha$ depend on the chord length and the lower aspect ratio wing will produce less lift.

Starting with the simplest example, a fully symmetrical airfoil, aspect ratio (of a straight wing) can be described as the ratio of area to chord, or area to span, or ...

Why is this important?

Because the total lift vector here is pointing forwards, creating a thrust component!

lowers the overall induced drag of the wing.

That, and proportionally lower interferences at the wing tip and fuselage make high aspect wings more efficient for gliding.

For very slow soaring birds, such as vultures and eagles, the low aspect wing is actually better to catch the energy of updrafts. In much the same way as a circular parachute is better than a long thin one, this type of wing cannot take advantage of very low net drag contribution of upper forward wing lift because it is too slow (Reynolds number too low to generate it) and there is greater pressure "leakage" from the bottom due to the higher perimeter to area ratio of the higher aspect design.

But in size and speed from the albatross to full scale gliders, high aspect ratio is the way to go for best glide distance.

This leads to the conclusion that "top lift" mechanism (Coanda/Bernoulli) generates less induced drag than simple Newtonian action/reaction deflection of air from the bottom of the wing for a given amount of lift.

47
Why does supersonic flight detach airflow from a wing?
21
What dictates the aspect ratio of an aircraft's wing?
15
What is the propeller efficiency, $μ_p$, of modern propellers for light sport aircraft?
12
How is the induced drag calculated for a wing with elliptical planform?
5
Is the induced drag independent of wing span?
6
What is the angle of attack of horizontal stabilizer?
1
How does aspect ratio affect the stalling angle of the wing?
0
Induced drag - where does it actually arise from?
1
For subsonic aircraft, would adopting a higher wing loading decrease drag?
1
Why do most authors use wingtips vortices as reason for 3D flow around wing?
See more linked questions