If an elliptically-shaped aerofoil gives the optimum lift distribution, why aren't propeller blades designed around this ideal?

So given an elliptical lift distribution is the most efficient, why are propellers not designed around this? Props aren't affected by the adverse stall characteristics that concern a "main", elliptically-shaped wing, given they (theoretically) should never stall.

The picture of a C208 propeller below illustrates what I mean; the propeller is raked at the tips. Is this related to encouraging a spanwise flow due to the tips approaching Mach 1? I would have thought stubby propeller blades like those wouldn't reach speeds where wave drag becomes an issue? 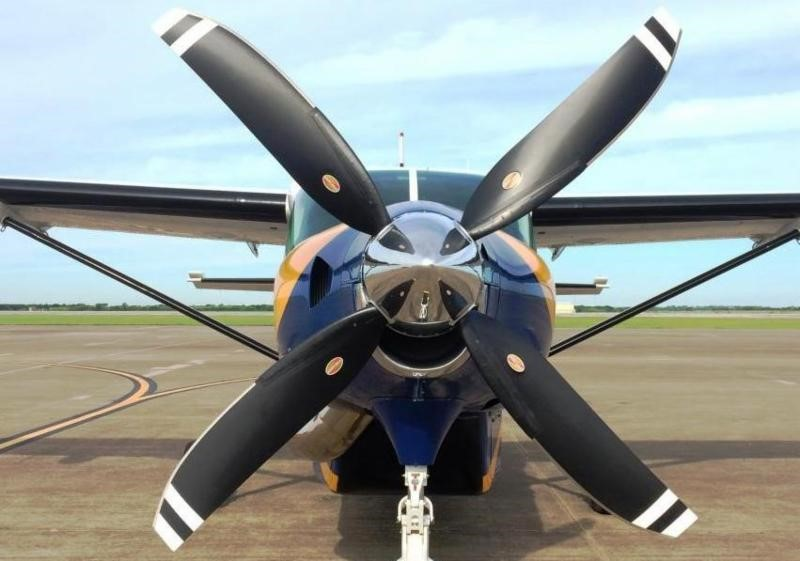 I suppose this P-51 propeller is closer to that ideal shape but it is still relatively square at the edges. I understand that you couldn't strap a perfectly elliptical wing to a propeller given the high aspect ratio needed of the blades, but nevertheless, I don't understand why propellers are not at least approximated to the ideal shape... 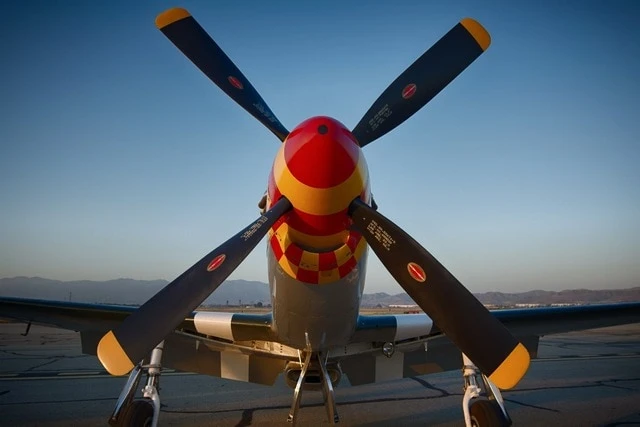 If an elliptically-shaped aerofoil gives the optimum lift distribution …

I interpret this as an elliptically shaped wing, because only then the question makes sense.

Propellers are similar, but not identical to wings.

What is required is not an elliptic lift distribution, but minimum induced losses. Albert Betz showed in 1919 that the optimum induced speed is constant over the propeller disk, just like downwash is ideally constant over span for minimum induced losses. Based on this, Larrabee found an efficient computation method and practical propellers have to find a compromise between theory and practical constraints. The most important are

Betz' theory is meant for lightly loaded props. Once disk loading goes up and the propeller diameter cannot grow proportionally, propeller chord and blade count grows and the main concern shifts to converting all available power to thrust. Concerning fancy blade shapes: They have more to do with marketing or unscientific voodoo beliefs by some hobbyists. Generally, a straight shape works best, unless you desperately try to reduce compressibility losses by sweeping back the tips.

Eliptical lift distribution is not ideal if wingspan is not limited..

Why is “a given span” the ultimate goal? We believe this is misdirection, it is a bad requirement. What happens if we use a different definition as a constraint. Instead let’s use structural weight. What does that result teach us?

Prandtl writes another paper [Ludwig Prandtl, Uber tragflugel kleinsten induzierten widerstandes, 1933]. Prandtl removes the elliptical load, uses the same structure with a different lift profile and lower drag. This is 11% more efficient, the load tapers to zero at the tip, and the wing exhibits thrust at the tip instead of drag. Why is all of this of any interest?

Using the new tapered load on a wing, the lift vector is rotated across the wing. This rotation of the lift vector comes from a distorted flow field, and this distortion allows the aircraft designer to eliminate the tail completely. The adverse yaw is eliminated. Tails constitute about 30% of total aircraft drag. This is very different to the traditional approach.

Additionally, the same rethinking of the wing can be applied to propulsion systems (no more “minimum induced loss”). We believe this results in a gain of 15.4% thrust for the same input torque/power.

This does not answer your question however I feel the need to correct an assumption you've made.

The body of your question is correct:

So given an elliptical lift distribution is the most efficient

However, the title of your question is wrong:

There are three ways you can vary lift:

You seem to assume that a lift distribution that results in an elliptical graph when plotted on paper/computer screen implies that the flying surface needs to vary its chord so that it forms an elliptical shape. Doing this you have forgotten the first two ways that lift can be altered.

Yes, in the old days before computers and parametric CAD software it was really difficult to manually calculate how to vary the wing's angle of attack (twist) or airfoil to get an elliptical lift distribution. Therefore aircraft designers did the simplest thing: made the wing shape elliptical.

If you look at modern high performance aircraft such as airliners you will see that physically their wings don't look elliptical. However, since fuel consumption is an important factor for airlines, manufacturers still design the wings to have an elliptical lift distribution. Only these days it's done by varying the wing's twist (washout) and can be calculated automatically by CAD.

So even a straight rectangular wing can have an elliptical lift distribution.

35
How does a fan differ from a propeller?
20
Why are there so many different propeller shapes?
2
Is there a mathematical formula to find the most efficient propeller?
0
Would large, low aspect ratio fan/propeller blades be more efficient? Why not?

27
Is there any equation to bind velocity, thrust and power?
21
Why don't helicopter blades look like other propellers?
17
Why are there different number of propeller blades on the inboard and outboard engines?
8
Why divide the blades of a 9 blade propeller into 3 groups?
1
What methods are used to calculate the geometry needed to obtain a bell-shaped lift distribution?