How do wing tip vortices that interact with the wing surface affect drag?

I am interested how wing tip vortices which interact with the surface of the wing affect drag and does it make sense to reduce the area of wing tip, because of them? 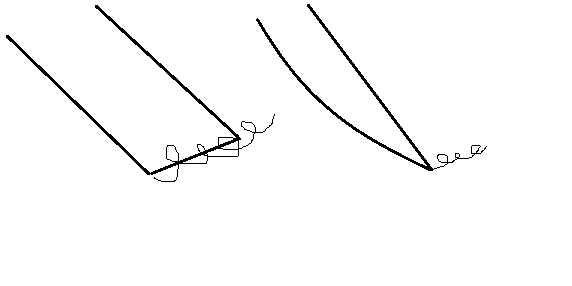 MEng Aeronautics and Astronautics student at Southampton uni here. We've been studying this in some detail recently and I've found that MIT has released a set of lecture notes on finite wing theory, including a really useful document focussing on tip vortices and their impact on aerodynamic performance (http://web.mit.edu/16.unified/www/SPRING/fluids/Spring2008/LectureNotes/f05.pdf). This explains the induced drag acting on a wing/other lifting surface which is caused by tip vortices generating downwash, which in turn alters the wing's geometric angle of attack. Hope this helps, or at least gives you a starting point for further research :)

What we commonly call wingtip vortex is technically not a vortex in the strict sense. The spiraling circulating air around the wing tip that trails behind the wing is actually the product of two processes:

The graph below (Ref Drela, Flight Vehicle Aerodynamics) illustrates the trailing flow field around the wingtip. As you can see, there are two cores of circulating flow centered around each wingtip, exactly as we would see from flow visualization.

From the drag perspective, the above analysis is completely identical to the lifting line analysis for a high aspect ratio wing: the induced drag is the only drag you're going to get out of it.

In the preceding discussion, we've been assuming that the trailing vortices trail inline with the far field velocity; i.e. we have a rectangular trailing vortex sheet. But that's not completely accurate. From flow visualization, we can see the wingtip "vortices" trailing up and away from plane.

This can be understood by the roll-up of the vortex sheet itself, as it interacts with not only the flow field, but also neighbouring vortices. This is illustrated below (Ref. Drela, Flight Vehicle Aerodynamics).

For a high aspect ratio wing, the effect of the roll-up is negligible and we need hardly concern ourselves with it when estimating lift and drag. The roll-up becomes a lot more important for low aspect ratio wings, such as a delta wing, as illustrated below (Ref. Anderson, Fundamentals of Aerodynamics): 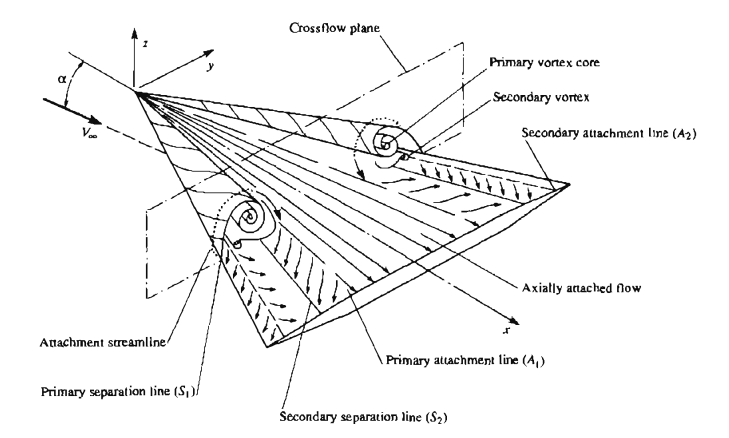 2
What are differences between vortex, swirl, eddies and wake?
1
What is the role of a bound vortex?

1
How can I calculate effective wingspan of a high aspect ratio model airplane?
1
How can wingtip vortices affect the direction of the relative wind in front of the leading edge?
7
Is induced drag caused because of the tilt of the wing backwards?
10
Why do wall-to-wall airfoils in wind tunnels produce no (or infinitesimal) downwash?
6
How does the wraparound wing design reduce drag?
3
Does a rotating control surface change the wing area?
1
How does wing aspect ratio influence lift and drag?
2
Would a triplane be way more efficient if the wings intersected at the tips to create one wing tip vortex instead of 3?