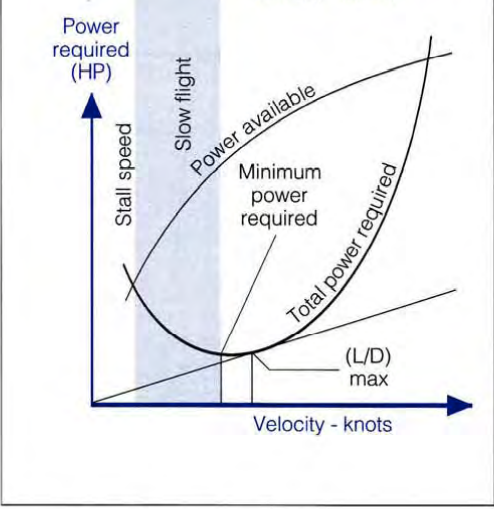 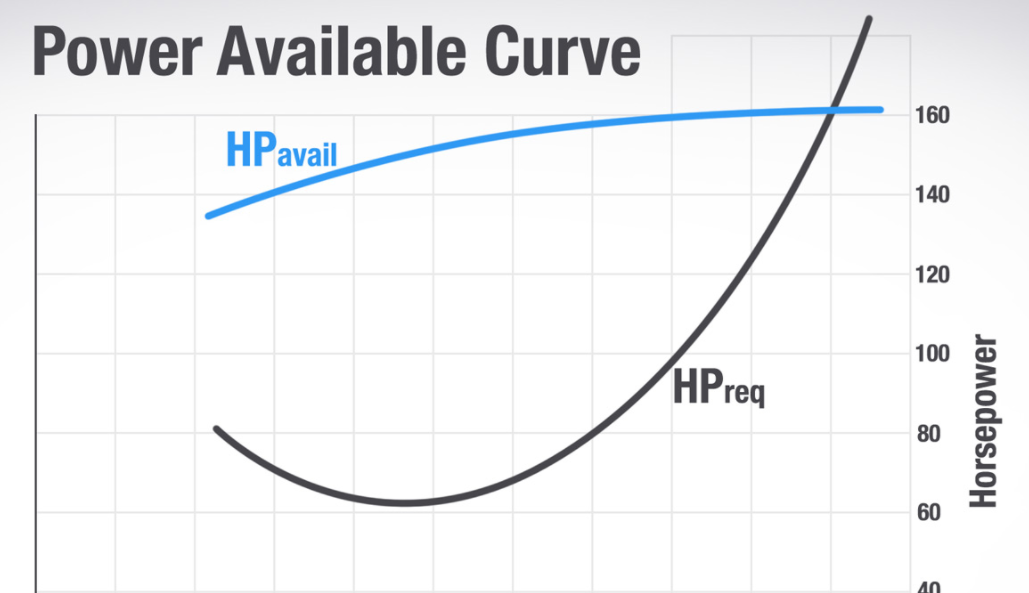 Trying to understand the drag and power required/available graphs for a piston + propeller airplane. Both graphs are from current book/website and while they are showing mostly the same thing, I noticed the shape of the power available curves are different.

If I have to guess I think the second graph make more sense, since power available from a piston engine should be almost the same throughout the entire speed range.

*If the above is true, can you please also explain why it's not a perfect horizontal line across? Ie: if the engine is rated for 150 BHP, then the line should be at 150 BHP, other things equal (density altitude)

I feel like I'm missing something fundamental here but can't seem to work this out. Thanks

Power is work getting done over a period of time. Work is force multiplied by distance. So when you are sitting at the beginning of the runway, at full throttle and brakes on, while thrust available is very high, power available is 0, because no “work” is getting done.

Edit- basically you are applying a lot of force, or using a lot of thrust, but since distance traveled is 0, no work was actually done. Which is why the power available is indeed 0 at a velocity of 0, and increasing rapidly.

Note- the second graph is exactly the same as the first, only it is showing the curve beginning at some point after the stall speed.

Whether or not the graphs are identical certainly would be up to the artists eye, but working through the units and definitions may be helpful.

Most of us know "power" as engine output in "horsepower" but it can also define the energy state of an object that is propelling itself as Power = Force x Velocity with units of kg m/s$^2$ x m/s. The propelling force is Thrust.

They both are if we understand them. The first one is based on Thrust x Velocity of the aircraft. Factor out Velocity and you have a perfectly sensible graph with L/D max right at the bottom of the curve.

The second one shows "horsepower available" based on engine RPM, which improves slightly for fixed pitch props that reach optimal AOA and less blade interference at higher airspeeds. Essentially, the prop allows the engine to run at a higher RPM because it is creating less drag.

"Horsepower required" is how much engine torque is required to turn the prop at a sufficient velocity to create sufficient thrust to match the aircraft drag.

Why they don't just plot thrust vs drag is beyond me, but working through the units and nomenclature seems to help.

8
Why would a Su-25, which has more power and is much lighter than an A-10, only fly half as high?
17
Why is max endurance different for jet and props?
1
Is there a difference in aerodynamic efficiency between single engine and twin engine airplanes?
6
Under which conditions is full rated power instead of METO power required for takeoff (DC-3/C-47 with Pratt&Whitney 1830 twin wasp engines)?
4
Why is a weight and balance graph lozenge-shaped?
12
How (and why) does engine thrust change with airspeed?
2
Which one is more effective produce power of this two turbine's location?
1
Why isn't Vy lower than the speeds for best L/D ratio and best glide ratio in an airplane with a piston engine and a variable-speed prop?
3
Can briefly explain the principle behind the inversion on this power required curve?
1
How do power and thrust curves compare?