Is this glider stable?

In level flight all forces must be in balance,that mean center of overall pressure(lift) is in line with C.G. 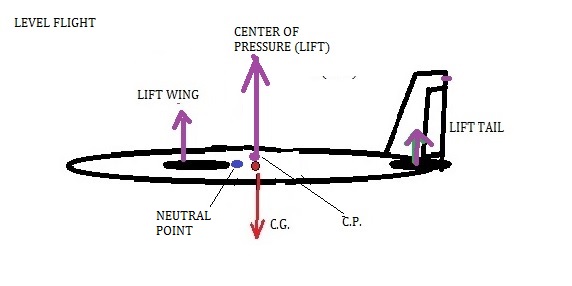 Disturbance comes in such way that shift C.P. back. 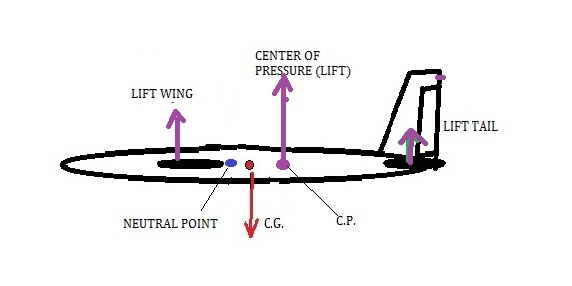 Is this glider stable?

If I use aircraft stability definition,glider is not stable ,because neutral point is in front of C.G.

(for me glider is stable,because lift in reality act in CP,so lift make counter clock wise torque about C.G., this plane will put nose down.better to consider pitch moments for every AoA with corresponding position of center of pressure..)

I dont understand why proffesor draw lift at A.C., if lift act at C.P. ?

Disturbance comes in such way that shift C.P. back.

But which way is that disturbance? Is it increase or decrease in angle of attack?

Remember the definition of neutral point: the pitching moment around it does not change with angle of attack. So if the C.P. shifts back further from the N.P, the total lift mus decrease so its product with the longer arm remains the same.

Decreasing lift means the disturbance was decrease in angle of attack.

And what moment around C.G. did the disturbance create?

C.G. is now ahead of C.P., so the resulting pitching moment is nose down. And nose down moment decreases angle of attack.

You're starting out from a fairly mistaken idea of how things normally work. In particular, you're showing the horizontal stabilizer lifting upwards.

At least in most normal designs, the horizontal stabilizer does not lift upward at all. In fact, it's normally flying at a negative angle of attack, so its "lift" is actually pushing downward on the tail.

We normally start by looking at the center of lift (CP) of the wing by itself. That'll typically be somewhere around 40-45% of mean aerodynamic chord (MAC).

The CG is at least somewhat forward of that (25% of MAC is a pretty common starting point).

This is what gives static stability. If you stall the wing, it will lose lift. As the wing loses lift, the CG being so far forward will cause the aircraft to pitch nose down. That, in turn, will (at least normally) reduce the wing's angle of attack, so it will recover from the stall.

If the CG were arranged where you've shown it, behind the CP, you wouldn't get that automatic stall recovery--if the wing or (especially) the horizontal stabilizer stalled, the CG would be far enough back that the aircraft would tend to pitch nose up, increasing the angle of attack, stalling the airfoil even more deeply (a "deep stall", which is usually unrecoverable).

Although it's fairly unusual, you could do a design where you kept the CG somewhat behind the CP, but loaded the wing more heavily than the horizontal stabilizer. In this case, both the wing and the stabilizer would be lifting upwards, but since the wing is more heavily loaded, at higher angles of attack, the wing would stall before the stabilizer, and when that happened, the nose would drop.

To achieve the front wing being more heavily loaded than the rear, you typically end up having to shrink the front wing, and (to maintain overall lift) expand the rear wing. And that gives a canard design, such as the Rutan Vari-EZ and Long-EZ, and the Quickie Q2. Thanks to their use of canards, the Rutan designs are extremely stall resistant. The Quickie claimed to be completely stall proof (and as far as I know, that was accurate).

EBV821, you seem to be very determined to learn a lot quickly, so I hope this helps:

Aircraft are unique in that they are really doing 2 things at once: holding themselves up and moving through the airmass.

The $nuetral$ $point$ is simply the dividing line between directional stability and directional instability.

So, alas, you gliders are directionally unstable, therefor they cannot be staticly stable.

Notice if you increase the size of the tail, you can move the net aerodynamic center back. Or, you can simply move the weight forward.

Center of lift is balanced with tail trim, Directional stability is dependent on placing CG ahead of the Net (wing AND tail) AC (neutral point).

In your case (second diagram), CP moves back, glider pitches down, and continues to pitch down even if disturbance is removed.