What pattern of position lights did early Soviet jetliners use?

All aircraft that operate at night or in poor weather need position lights to make them visible to other aircraft for the purpose of avoiding mid-air collisions. On most aircraft, these follow a set pattern: two continuously-illuminated lights on the wingtips (red on the left wingtip, green on the right [a pattern inherited from marine navigation lights], to allow other aircraft to see whether yours is flying towards or away from them), a continuously-illuminated white light in the tail, and high-intensity white anticollision strobe lights on each wingtip, in the tail, and on the upper and lower surfaces of the fuselage.

However, according to the Wikipedia article on the Ilyushin Il-62, early Soviet jetliners did not follow the standard arrangement for position lighting:

The Il-62 entered Aeroflot civilian service on 15 September 1967 with an inaugural passenger flight from Moscow to Montreal, and remained the standard long-range airliner for the Soviet Union (and later, Russia) for several decades. It was the first Soviet pressurised aircraft with non-circular cross-section fuselage and ergonomic passenger doors, and the first Soviet jet with six-abreast seating (the turboprop Tu-114 shared this arrangement) and international-standard position lights. [Emphasis added.]

What arrangement of position lighting did pre-Il-62 Soviet jetliners use?

That was a tough one. The USSR joined ICAO in 1970.[a] The colors and positions would have been the same, since those carried over from maritime conventions.

What isn't the same, based on checking warbirds, is the viewing angle. The red/green lights in ICAO/Western standards are not viewable from behind, but Soviet aircraft did not have that distinction. They also had separate top/bottom navigation lights, even the license-built DC-3 (Li-2) was modified to have that top/bottom arrangement.[1]

Judging by the Yak-40 (an early Soviet jetliner), they lacked the white wingtip lights[b] that are viewable from behind -- compare with the ICAO-compliant Il-62 (shown on the right):

For the aforementioned warbirds, below shows an American F4F (annotated) and a Soviet Il-2: 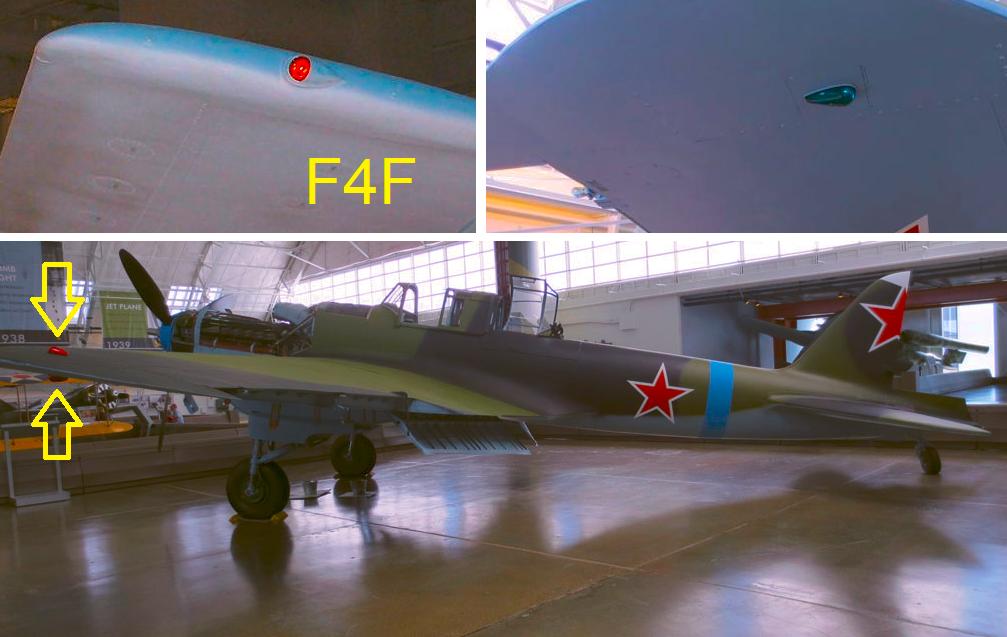 a: I'm not sure whether Soviet transport aircraft that flew internationally and were built prior would have been retrofitted

b: technically those are anti-collision lights, but unfortunately the Wikipedia statement is vague and lacking in-line citation -- the ICAO-equivalent became effective in 1962 according to SARPs Annex 6 part 1

Not the answer you're looking for? Browse other questions tagged aviation-history aircraft-lighting soviet-union or ask your own question.

24
Placement of positioning lights on A320 winglets

45
When to use beacon, anti-collision, strobe, logo, and navigation lights?
20
How did aircraft communicate during early air travel?
41
Do lights on aircraft flash in a specific pattern?
9
Why did the early versions of the Me-109 use a braced stabilizer?
13
Why didn't early jetliners use turbofans?
7
What uses for flight did early aviation pioneers envision?
20
What means of navigation did commercial Soviet airplanes use in the 50s-90s?
12
Do aircraft use their lights to 'say hello' to each other?
3
Does/did Russia or the Soviet Union ever fly rocket planes?