Do black wings have better aerodynamics?

This news article links to a 2019 academic study: Thermal impacts of wing coloration on surface temperature during bird flight.

Do black color or hotter surfaces improve the aerodynamics of wings?

A key consideration might be airspeed: fast air over a plane wing doesn't allow time to heat up the boundary layer so much. Birds and sailing boats operate at much slower airspeed so maybe those get some benefits?

Heating the boundary layer has been shown to decrease drag:

Unfortunately the research paper is not freely available, but the abstract reads as follows:

A new technique for reducing the drag of existing aircraft configurations was investigated. Heating the surface under a turbulent boundary layer reduces the turbulent skin friction. An experimental program was conducted to determine the feasibility of applying this technology to military and commercial aircraft. Three different experimental investigations were conducted to measure the extent of the drag reduction. The first experiment was a low speed wind tunnel test. Very significant drag reduction was measured while only heating the forward portion of the wind tunnel model. In order to determine the effects of higher Mach and Reynolds number, a flight test program was conducted using the NASA Dryden F-15B Flight Test Fixture. The [second higher mach] experiment measured the skin friction over a flat plate using a momentum deficit technique. The magnitude of the drag reduction was less than measured in the wind tunnel, but showed a trend of increasing effectiveness with decreasing Reynolds number. The third experiment confirmed the overall drag reduction on a business jet class aircraft. This work has shown that significant drag savings can be achieved using boundary layer heating.

As to why this method is not (yet, at least) utilized, might be because of the adverse effects of heat on structural integrity and / or longevity of airframe; added fuel consumption if heating is active, negating fuel savings; added systems complexity if active system is used; and possible negative effects on other aerodynamic properties of planes, such as controllability (I personally doubt this, but it is possible).

Note that he research is "only" about 20 years of age, so things might change.

For the bird analogy, you're thinking about this wrong. Birds have dark upper wings for camouflage, not for aerodynamics. A predator above them is less likely to see a dark top against a darkish background (the ground). This is the same reason that many birds have lighter colors under their wings - that looks a bit more like the sky.

This has actually been tested, but results were not particularly positive.

During the Vietnam era, B-52s were painted with an "SEA" (South East Asia) camouflage scheme, which was black on the bottom, and fairly light green/brown colors on top: 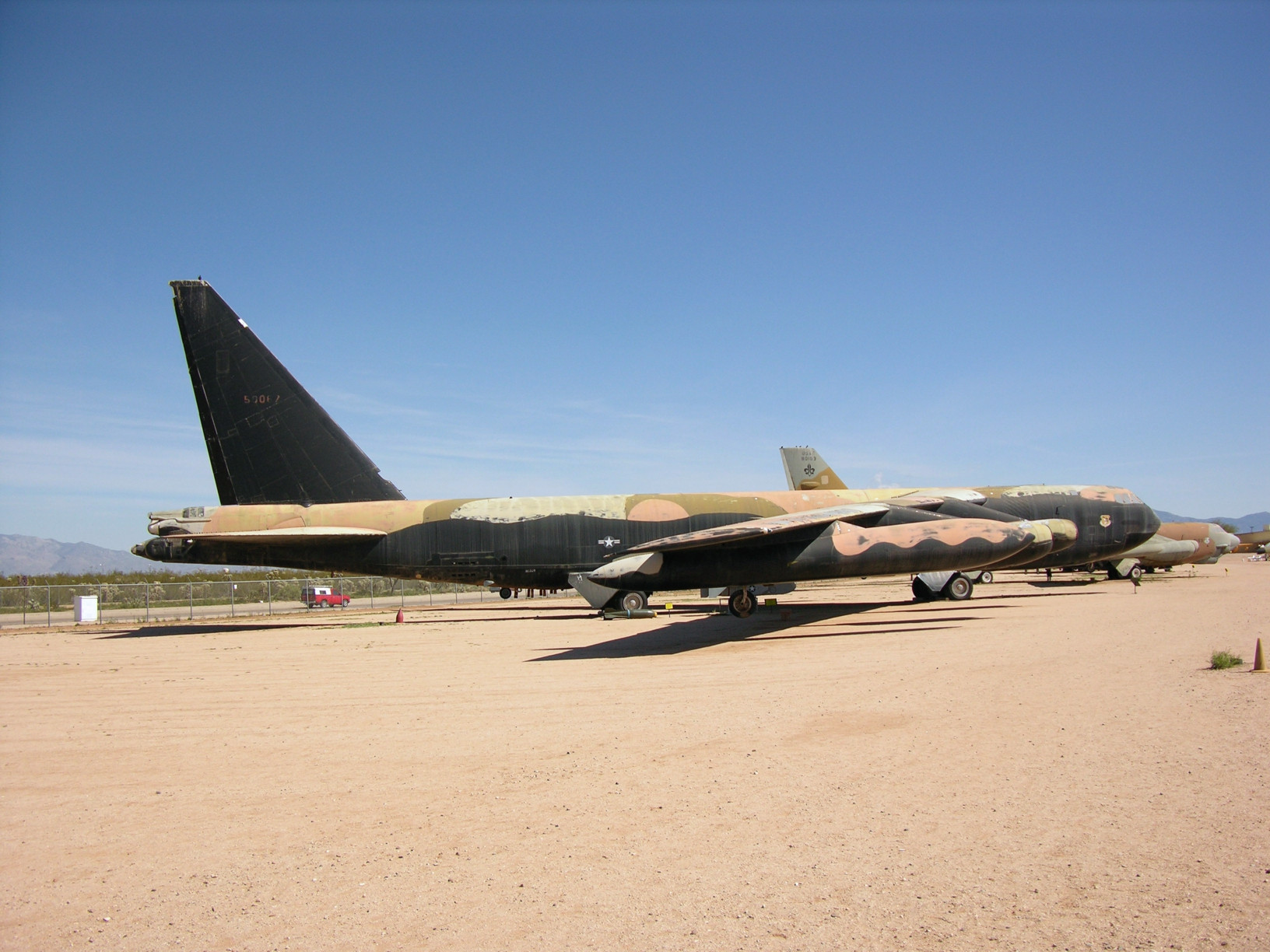 During the cold war, the SEA camouflage scheme was replaced with the SIOP (Strategic Interdiction Operations Plan). The SIOP camouflage scheme for the B-52 had the bottom of the aircraft painted glossy white, and the top side in darker, flat colors (not black, but fairly dark greens and browns). 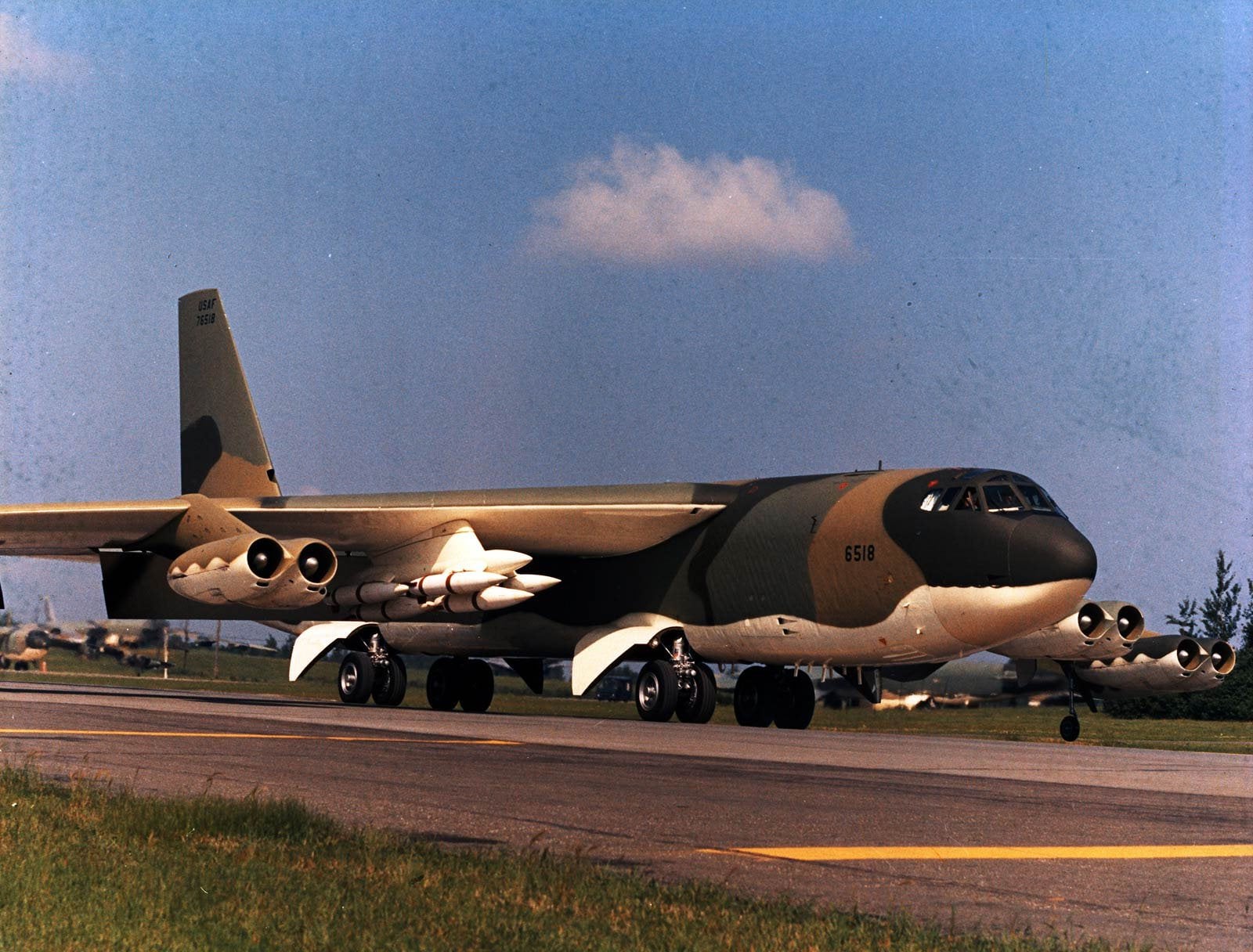 This picture looks pretty faded to me though--in real life, the top side was rather darker than shown here.

Around the mid-to-late 1980s, the SIOP camouflage scheme was replaced with the "new strategic" camouflage scheme, which was lighter grey, with minimal contrast between top and bottom (sorry, I haven't been able to chase down a picture of this one).

I never heard even the slightest suggestion that there might be even a slight difference in fuel usage depending on the camouflage scheme in use. It certainly wasn't mentioned in the documentation ("technical orders") and I never heard a pilot or navigator say anything even hinting at such a possibility either.

At least as I see things, the basic problem here is pretty simple. During a typical flight, you have an air speed in the range of hundreds of miles per hour, and you're typically flying in air that's at -40 degrees (or colder), so it's next to impossible for the light falling on the aircraft to heat it up to any noticeable degree at all.

In the specific case of a B-52 (or other strategic bomber) you do have the possibility of flying at terrain avoidance level (low altitude, so the air isn't nearly as cold), and you might be flying at somewhat lower speed, but your air speed is still going to be in the range of hundreds of miles per hour so you still have almost no possibility for light falling on the plane to raise its temperature to any significant degree. In any case, most aircraft don't fly at terrain avoidance level anyway.

We don't yet know. The study Thermal impacts of wing coloration on surface temperature during bird flight that the question points to made a few guesses about aerodynamics, but the only thing that it measured was how color affects the temperature of a wing in flight:

In white wings with black tips, the temperature differential produced convective currents towards the darker wing tips that could lead to an increase in lift. Additionally, a temperature differential between wing-spanning warm muscles and colder flight feathers could delay the flow separation above the wing, increasing flight efficiency.
...
Future studies should directly explore to what extent wing coloration affects lift and drag when exposed to solar radiation.

In both natural and artificial flight (birds, airplanes), wing color is more about camouflage than anything else. Dark upper surfaces and light lower surfaces usually make the bird (or plane) harder to see against the background. Countershading is common in many birds and warplanes for this reason. If there was a demonstrable efficiency advantage to dark upper wing surfaces, we'd already see them as a commonplace thing on commercial aircraft where even small improvements matter. There are two drawbacks to painting the top surface of an aircraft wing dark:

Warplanes are painted because the need for camouflage is a greater concern than the weight penalty or thermal considerations.

As a data point, I would mention that gliders, the most efficient aircraft out there, have been regularly painted white for decades. Though the main reason for doing this is protection from the sun, I'm not aware of any case (in over 5 decades of fiberglass/carbon gliders) where darker wings were used, not even for a single competition or a single record flight. 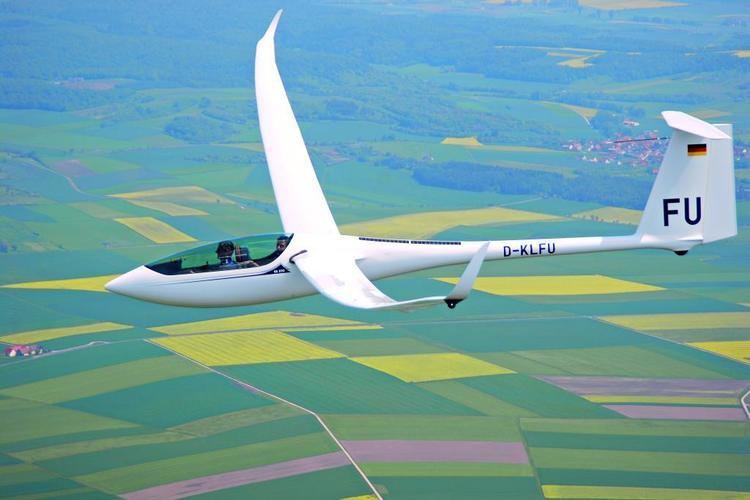 16
Why are swept wings better for breaking the sound barrier?
26
Why does a missile have small wings but better agility than a plane?
7
Is there a source of information on the Aerodynamics of Non Rotating Round Disc Wings?
3
why do wings have high aspect ratios on commercial airliners?
1
Would the Wright Flyer have flown better with thicker airfoils?
2
Aerodynamics moment of a wing