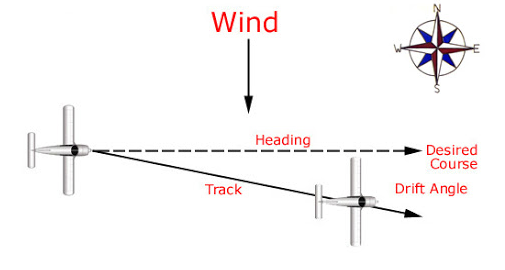 Initially aircraft is moving along dotted line. But due to wind, aircraft ground track is changed to solid line but body still pointing parallel to dotted line. I've the following questions:

(1) What is sideslip angle in this case?

(2) What is direction of relative wind?

The answer to the title question is no, sideslip angle and drift angle are not the same thing. (in this figure, or any other...)

What the diagram shows is drift angle, and drift angle only. If you are moving through a uniform airmass that is itself moving relative to the ground, your path across the ground (ground track, or course) will be affected by the movement of the air. The difference between your heading (simply the direction the aircraft is pointing) and your actual ground track is the drift angle. That is the teaching point, and purpose of this figure.

Regarding the numbered questions:

There are different and better illustrations that show sideslip angle if you need more help understanding what it is.

The relative wind (as felt by an imaginary weather vane on the aircraft) is coming from straight ahead. The side slip angle is thus 0.

First, the word "Track" implies the earth frame of reference. but the word Heading implies only the orientation of the aircraft. But let's assume Track can be measured in either frame...

In the Atmosphere, aircraft Heading is 090 Due East, Track (within the atmosphere), is also 090 (due East), Sideslip (difference between Fuselage reference line and relative wind), is Zero. airspeed will not change (100 knots). "Course" is meaningless as it is a concept relative to the earth frame of reference, not the atmosphere. It is actually somewhat the same as "Track".

By the way, in reality, if you actually did this (Take off on a runway aligned due East with a left cross wind), what would happen is this: First of all, to keep the aircraft tracking straight down runway centerline, prior to liftoff, you would need to add DOWNWIND (right) rudder to counteract the wind-milling effect of the crosswind on the vertical stabilizer. Without it the aircraft would turn upwind - into the wind. You would also need to add upwind (left) aileron to keep the upwind wing from rising and to prevent the roll away from the wing that the rudder would otherwise cause. As the aircraft lifted off (as the wheels lost contact with the runway), if you kept those cross-controls applied, the aircraft would be flying on a due easterly ground track, in a sideslip, Tracking straight down extended runway centerline, with a true airspeed velocity vector upwind (slightly north) of the runway centerline (about 085-090 degrees). (i.e., it's velocity vector IN THE MOVING ATMOSPHERE Frame). It would be moving slightly north of east through the atmosphere, as the atmosphere is moving south at the same rate, vectorially cancelling each other out to produce a ground track aligned with the runway (due east).

If at this point you neutralize the controls, what will happen is that aircraft will rapidly weathervane into crosswind, removing all sideslip. It will now be point "upwind" (080-085?), but will still be tracking due east along extended runway centerline.

Physics cannot be ignored, nothing (including aircraft) can change it's velocity without a force acting on it. An aircraft flying in a the air does not feel ANY force from "Wind". "Wind" is just the mathematical representation of the motion (velocity) of the entire atmosphere relative to the motion (velocity) of the earth (or the aircraft carrier, or the car you're riding in, or the train you're on, etc. etc. The only force an aircraft feels is from the "relative" wind, the motion of the air across the aircraft skin due to it's motion THROUGH THE AIR, not across the ground. (and the thrust of the engines and it's weight).

Since we all seem to be going "enhanced response" on this answer, let's start by interpreting the picture in the question: an aircraft attempting to fly 090 but is being blown off course.

If the pilot wanted to fly 090, then the heading would be 081.5 to correct for the crosswind.

One can see that correcting for a 90 degree cross wind does indeed slow groundspeed slightly.

Disclaimer: since flying crosswise to the external, meteorological wind creates no inherent tendency for an aircraft to sideslip, as far as practical piloting is concerned we normally assume sideslip is zero in wind correction problems, in which case we could assume that the arrow labeled "desired course" is also the "airspeed" vector, simply because it is aligned with the aircraft heading. Therefore answering the particular questions asked here, in terms of the particular "givens" presented here (which do not seem to include an assumption of zero sideslip), is a purely theoretical exercise, with no real practical value.

This answer assumes that the all the arrows in the figure are intended to represent velocity vectors, whose length accurately corresponds to the speed (magnitude) of each of the three variables involved.1

This is a crucial piece of information. It tells us that the "desired course" arrow represents not only the direction that the pilot wishes to track over the ground, but also the direction and speed that the aircraft is actually moving relative to the airmass.

In other words, the "desired course" arrow is also the "airspeed" vector.4

Therefore we can see that sideslip is zero-- the aircraft is exactly aligned with the flight path through the airmass.

No, the sideslip angle is zero, and the drift angle is not zero.

3
In a non-symmetric turn, how do the side slip angle and thrust side slip angle affect the equations of motion?
2
Is there a specific relation between sideslip angle and yaw rate OR how sideslip angle depend on yaw rate?
4
How can using split throttles help when landing twins in crosswinds?
2
Sideslip vs Freestream Azimuth Angle
1
At what angle-of-attack (sideslip angle) would a symmetric vertical fin plus a deflected rudder have a lift coefficient of exactly zero?
1
How does sideslip indicator react during crosswind?
1
Why would larger aircraft have higher crosswind takeoff and landing limits than smaller aircraft?
4
How are coefficients of equation of sideslip angle in the paper "A general Solution to the Aircraft Trim Problem" calculated?
5
Calculate/Measure Sideslip Angle from Heading Track and Drift Angle