What is the maximum momentary G force that a modern airliner's wing can take before it snaps in extreme turbulence?

Taken from an aviation safety pdf..

The limit turbulence load (the worst theoretical turbulence the plane would encounter) for modern jets is 90-100 feet per second, or around 6,000 feet per minute. (FAR Continuous turbulence criteria):

There is a 50% safety margin, so the max turbulence it will encounter before a wing snaps off is about 150 fps.

What (momentary!) G loads would an airliner experience if it was cruising and suddenly encountered a patch of 100 fps intensity turbulence? (The ''worst case'' turbulence?)

It's hard to give a direct answer to your question. But I will try to give a realistic answer.

As stated in the "Easy access rules for large aeroplane CS25" under EASA regulation:

That's the normal range of load factors for a modern airline; of course an aircraft can be design to withstand more positive or negative G's, but most of them have an upper limit of +2.5g and -1.0g (in clean configuration), as stated in the regulation.

The following fundamental requirements have been developed around the experiences of metallic airframes and remain the basis for the certification of composite airframe structures. These require that the structure (by test and/or analysis) demonstrate the following capabilities:

• Static strength: – Design limit load (DLL), no failure or unacceptable deformations. DLL is normally the maximum load anticipated to be placed on the structure in its lifetime. – Design ultimate load (DUL), no failure, although limited permanent deformation is acceptable; DUL = DLL × 1.5 (generally).

The limit of +2.5g and -1.0g will be our DDL, so if we "remove" the safety factor (1,5, but can be higher) the Max G load will be +3,75g and -1.5g. if you fly at this load factor the aircraft will not broke apart or will have catastrophic failures, but deformation can occur.

Let's talk about turbulence: Extreme turbulence in reality is not part of the categorization of levels of turbulence (At least in EASA rules), the upper limit is the severe turbulence:

Turbulence that causes large, abrupt changes in altitude and/or attitude. Aircraft may be momentarily out of control. IAS fluctuates more than 25KT. (>1.0g at the aircraft’s centre of gravity)

As you can see, we still below DUL limit. I can tell you that probably the aircraft will not have any deformation in that range also if above DDL, this is because we are talking of instantaneous accelerations and not continuous and constant load factors (DUL and DLL are based on that).

The aircraft will however be checked after the encounter of severe turbulence.

Reassuming, is very hard that turbulence will cause any significant or severe damage to a modern aircraft. (Severe or Extreme)

But to give an answer to your question I can give you an example:

China Airlines flight 006 experienced vertical load factors of up to 5.1 g on 19 February 1985. The aircraft landed safely and there were no fatalities, but there was some damage: 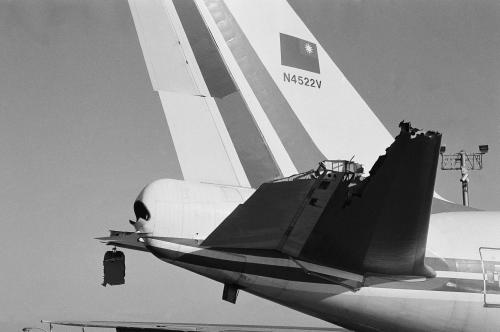 5.1Gs was probably the top of the load, but during the recover they were above DLL and DUL for a while. This however didn't cause a catastrophic failure of the wing section.

I don't have any document or personal information or experience about the instantaneous or the continuous g Load to cause the snap of the wings, but I think that we are talking of +7/8g -4 continuous and +10-11g -5-6g instantaneous.

I hope that I answered your question.

The maximum load required for certification has to be maintained for three seconds if the test is successfully passed. You ask about momentary loads which is a whole different story. Wing bending will add inertial loads which reduce the stress in the structure and a sudden gust will not increase lift proportionally at once. It takes some time before air loads stabilize and a high frequency load will not uniformly stress the whole structure but will produce peaks and troughs. So it is impossible to give a firm number - the result will depend on a lot of incalculable factors.

Our understanding of atmospheric phenomena is quite well developed but it cannot be excluded that a "century gust" will overstress an airplane. The certification requirements aim to produce airplanes for which structural failure in normal operation is extremely unlikely and tests for strength using statistical models (where more intense gusts are less likely), but as with any statistics there might be an exceptional event which lies outside of those models. All we can say now is that this will be extremely unlikely.

18
How strong is the A380 fuselage-wing joint?
13
What are the design parameters for airliner safety?
5
How is it possible that the design criteria for turbulence intensity has nearly doubled, but the manoeuvring load factor is the same?