Is it possible for an SU-25 to fly high enough to shoot down a Boeing 777?

A common theory from pro-Russian netizens surrounding the MH-17 tragedy is that it was a Ukrainian SU-25 ground attack fighter plane which shot down the civilian airliner. However, MH-17 was flying at 10,500m when the service ceiling of an SU-25 is 7,000m. They say that this discrepancy is made by the fact that the Ukrainian pilot used afterburners to get to the height MH-17 was flying at. Is this actually technically possible?

On the whole this makes the SU-25 a poor choice for shooting down a cruising 777.

It seems unlikely that a 777 would be shot down in this way. Not impossible, but far less likely than other proposed scenarios such as those involving BUK (SA-11) ground to air missiles. 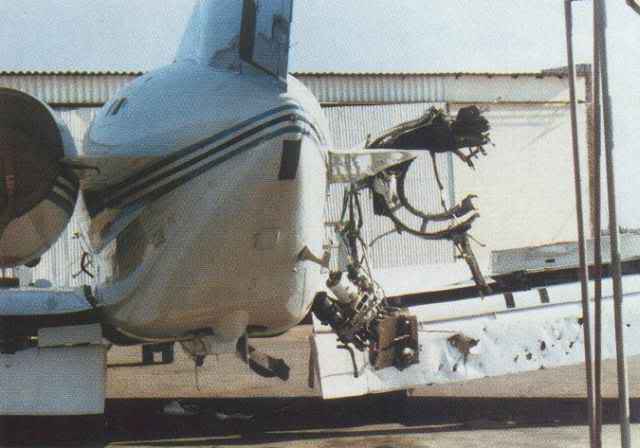 Results of an R-60 hitting a jet engine on a small business jet. 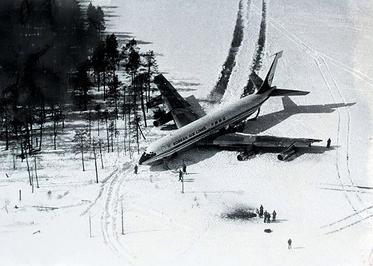 These R-60s were fired by supersonic interceptors, not by SU-25 ground-attack aircraft.

So no, the claim is utterly bonkers.

Parabolic trajectories above the service ceiling are possible. Just go up fast enough, and rely on inertia instead of lift to carry you upwards.

Of course, parabola's have the property that there's a long way up, a sharpish bend at the top, and a long way down again. That's not a practical way to intercept another aircraft, especially if your plane isn't designed to use off-board AA radar guidance to get the intercept course right (and a ground attack aircraft like the SU-25 wasn't designed like that at all - The Soviets had proper high-altitude interceptors for that)

It would not be impossible for a Su-25 "Frogfoot" carrying AA-8s to down an airliner, but it's very unlikely.

First off, let's get something out of the way; neither the R-95Sh engines on early variants, not the improved R-195 on the Su-25T variant, has an afterburner. The Su-25's primary mission profile requires it to fly low and slow over the battlefield to acquire and engage ground targets (it's the Russian answer to the A-10), and its low amount of wing sweep prohibits supersonic flight, so an afterburner is not only completely unnecessary, it's downright dangerous to try to use in a design like this. So, the idea that a Su-25 used afterburners to exceed its service ceiling is pure bunk.

A Su-25, flying at its mission ceiling of 16,000 feet (which would require the pilot to be on oxygen, which would be available), targeting a 777 at 33,000 feet, would be about 3.5 miles away, vertically, from the airliner. That's well within the range of the R-60 Molniya/Vympel, aka the AA-8 Aphid. However, it would require the pilot to point the aircraft directly upward at the airliner, which would very likely cause the Su-25 to stall before the pilot could get a good lock-on.

The maximum targeting range of the AA-8 is believed to be 5 miles; it can fly 6 miles after launch, but keep in mind the missile has to get to where the target aircraft was when launched, then cover the additional distance the aircraft has covered in that time (the missile would also have to climb 3 miles against gravity and would get none of that energy back "falling" toward the target as many air-to-air missiles do). Given the 3.2 mile vertical separation, the minimum angle the Su-25 pilot would be required to maintain assuming a "boresight" lock-on is required (the aircraft's nose has to point right at the target) is $\sin^{-1} \dfrac{3.2}{5} = 40^o$, and so the 777 could be no further in any horizontal direction from the Su-25 than $\cos (40) * 5 = 3.8$ miles. Some sources claim the R-60 can lock on at up to 45 degrees off-boresight, which would mean the Su-25, if it got a clean "uncaged" IR lock on the 777, could fire from level flight.

So, in theory, a Su-25, at its service ceiling and closer than 3 miles horizontally from MH-17, could have shot it down. However, there are no reports from civilian or military sources that an Su-25 was anywhere near that close to MH-17, and make no mistake, a Su-25 flying at 16,000 feet would be highly visible on any radar system for a hundred miles in any direction; the Frogfoot has exactly zero radar stealth features.

The German/American intelligence reports on the incident, stating that Russian-allied rebels in the Donetsk Oblast area used an SA-11 Gadfly launcher to bring it down, are more consistent with reality. This self-propelled SAM system is perfectly capable of reaching 33,000 feet (its vertical range is over 80,000 feet; it was designed with the CIA's U-2 Dragon Lady in mind) and can target an aircraft up to 20 miles away at that altitude. In addition, a Ukranian An-26 operating in the area was shot down by a similar launcher, according to the same rebel militia's own statements.

Why anyone would have targeted the civilian airliner is not known. There are several theories:

One other note to add to this... if you read the very thorough Dutch investigation, you find that MH17 was brought down by a fragmenting warhead exploding near the aircraft cockpit. The fragment pattern found on the cockpit skin wreckage is consistent with a missile approaching from the front, at an upward angle.

That is clearly a radar guided missile, approaching from the front. If this had been a heat seeking missile, it would have struck or exploded near one of the engines. The cockpit of a 777 doesn't emit any heat, while the engines definitely emit heat.

Finally, the Dutch investigation also found warhead fragments consistent with a Buk antiaircraft missile, large interlocking fragments, some with a bow tie shape, instead of the smaller rodlike fragments that most heat seekers use.

Not the answer you're looking for? Browse other questions tagged military aircraft-performance fighter jet altitude .

29
What features enable the Su-25 Frogfoot to operate with such a wide variety of fuels?

19
How high can propeller airplanes fly?
6
Do airliners adjust altitude for latitude?
113
Why does it take so long to develop modern military jets?
9
How effective was WWII bombers self defense anti-air armament?
3
What are the pros and cons of high service ceilings for fighter jets?