Can you explain with example how can I calculate magnitude and direction of resultant force from pressure distribution over airfoil? 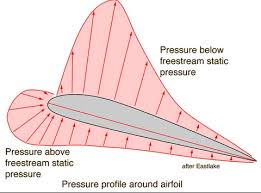 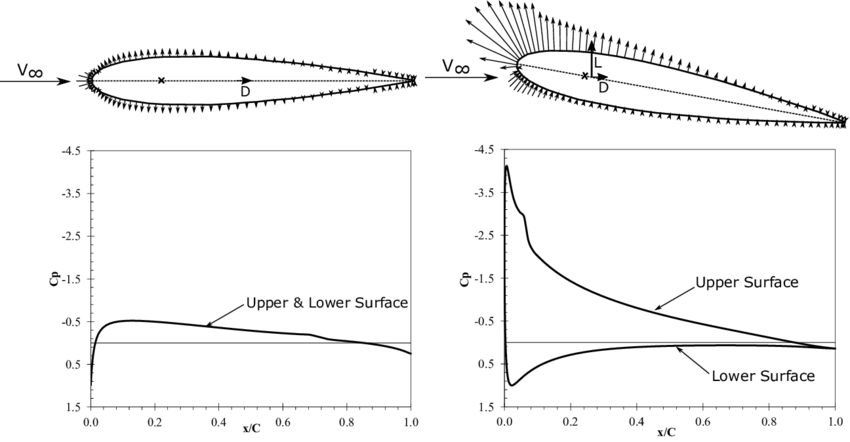 I don't know exactly you maths background, so i'll start using it for the sake of expressing it generally, and in the second part i'll try to simplify things.

Making use of the definition of pressure p as force F per Area A.

Mathematically, the shortest answer would be to integrate the (local) pressure over the surface, including the normal vector:

some notes on the symbols: pressure p is not directional, it is defined as pressing perpendicularly on the surface. Using $\vec n dA$ as "directionalized" surface area element, the normal vector $\vec n$ perpendicular to the surface would take care of the direction of in which the pressure is exercised. Note that the normal vector is "normalized" to the length of 1, so to preserve the pressure.

F as resulting force has a direction, making it a vector.

In real life (as in your diagrams) the distributions usually aren't known analytically, but just as a table of values. So you would discretize the above surface integral into segments of finite area, and then calculate the forces for each element, and at the end sum everyting up.

So I tried running a basic example: airfoil discretized in 5 segments (i through v), suction side pressure = 1bar (abs), pressure side 2 bar(abs),

ran the calculation "p * n * deltaA " and the summation in the Table below. The force units are "kPond" = 10 N, as result of choosing pressures in bar and surface area in cm^2. 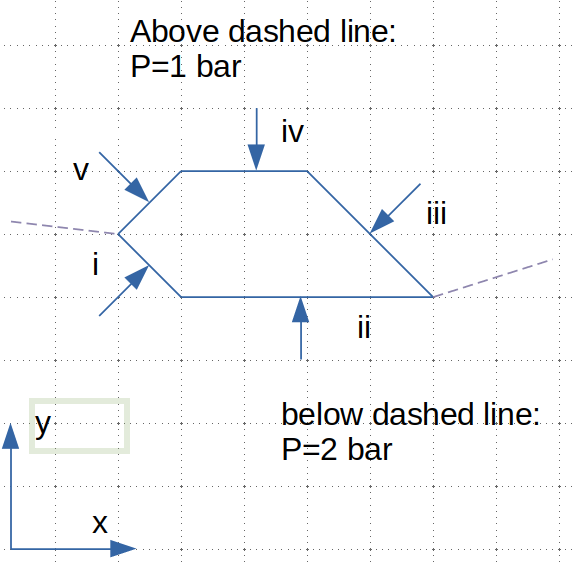 Interpretation of the Result: We get a aero force of

Additional notes: If you want to get more precise: the finer the discretization, the more precise your result will be, or you can increase the order of your numerical integration.. https://en.wikipedia.org/wiki/Numerical_integration

hope that helps! have fun integrating..

4
How should the pressure coefficient distribution from a wind tunnel experiment be interpreted?
4
What factors determine the direction of the resultant force vector?
3
What does the pressure distribution over a glider's wing look like?
4
Transonic Airfoil with high critical mach number
1
How to calculate pressure distribution over an airfoil from its coordinates?
1
How pressure fields change around wing?
3
Resultant force vs AoA, pictures?
2
How to distinguish the induced drag of a lift-producing wing from its pressure drag?
3
Why do low pressure arrows point away from the surface if the pressure/air cannot pull/suck?