What are "secondary precessional forces" that apply to boomerangs in flight?

note: This question is about the aerodynamics of boomerang flight and how it differs in microgravity environments. Some background information available here in Aviation SE: Are frisbees and boomerangs technically gliders? and in Space SE: How does one throw a boomerang in space? Does it return?

Professor and former astronaut Takao Doi is apparently the fourth person or the third person to throw a boomerang in space and the first to throw one specifically designed to work in microgravity.

Finally, on March 18 2008, Japanese astronaut Takao Doi took a three bladed boomerang (supplied by Yasuhiro Togai) aboard the Space Shuttle Endeavor on a mission to install equipment on the International Space Station. The boomerang that he threw was the only space boomerang that was specifically designed for space flight. The photo of the boomerang that Maurizio supplied to me show that the blades are recessed to the rear, as you would find in a Fast Catch boomerang. This is the optimal design for a space boomerang because when the blades are shifted to the rear, the secondary precessional forces that cause a boomerang to lay over in flight are retarded. The Japanese team of Yasuhiro Togai and Takao Doi deserve credit for making and throwing the first [multibladed] boomerang that was optimized for use in microgravity conditions.

What exactly are the "secondary precessional forces" referred to in the article?

Takao Doi in a space three-point stance throwing a returning boomerang aboard the ISS: 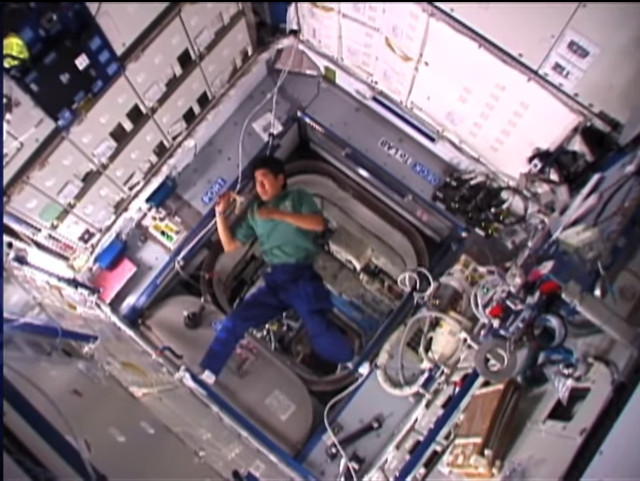 The aerodynamic forces on the boomerang are roughly like the springs that limit the (primary) precession of a rate gyroscope. These forces introduce a secondary torque, which in turn produces the secondary precession in question, which is needed to tilt aka "lay over" the boomerang. (My physics is rusty; the physics SE may be more fruitful.)

17
Do any airplane designs exist that don't involve a flight surface that provides downforce?
2
What aerodynamics forces are acting on a jet fighter during slow flight demonstration?
3
Are frisbees and boomerangs technically gliders?
1
Forces "felt" by pilot, G-meter, inclinometer--are they the aerodynamic forces generated by the aircraft, or the sum of weight+centrifugal force?
4
What are the forces present in a coordinated turn?
1
What are the primary and secondary flight controls for the SEPECAT Jaguar?