Question referes to subsonics speeds,but you can expand your answer at supersonic speeds as well.

Same topic at physics site,but we heve problem here because members have opposite oppinions: https://physics.stackexchange.com/questions/602876/does-flow-separation-starts-earlier-at-higher-airflow-speeds/602888?noredirect=1#comment1356599_602888 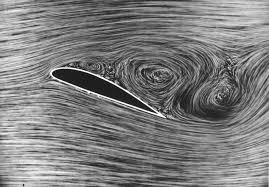 It is generally assumed in incompressible aerodynamics that the Reynolds number over a wing is so high that the effect of the Reynolds number (same air viscosity, same wing chord, only variable in Re is speed) on the lift coefficient is negligibly small. I can think of two areas where this assumption breaks down:

high speed airflow has more inertia, so it seems intuitively it will be harder to follow a curved surface

We can observe that the area of compressed air in front of the wing forces the free stream to bend earlier at higher velocity. This means, inertially the free stream will follow less of a curve (and the transition zone starts further forward).

At higher airspeeds the flow separation point also moves back, creating a larger, more stable area of lifting low pressure above the wing. Notice, at lower airspeeds, many planes employ vortex generators to energize the airflow in an effort to squeeze a few more degrees of AOA before separated airflow collapses the lift bubble, creating a stall.

What makes this study a little confusing is the effect of velocity on lift. Most aircraft lower AOA at higher velocity long before a change in Reynolds number effects the separation point.

Hence, we universally are taught that AOA is the critical factor in "stall" flow separation regardless of airspeed (within the planes normal flight envelope).

8
How much noise does flow separation cause?
2
How to calculate aileron deflection for achieving similar roll dynamics at thin and dense air?
2
What causes the adverse pressure gradient that leads to flow separation?
5
Do leading edge flaps increase the critical angle of attack?
2
Why does the effective alpha/CL increase at wingtip of swept wing?
13
What is the difference between flow separation and turbulent flow?
1
How does the turbulent boundary layer thickness affect separation?
3
How can a small airflow that passes through a slots redirect all the outer flow?