Is air to air refuelling possible at "cruising altitude"?

When an aircraft uses air to air refuelling are there constraints on the maximum altitude this can take place at?

For instance I'm guessing that a Boeing Globemaster when on a long journey would cruise at 8,000m or higher (Wikipedia says service ceiling is 14,000m / 45,000'). Is there any reason why air-to-air refuelling can't take place at that sort of height?

I'm wondering whether there's something about the lack of air pressure that makes it problematic to transfer fuel or the speeds that must be used for the transfer are not viable at very high altitudes.

The main limitation is that the receiver needs to have enough excess thrust available to be able to precisely maintain formation on the tanker. Near the service ceiling, you typically don't have a lot of excess thrust, so refueling happens somewhat lower than that. Since fighter generally have more excess thrust at a given altitude than a transport will, they can refuel at somewhat higher altitudes.

Other than wanting to have enough excess thrust available to accelerate forward in the event of a "breakaway" call, tankers don't have particular limitations that I'm aware of, though I've not flown those. (I'd assume being right at the limits of IAS / TAS isn't particularly comfortable for a tanker, so at least something below their service ceiling, but I don't know what that limit is.)

Pumps, rather than differential pressure, move the fuel, so that system is unlikely to drive any altitude constraints.

It's common to hear refueling happening in the mid-20's over the U.S. How much that's driven by airspace availability vs by performance, I don't know.

The Airbus tankers will be able to refuel a wide range of aircraft such as NATO AWACS surveillance planes; F-35, F-16 and Rafale fighter aircraft; and C-17 transport planes. Refueling can be performed at an altitude up to 35,000 ft while cruising at speeds between 180 knots and 325 knots. 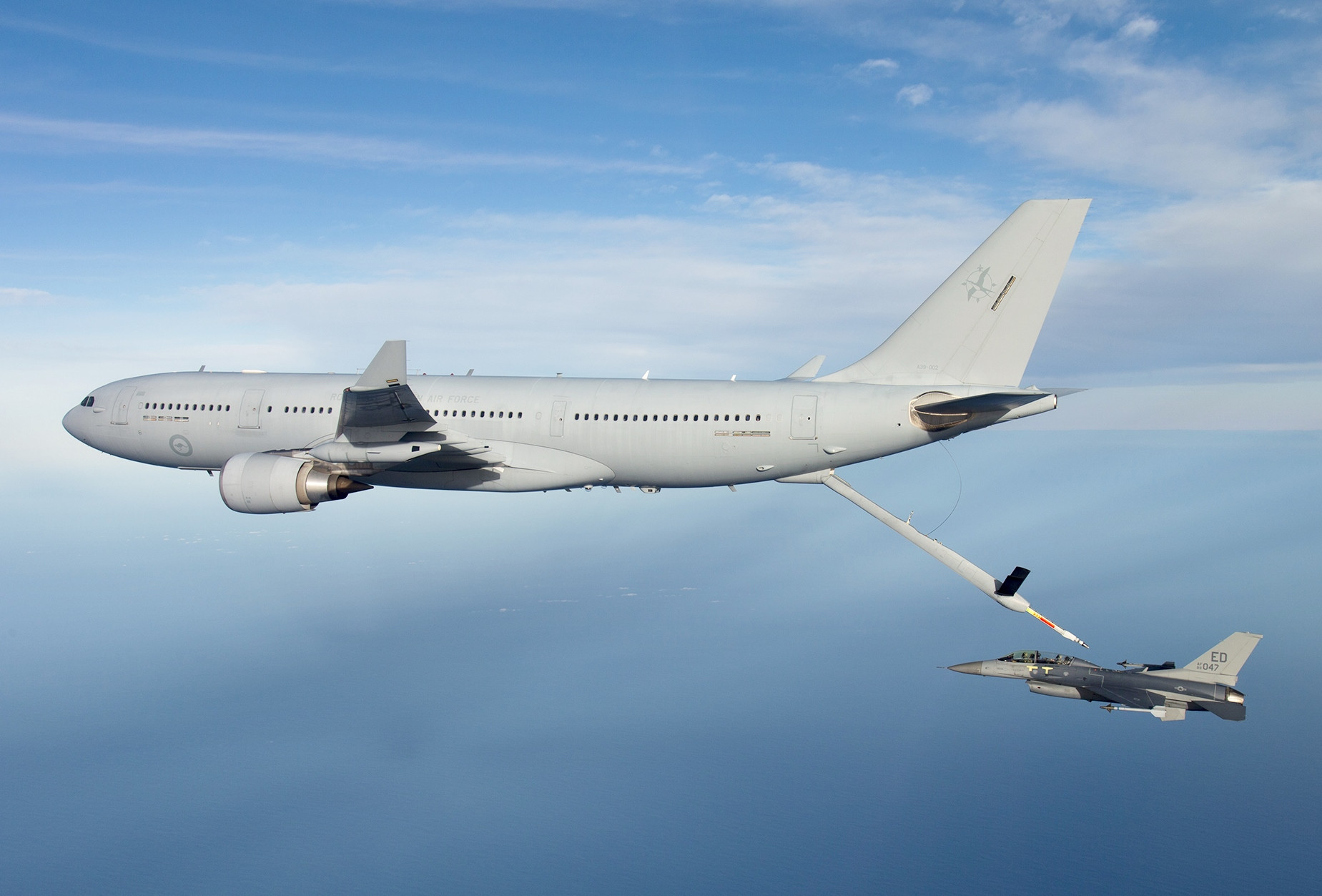 The A330mrtt has a service ceiling of 42,700ft so refueling is constrained to occur below the maximum cruising altitude of the tanker, but not by much.

The service ceilings for the F35, F16 and Rafale are all above 50kft, so fighters are not the constraint. The AWACS service ceiling is 35kft, while the C17 goes to 45kft. The website did not disclose whether each class of aircraft had a different limit.

Fuel is transferred by pump and is independent of speed or altitude.

In response to comments:

The MRTT designation stands for Multi Role Tanker Transport; intended for uses in addition to tankering. It is based on the A330-200 but uses the A340 wing which has reinforcing for two outer engines, which are swapped out for Cobham fuel delivery pods. Standard passenger and cargo decks cover the transport part of the designation; tankering fuel is only carried in the wings unlike the KC10 which also has aux tanks in the cargo hold.

Airliner-type aircraft fly close to stall speed at cruise altitude as their maximum speed in terms of Mach (Mmo) and their stall speed are within 15-20 knots to each other. Tankers cannot fly any faster (excluding buddy tanking, which generally happens at much lower altitudes and in the vicinity of the carrier), so fighters are also constrained to fly close to their stall speed to stay with the tanker. Fighters (well all aircraft actually) are sluggish to maneuver at that speed and this makes refueling more difficult. Furthermore, the weight added to the receiver during refueling more strongly affects the behavior of the receiver at low airspeeds.

For this reason, refueling is normally done at lower altitudes, to enable the tanker to fly at higher indicated airspeeds to keep the receiver aircraft further away from stall.

The SR-71 used to refuel very close to its stall speed, while the KC-135Q tanker flew at Vmo at an altitude where Mmo was not a problem. Despite this, to stay with the tanker and not stall, the SR-71 had to light one afterburner when its tanks were close to full and refueled with a sideslip.

Some of the answers have hinted at a bit of a problem in the question, but I think it's worth bringing it out a little more clearly: whose cruising altitude do you care about?

As others have also alluded, you do need more maneuvering than just normal flying so as a starting point, take the aircraft with the lower cruising altitude, and subtract something like 20% for a starting point on a reasonable altitude for refueling.

Not the answer you're looking for? Browse other questions tagged altitude mid-air-refueling or ask your own question.

7
How is fuel stored in a tanker aircraft?