What kind of test is going on in this image?

Some times we see images of jet engines on the net that have strange colors. For example take a look at the bellow image. What the operator is doing? Why the color of blades are white with red on its borders? why are they numbered? why is the color of spinner yellow? 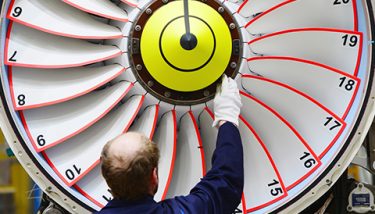 This is most likely some kind of a test where high speed photography (as in 5,000 - 10,000 frames/second) will be used to capture the detailed motion of the fan blades.

Types of tests that might require this type of video include fan blade out testing, bird strike testing, and icing / hail testing. There may be others but those are the most common.

Why the color of blades are white

In order to get 10,000 frames per second you need a lot of light. There will be many high powered lights shining on the engine. You don't want harsh reflections from the lights, so you need a matte finish, the flatter the better. The normal blade finish is way too shiny. So they are painted.

with red on its borders?

just for contrast, so you can very clearly tell in video where the blade stops and the fan case starts. The exact color is arbitrary, and different OEMs have different traditions. You are just looking for a set of colors are very different from one another.

why are they numbered?

So in the high speed video, you can see what happens to what blade. For example, in a hail test, you might observe that a giant chunk of hail hit blade #15. You could then go inspect blade #15 afterwards and see if there is any damage.

why is the color of spinner yellow?

Same as the red border. Just for contrast, so you can see where the blades stop and the spinner starts.

What the operator is doing?

I don't know exactly. Obviously some kind of assembly or disassembly procedure. You can tell in that photo that the inlet is not attached, he's right up against the plane of the fan blades. So it's not a fully assembled engine on the airplane or on a test stand. It's clearly in the factory somewhere. But what exactly he's doing I don't know. Honestly could just have been "hey we need some publicity photos for Aviation Week, pretend to do something interesting with the engine".

The blades may be part of a test fixture. The uncropped image is from a 2018 report in the Telegraph, which includes another photo captioned 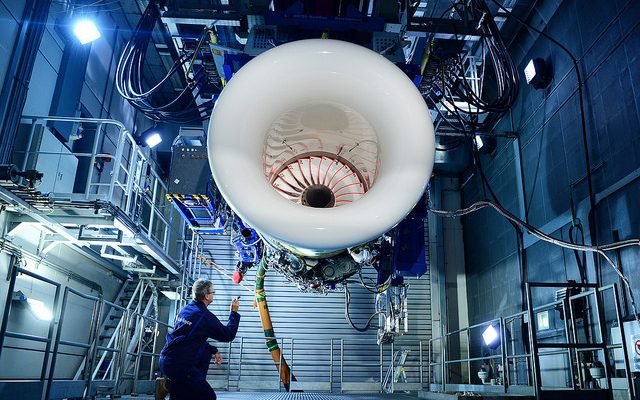 5
How do contrails compare between piston-powered aircraft and jet aircraft?
0
What kind of liquid can be seen 'leaking' from the bottom of a Boeing 737-800 engine?
3
How does the power distribution change for a turbofan engine from being stationary to going at full speed?
32
Why don't modern jet engines use forced exhaust mixing?
2
Are centrifugal compressors/turbines less efficient internally, and if so, why?