Why does TAS increase as altitude increases and why does my C-152 POH seem to contradict this?

I remember learning and memorizing that TAS increases as altitude increases, however I don't understand why. Especially since my C-152's PoH seems to indicate the opposite in the cruise performance section. Can someone please explain what I'm misunderstanding here? 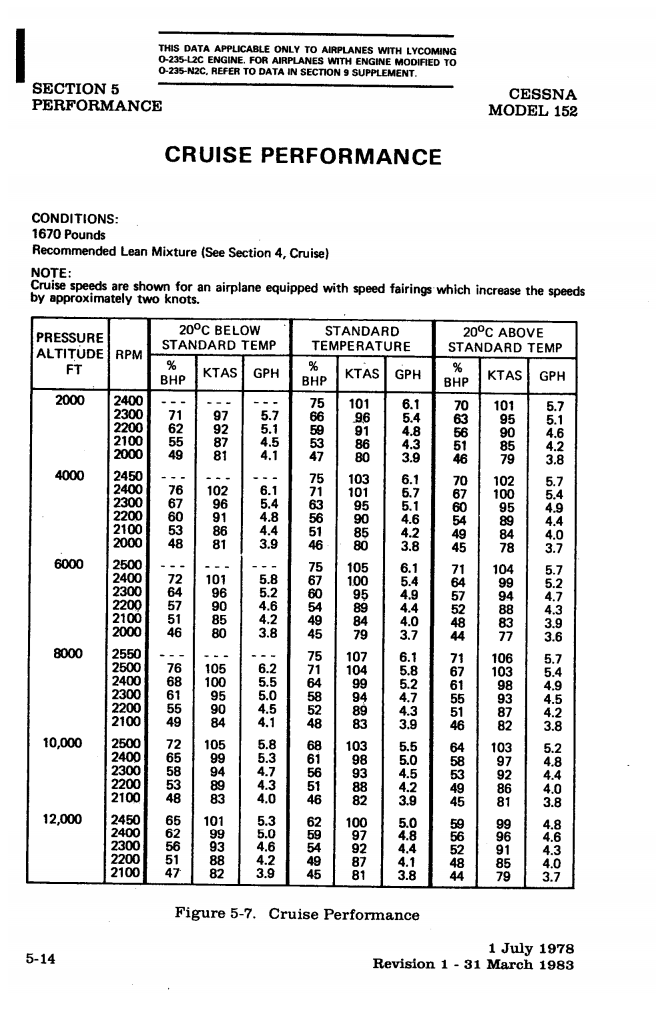 To the extent that 75% cruise power available is constant with increasing altitude, it's simply that TAS goes up because the constant HP has less and less resistance to work against as the air thins out, while you are able to maintain 75% cruise power by opening throttle more. On a non-turbocharged engine, that is possible up to the point at which the engine is maxed out making cruise power (75%), somewhere around 8000 feet give or take (where the available manifold pressure at wide open throttle drops to about 22").

If the engine had turbocharging, it would be able to maintain 75 HP (75% of 100) to some much higher altitude and you could climb to say, 15000 ft, still making 75 HP in the even thinner air thanks to the turbo, and your TAS would be up to something like, say, 115 kt (you would also need a constant speed prop to exploit that power, but that's another issue).

According to the equation, if we want to keep the IAS or Q constant in a climb, the TAS should increase, because there is a decrease in density (rho) with altitude. So, there is absolutely nothing wrong with what you have learnt, because it is correct in the sense TAS increases with altitude.

So, why is your POH contradictory. Let us look at it, shall we? I will use the data given at 2000 ft and 12000 ft, under standard temperature to explain what is happening. 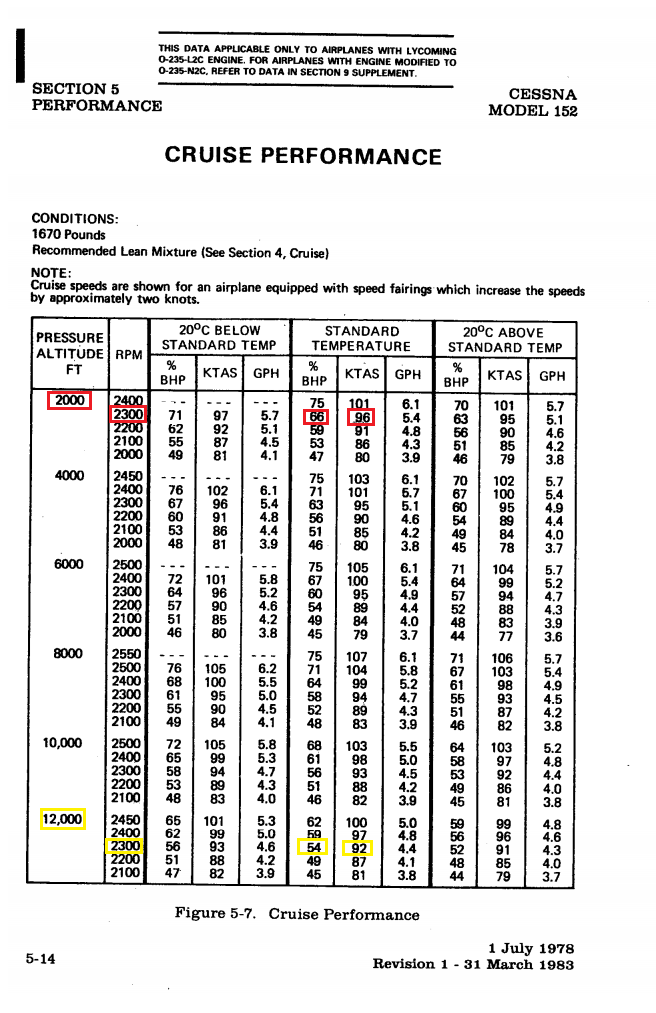 If we look at the table we can see that at 2000 ft, if you cruise at 2300 RPM, the engine is able to produce 66 Brake horsepower. The result is a TAS of 96 knots. But at 12000 ft the same engine is only able to produce 54 Brake horsepower at the same 2300 RPM. The reason why the TAS dropped to 92 knots is because your engine is unable to generate enough power at higher altitudes due to the reduced air density (C-152 has a normally aspirated engine). Hence, the aircraft is unable to fly at a higher TAS. If you want to increase your TAS you could increase the RPM to 2450 (more air rammed inside the cylinders) and get a TAS of 100 knots, but that will cost you more fuel.

It is expected that you will climb at the speed for best rate of climb (Vy). Once you reach your cruise altitude, you will push the nose down to level off, pull the power back to the desired RPM and trim it. If you climbed to 12000 ft and set 2300 RPM and trim the aircraft, the IAS that is shown in your air speed indicator will result in the tabled value of 92 knots. The value of IAS is not mentioned in cruise performance is because TAS is what determines your aircraft navigation performance and fuel consumption.

Although, it is a backwards way of thinking about it, consider that the True AirSpeed is not changing with altitude for an aircraft keeping a constant speed. In actuality, the Indicated AirSpeed is what is changing. This is due to the IAS being measured by using Ram Air Pressure inside of the pitot tube. The RAP is directly related to the density of the air. The higher the air density, the higher the RAP at the same speed.

More gas molecule mass in the air is entering the pitot at any given time at lower density altitudes (higher air density). Think of it this way. A single bb would have less impact than 100 shot gun pellets fired at the same muzzle velocity.

Your pitot static system is actually measuring the impact of the air molecules and converting that into IAS. In order to fly at a constant IAS at a higher altitude, you have to increase your TAS because the air is less dense (fewer air molecules).

For a given power setting, True Airspeed increases with altitude because there is less drag due to the air being less dense. Aircraft are more efficient at high altitude because of this simple fact. Providing the engine can produce enough power, any aircraft will fly faster and further, without burning more fuel, if you fly at a higher altitude.

Your C-152 chart shows this quite clearly.

Inflight, the IAS is measured via the pitot/static system and is displayed on your ASI, the primary airspeed display instrument. TAS cannot be directly measured by a probe or transducer, it has to be calculated by using the IAS as a starting reference.

IAS: The pitot pressure is static pressure + the pressure on account of air molecules impinging on the pitot probe from the direction of flight. If the air density reduces, as it does with altitude, in order to fly a given IAS, it requires the airplane to fly faster through the thinner air for the pitot to experience the same pressure and indicate the same IAS. This faster speed is your TAS. Aerodynamic forces such as lift, drag, propeller torque/thrust etc. all depend on the flow of air molecules over the wings and body of the airplane and stall speeds, maneuvering speeds and limit speeds all relate therefore to the IAS.

TAS: is a calculated speed, as there is no instrumentation to physically measure it - in it's simplest form it is arrived at by plugging the IAS into a formula and based on the International Standard Atmosphere. TAS is useful for planning and actual navigation as it is your true speed in relation to the ground in nil winds.

Atmospheric Air Density as per ISA: As per the Standard atmosphere around 6600ft the density of air is about half of what it is at Mean Sea Level, at 12000ft around a quarter, and around 18000ft it is a tenth of the sea level density and so on.

In the cockpit you can either fly a speed on the ASI (adjusting the RPM to suit) or you can fly the manufacturers recommended RPM and accept the resultant speed on the ASI.

As per the POH page, you input altitude and RPM (with mixture leaned) and the table gives you the Power, TAS, and Fuel consumption. The chart gives you this data for an airplane weight of 1670lbs and various RPM settings of the engine at even thousands of feet altitude ranging from 2,000 to 12,000 ft. (And for ISA, ISA-20degC, ISA+20degC.)

An input of altitude - RPM - OAT/ISAdev gives the TAS and fuel consumption per hour. These are the parameters you need alongwith forecast winds to make out a navigation and fuel flight plan. TAS and Wind gives Groundspeed/leg times and Heading to steer, and further with Fuel cons/hr it gives you the fuel for trip etc. The fact that the table outputs no IAS is of no particular disadvantage in the cockpit.

The data could have been shown by using a fixed IAS strategy, replacing the RPM settings with different IAS values in which case you would input altitude, IAS, Temp/dev the chart would output an RPM, TAS and Fuel consumption.

11
When a plane flies faster than the speed of sound, does the distance between plane and sound increase?
6
Why does indicated airspeed change with altitude?
5
Why does an airspeed indicator not simply read TAS?
2
What is the relation between IAS and TAS at a constant altitude?
14
Why do aircraft have a crossover airspeed, and why does it increase at higher vertical load factors?
1
Why does an increase of airspeed result in a decrease of angle of attack?
2
How does altitude affect the TAS and thrust of an electric fan powered aircraft?
1
Why is this equation for TAS only valid for subsonic flow?
3
Does anyone know why IAS and Mach are inconsistent in Boeing FCOM?