Could a Combined Inverted Brayton Cycle and rankine cycle engine be used as a power source in a high altitude hybrid aircraft? 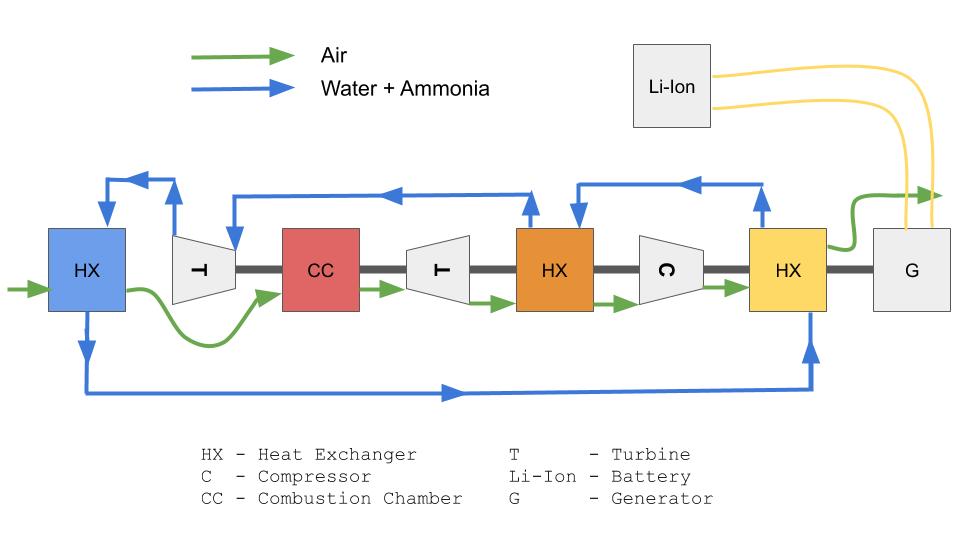 From the Institute of Combustion Technology - DLR

In the inverse micro gas turbine process, the flow of the individual components occurs in a different sequence than the conventional MGT cycle (Brayton cycle); see Figure 2. In an IBC-MGT, the process air is fed directly into the recuperator (2), heated and forwarded to the combustion chamber, where it is mixed with the fuel and burned (3). After exiting the combustion chamber, the exhaust gas is led through the turbine, where it expands below ambient pressure (4). Subsequently, the exhaust gas is first cooled in the recuperator (2) and then in the downstream water heat exchanger (5), before being compressed to atmospheric pressure in the compressor (1). In this inverse cycle - as in a conventional cycle the turbine again generates more energy than is required for the compression process, so that a generator (6) can be run. As a result of the compression, the exhaust gas is heated, and can thus be cooled down again in a second water heat exchanger (7) in order to exploit as much of the released energy as possible.

Ignore the blue line in the above diagram for the basic cycle without exhaust gas recirculation.

The Kalina cycle is a rankine cycle like a steam cycle. It uses a mixture of ammonia and water. This reduces the boiling point of the mixture.

Air (the green arrows) passes through a heat exchanger and is heated. This heat exchanger acts as a condenser to a separate closed rankine cycle (water-ammonia). Then the air enters an inverted brayton cycle. It passes into a combustion chamber, and then is expanded to subatmospheric pressure in a turbine. The air is then cooled in a 2nd heat exchanger, then compressed, and finally passed through a final heat exchanger and back out to the atmosphere. The work extracted as it expands through the turbine is less than the work taken to compress it.

Meanwhile the water-ammonia cycle is being progressively heated by the second two heat exchangers. This fluid is then expanded through a turbine before passing into the initial heat exchanger/condenser.

The turbines and compressor are linked through a single shaft to a generator that charges a battery or powers the plane.

The plane takes off and climbs to altitude on battery power using an electrically powered propeller. Once at altitude it switches from the battery to the combined cycle power plant.

At altitude the incoming air is very cold this increases the effectiveness of the condenser, reduces its size, and improves the efficiency of the cycle.

Browse other questions tagged electric-engine airframe-and-powerplant or ask your own question.