What are the primary and secondary flight controls for the SEPECAT Jaguar?

What lift augmentation devices are used in the SEPECAT Jaguar? I couldn't find any information.

According to airvectors.net, the flight controls of the SEPECAT Jaguar are:

There were no ailerons, roll control being provided by a two-section spoiler on top of each wing, just forward of the outboard flaps. There was a prominent "fence" between the inboard and outboard sections of the wing. Along with a conventional tail assembly, with all-moving one-piece tailplanes, there were two ventral fins. There were twin hydraulically-operated perforated airbrakes ahead of the ventral fins, under the wings. The hydraulic system was dual-redundant.

The omission of ailerons from a ground attack fighter might seem odd, as one might presume this makes the plane less maneuverable. But, as described in the first sentence of the quote, the Jaguars main mission was to (or at least it often had mission critical sections with) flying fast and low, which often translates into a very choppy ride. This was mitigated by the use of a smaller wing = higher wing loading. To achieve low enough approach and landing speed with such a small wing, efficient and large flaps were needed. As sufficient and consistent roll control is somewhat hard to achieve with flaperons (or at least it was when Jaguar was designed), the Jaguar had to make do with full span flaps and use spoilers for roll control. 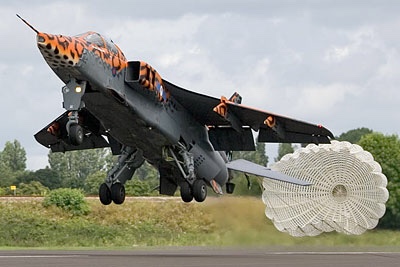 Looks like there is a dog-tooth leading edge and no slats, with flaps at the inboard trailing edge.

Edit: Notice how the stabilator tailplane is trimmed, as well as the ailerons.

Not the answer you're looking for? Browse other questions tagged aerodynamics flight-controls sepecat-jaguar or ask your own question.

12
What are the vertical pieces of metal on the Slingsby Swallow wing for?
5
What are the differences between a slot and a slat?
0
Does the Piper Aztec have flaps and slats and if so what kind?
2
What high-lift devices are used on the Bombardier Dash 8 Q400?
0
Zenith-Add horsepower, NASA-add drag: to create lift. How is this possible?
5
Why do the A320’s primary flight controls have hydromechanical backups only for the rudder?
0
what are the Common roll angle and roll rate limits for civil flights?
1
Helicopter Flight: What is the reason for decrease in Induced drag with increase in speed?
4
How do linear actuators for flight controls work in fighter jets?