I was wondering what defines horsepower in an airplane piston engine and how can it be changed?, is horsepower changing during flight?

See the figure below, it's a sample that shows drag that you need to overcome with your thrust at different velocities. It's for an example 700 kg airplane at 100 m ASL (above sea level) with 150HP or 250HP engines. Of course, the 250HP one will weigh more, but I've ignored that for this example. Max throttle assumed, though you can change it during flight. One throttle (power) setting will give you max range, another will give you max endurance, while max throttle will often give you best manoeuvring performance. 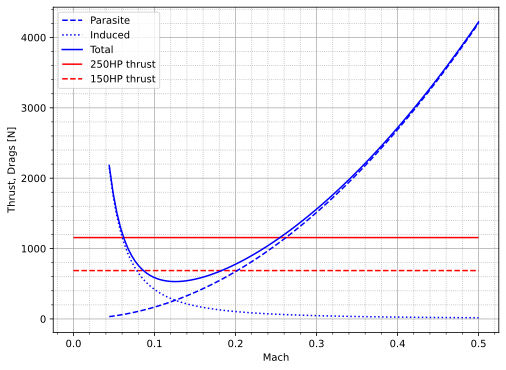 Hope that answers your question. Have a nice day!

Horsepower is torque x RPM so it changes with throttle and RPM.

The published value is the maximum horsepower rating, and is the rating of particular engine at wide open throttle at sea level, and redline RPM, on a standard day (59F, 29.92" of mercury).

So, as a rough rule of thumb, the engine's horsepower rating tells you, mainly, that the displacement in cubic inches is approximately the rating x2, give or take say, 5-10%, for a normally aspirated direct drive engine.

To get significantly above that requires reduction gearboxes to allow the engine to spin (pump air) faster and if you look at a geared engine like the Rotax 912, you are getting about double the power per displacement, or 1 HP per cu in (80 hp from 79 cu in).

Not the answer you're looking for? Browse other questions tagged propeller engine aircraft-physics piston-engine or ask your own question.

6
How is horsepower measured for aviation piston engines?
2
Does useful load increase with more horsepower?
11
How critical is it if a pebble blows into a propeller?
0
How do turbofans and piston-engines compare in terms of maintenance costs?
5
What are the consequences of pumping the throttle in an carburetor piston engine airplane during start?
1
What is the Efficiency of Cessna-150's Propeller?
2
Is the purpose of variable pitch propellers to maintain an optimal angle of attack?
4
What is the difference between BHP (brake horsepower) and HP (horsepower)?