How does the rudder on the Rutan Long-EZ work?

I wonder if someone can explain how the rudder on the Rutan Long-EZ works. I have an idea that it is the induced drag which yaws the plane.

It's a combination. There is a lateral yawing force that is a function of the offset between the rudder's lateral lift force when displaced, and the C of G, like any airplane. The moment arm is quite short so it can't generate a very strong yawing moment compared to a normal tail.

However, the drag produced by the rudder, being way out on the wing tip, magnifies the yawing force as the drag force is added to the direct yawing force to get a resultant force vector which provides a stronger yawing moment than the lateral yawing force alone.

This allows a rudder surface that is smaller than a centrally located rudder would have to be, with the same longitudinal offset from the C of G, that is depending purely on lateral lift for its yawing moment (like with forward-swept flying wings with enormous central rudders a-la Marske, or if the Long-EZ had a rudder where the propeller is).

A useful side benefit of the Long-EZ's rudder configuration is due to the fact that each rudder can be displaced separately (each one is connected to one pedal, and only moves out from neutral and there is no interconnection between them); you can deflect them both outwards at the same time and use them as speed brakes. 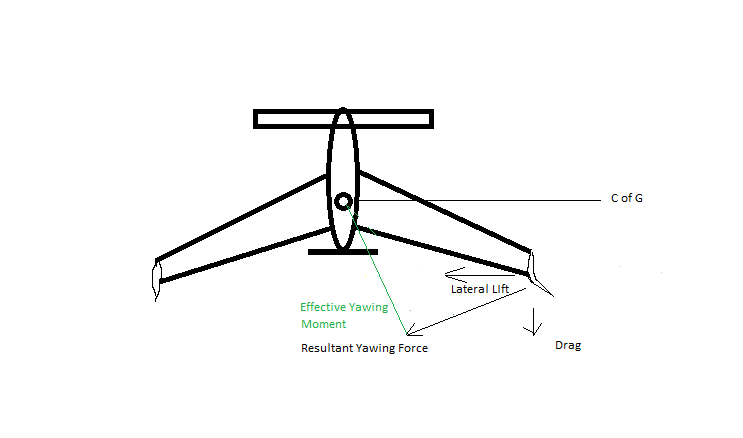 15
Does the rudder need to be held throughout a coordinated turn?
27
What is the advantage of the two-part rudder and how does it work?
3
How does a helicopter rudder work?
5
How is a sideslip maintained (aerodynamically)?
6
Do aerodynamic forces and moments change aircraft pitch and yaw in the same way?
27
When does an airliner switch from using the tiller to the rudder?
7
Why does the A320 use the rudder for lateral control in mechanical law?
2
In F-16 the pilot or FLCS , use the rudder to address the adverse yaw effects in direction of roll during an aileron roll? or opposite way?
7
How to use Rudder during takeoff in single engine propeller aircraft? e.g. Cessna 172