What are the pros and cons of buying a kit aircraft vs. a factory-built one?

I am a student pilot, and I am trying to decide on what I should do for a plane. I am leaning towards buying a kit, but what are the advantages or disadvantages for that?

The objective is very important. You don't build an airplane because you want one faster or cheaper. Neither is the case. The kit won't be cheaper, and it'll take 1 to 2 thousand manhours, minimum, of your time (take the building time claim of any kit and double or triple it to get reality).

You build one for the experience of building one. A lot of people who build aircraft go on to build another for that reason (the guy that built the homebuilt I own built two more after mine).

If money's an issue, the most cost effective and efficient way to keep flying after your training is to find one or two partners and buy the nicest creampuff Cessna 150 or similar aircraft you can find (really nice 150s go for around 30k). With the fixed costs split 2 or 3 ways the expenses don't become painful (if you have to start making financial sacrifices, it takes away the fun - been there done that) and it'll be easy to sell when you want to get something bigger.

If you're mechanically handy and want to maintain an a/c yourself, buy a used homebuilt or LSA. Only look at a kit because you want to experience the building of the kit.

The big disadvantages of a kit: it will take you years to have an airplane ready to fly, and you'll be flying an airplane built by a novice builder.

The main advantage of a kit: you (often) don't need all the money up front. Buy the fuselage kit, build it. Then buy the wing kit, and build that. Not all kit planes are sold this way, but several are. No need to pay for the engine, instruments, radios until the airframe is essentially done.

A good compromise is to buy an older, used, factory-built airplane. You can, with patience, get one of those for the price of a luxury car (50-75k USD, these days), sometimes less than the total price of a kit, instruments, and engine; you'll have something that's more familiar to your mechanic, for which parts are standardized (as opposed to "make it yourself"), with a type certification (meaning you get FAA notifications if a problem crops up that affects an entire type, even if it's 25 years old).

Not to mention, you get to fly something that's, in certain ways, cooler than a brand new airplane, whether factory or kit -- and often easier to fly. No, a 1948 Cub isn't as fast as a brand new Velocity -- but it'll be cheaper, cheaper to maintain, cheaper to repair, and cheaper per hour to operate. And what's cooler than a Cub?

The other answers are good, there's a couple of aspects that haven't been covered that I'll touch on in my answer.

Kitplanes have a higher rate of accidents overall than certified airplanes. There's a good article from kitplanes magazine that breaks down causes, it's not authoritative but it's extremely useful in showing the differences in accidents between kits and certified airplanes. One graphic is especially relevant: 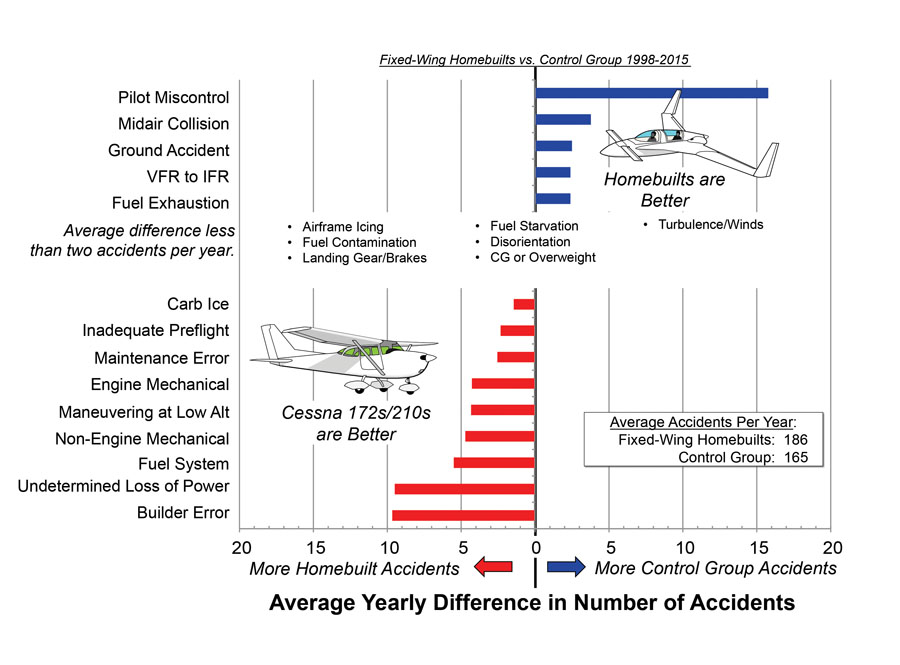 Cessna 172s are widely used for training, I suspect the miscontrol rates of certified airplanes are due to that. What really shows clearly is that the major causes of the higher rate are builder mistakes, maintenance mistakes and a higher rate of mechanical problems. If you buy a kit airplane you are getting something amateur built and maintained, certified airplanes are by regulation rigorously tested and built, then thoroughly maintained, all at a cost.

I'm not a pilot, though I am an aviation enthusiast, and here are some of the pros/cons that have not been mentioned yet.

Not the answer you're looking for? Browse other questions tagged usa student-pilot aircraft-purchase homebuilt or ask your own question.

21
Can you tell ATC you are a "student pilot" when you are not?
10
What are the best practices for gathering preflight weather and information?
16
What are the must-checks for purchasing an airplane?
15
What are the pros and cons of single-engine vs. twin-engine?
6
How do the various DUATS differ?
15
What do I request when contacting tower of an airspace I'm transiting over?
1
Can the Mexican presidential aircraft be sold?
3
How feasible is it to sell a plane with an expiring annual?
2
How can I best use the ACS?