On old sectional charts, what was the purpose of the domestic ADIZ regions and what was the difference between a "Defense Area" and an "Open Area"?

Looking at an old US sectional chart from 1956, I noticed a few oddities around where Air Defense Identification Zones (ADIZs) were placed.

Compared to modern airspace where the US ADIZ is strictly off the coast and along the borders, there appear to have been additional land-based ADIZs dividing the country up into three parts. There was also a large ADIZ centered over Albuquerque. They also seem to have made a distinction between a "Defense Area" and an "Open Area".

What was the purpose of having an ADIZ inside the country? What's the difference between an "Open Area" and a "Defense Area"? And just what was so special about Albuquerque? 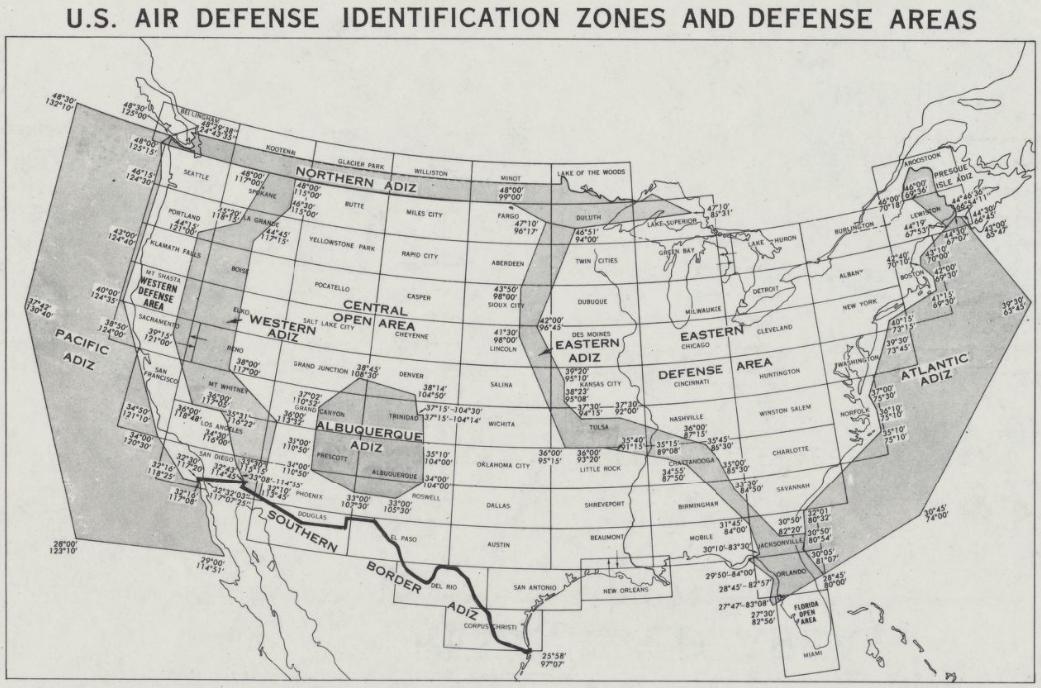 Originally they were zones to protect Americas nuclear testing areas and other key military interests. The Albuquerque area was likely there to protect Los Alamos Laboratory and other related nuclear assets of the era.

This report prepared for congress (on a slightly different topic) has some notes on this in the "History" section.

They explain an ADIZ as:

An ADIZ is a designated area of airspace over land or water within which a country requires the immediate and positive identification, location, and air traffic control of aircraft in the interest of the country’s national security.

Which does not necessarily limit it to border monitoring. The modern ADIZ is large a border related zone but that was not always the case.

In 1948, the U.S. Air Force designated several offshore areas as “active defense areas” or “defense zones.”3 From these, the first ADIZs in the world were established in 1950, under an Executive Order directing the Secretary of Commerce to exercise security control over aircraft.4 Various defense zones were redesignated as ADIZs.5 The present-day U.S. ADIZs, including the contiguous U.S. ADIZ, the Alaska ADIZ, the Guam ADIZ, and the Hawaii ADIZ, are codified in Title 14, Part 99, of the Code of Federal Regulations, along with the procedural requirements for flights operating in these designated areas. They are predominantly located over water and typically do not extend to the shore, leaving a narrow strip of sovereign airspace parallel to the coastline that is not within the ADIZ.

At the time, U.S. ADIZs included offshore regions stretching from Maine to North Carolina in the Atlantic, and from the U.S.-Canada border to waters off the Baja California in the Pacific. Additionally, several over-land areas were designated as ADIZs, mostly along the west coast and south of the U.S.-Canada border, but also above interior lands around Albuquerque, NM, and Knoxville, TN, as part of national security efforts to protect key nuclear research facilities in these regions. The over-land ADIZs no longer exist. For a time, portions of the special flight rules area (SFRA) around Washington, DC, established after the 9/11 attacks in 2001, were designated as an ADIZ, but this airspace is no longer referred to as such.

This map just pre dates the deployment of the Distant Early Warning System in the north and various Nike Missile Sites that were put on either coast but you can see how the American costal strategy was shaping up in a post WWII country which is interesting.

You can find the old 1950s regulations in the November 1, 1955 Federal Register. There's nothing special about that particular edition; I just happened to find them there first. The definitions of ADIZ and Defense Area are the same there as they are in the current FAR Part 99. In particular, a Defense Area is "any airspace of the contiguous United States that is not an ADIZ in which the control of aircraft is required for reasons of national security." Today, all United States airspace that is not ADIZ is Defense Area. The last part of the definition, about control of aircraft required for reasons of national security, is an oblique reference to SCATANA or ESCAT. In other words, a Defense Area is an airspace that is not ADIZ, but in which SCATANA or ESCAT may be implemented.

We also get the definition of "Open Area" from there, and it is essentially an area that is neither ADIZ nor Defense Area. In other words, an area where SCATANA will not or cannot be implemented. This area doesn't exist any more, but maybe it made sense in the 1950s, at a time when defense strategies were limited and the greatest threat was that of enemy bombers attacking the coasts rather than ICBMs attacking anywhere. It means that the air defense of the country was concentrated on the coasts within range of offshore enemy aircraft carriers (or wherever they were expecting attacks to come from).

So, the Defense Areas were the areas where attacks were expected to happen, if they were to happen, and were protected around their perimeters by ADIZ's. The Open Area was an area that was left defensively open because it was out of range (or something, like maybe the government hated the citizens of Miami?) of an expected air attack.

Not the answer you're looking for? Browse other questions tagged aviation-history usa airspace aeronautical-charts or ask your own question.