Would a wingtip stall still be bad if there was no aileron there?

If there was no aileron on the wing tip, would a tip stall still be bad compared to a root stall?

Control effectiveness: We do care about ailerons

The fact that there is an aileron at the wingtip implies that flow separation (stall) at the wingtip results in significant decrease or complete loss of aileron effectiveness during a tip stall. As a result, as you imply by your question, designing aircraft to begin their stall at the wing root (or, otherwise, to implement some device such that control effectiveness is maintained at high angles of attack) is a typical practice. Peter Kämpf has a very detailed answer about this (and other topics related to stalls in swept-wing aircraft) here, and there's another answer from AEhere Supports Monica and another one JohnK that gives a summary as well.

But what if the aileron wasn't there?

However, if the aileron did not exist, loss of lift (and increase in drag) at the wingtips is still of great concern. Insofar as the stall itself goes, when I think of the dangers of losing lift at my wingtips, I think of spins, which look like the below. This "classic" spin entry is caused by a sideslip (in this case, to the left wing) with the stick pulling back to put the aircraft into a stall. In this case, the left wing is operating at a higher angle of attack than the right and stalls first, creating the conditions for a spin. 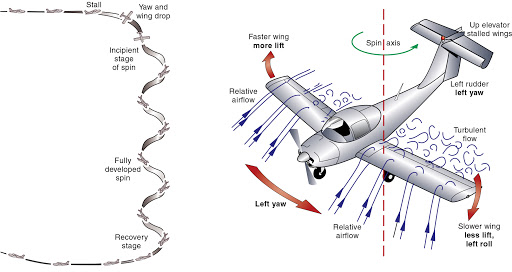 When I did spin training in a Grob 103 sailplane (with your typical control setup of elevators, rudder, and ailerons), the mantra was put the stick neutral, push the rudder opposite the spin, then recover in pitch. The ailerons were not a part of the recovery (until, perhaps the very very end once the airplane has started flying again and you find yourself not quite level). This is not the case for all stalls: forward stalls (stalls with near-zero sideslip and coordinated controls) are relatively simple to recover from, and I've held Grob 103s in a forward stall for extended periods of time (though they also have pretty benign stall characteristics).

Turning stalls or stalls in uncoordinated flight are where you get get in trouble with spins, and the more your airplane wants to stall at the wingtip first, the more dramatic (and interesting) will be the aircraft's departure from controlled flight. This is, in part, because of the yawing and rolling moment caused by the lift and drag differentials between wings -- and, if those differentials are between wingtips, the moment arm for those forces is that much more. Note: you are not usually using ailerons during this maneuver--in fact, if ailerons are deflected counter to the direction of the spin (per intuition), it can make the spin worse. That said, Peter Kämpf pointed out that using the ailerons to point the aircraft in the direction of the spin can make it easier to recover from.

However, more to the point: regardless of if ailerons are present or not, rolling an airplane usually produces a restoring roll moment. As I move a wing upward, per the diagram below, the wing "sees" air coming from above the wing, which decreases the angle of attack (relative wind coming from above the chord line is a negative angle of attack). The converse occurs for a wing that is descending. A negative angle of attack corresponds to a decreasing lift coefficient and vice versa: hence, the lift of the wing with change with the wing's motion and, in some way, "damp" the wing's heaving motion. 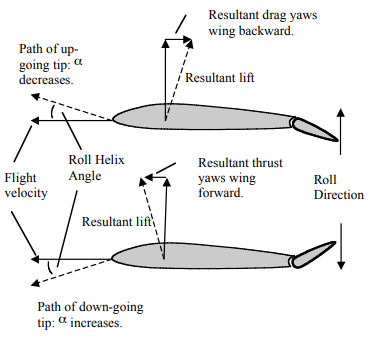 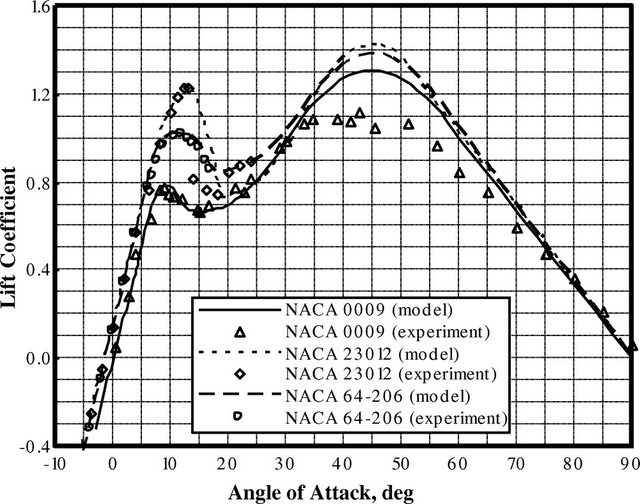 Peter does mention some issues with tip stalls in the answer I linked earlier as well, specifically in swept-wing aircraft. In swept-wing designs, lack of aerodynamic or geometric washout resulted in substantial nose-up moments at stall (when the wingtips stalled first) due to the physical geometry of the aircraft. The tip of the wing, which was no longer producing significant amounts of lift, is probably located behind the aircraft's center of gravity. As a result, loss of lift at that location would decrease the nose-down moment generated by the wings, which is exactly the opposite of what you want to be produced when in a stall. A stall at the root would obviate this. In short, how bad the results of a wingtip stall will be are tied to the design of the aircraft -- and swept wings, in most cases, are a design choice tied to lateral stability or design for high speed flight. A design choice for one characteristic influences others.

But what if we didn't use ailerons at all?

The most complete answer would speak to how tailerons or elevons (or a horizontal tail whose surfaces can be actuated independently of each other) change spin recovery technique. For example, I was reading this document on F/A-18C/D spin recovery technique, and it notes that proper spin recovery in the F/A-18 is accomplished by a lateral stick movement. The Hornet, apparently (can't say I've flown one, but I know there are folks on here who have), has a very violent stall/spin departure mode in which the stick should be kept neutral, but, once the spin is established, the stick is moved laterally to recover. Examples I've seen go into the direction of the spin, which would match with the prior note about turning into the spin with ailerons. I anticipate that this leverages the sheer size of those horizontal surfaces and that they have some degree of effectiveness (as opposed to the rudders, whose effectiveness may be reduced due to the wake from the other vertical tail).

Regardless, with reference to the question of "would a tip stall be bad if I was using tailerons anyway", the earlier points about how the severity of the stall is tied to aircraft design still stand. How bad it is depends on the design of the aircraft, how the CG is located relative to the wing, how pitching moments are produced and balanced in the aircraft's design, and so on -- all factors that are not necessarily tied to the selection of roll control surface.

Not the answer you're looking for? Browse other questions tagged aircraft-design wing stall or ask your own question.

10
Do airliners stall first at the wing tip?
3
Could vortex generators be used to preserve aileron authority during a stall?
0
Do stall strips mean that wing washout is not required?

12
Is there any application where the crescent wing would be the best wing planform?
10
Do airliners stall first at the wing tip?
1
Why would one wing stall before the other?
1
Why local(section) lift coefficient(CLL) is higher near the wing tips compared to the root on untwisted tapered wings and untwisted swept(aft) wings?
8
Can an aileron stall in-flight?
3
Could vortex generators be used to preserve aileron authority during a stall?
0
Do stall strips mean that wing washout is not required?
8
Why does a rectangular wing stall first at the root?
3
What are the scale effects of GA wing tip airfoils?
4
Why do tapered wings not stall at the root first?