What are these crevices below the wing of B-52 bomber?

What are these crevices below the wing of B-52 bomber? 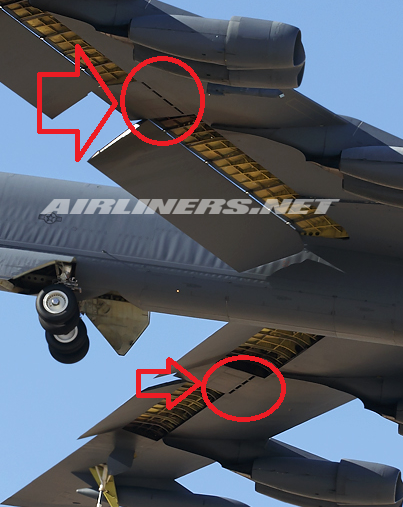 These are electronic countermeasures dispensers, more specifically chaff dispensers. You can see them in this walk-around, where an Electronic Warfare Officer shows them (timestamp 01:10:35).

That is a B-52H. The ailerons, which would have hinged at that location of the wing, were removed from later models of the B-52, including the -G and -H models.Those rectangular holes are outlets for radar-decoying chaff dispensers, and this is true for both the B-52G and -H models. Chaff consists of small shreds of metal similar to but thinner than aluminum foil. The idea being that if the bomber was targeted by a radar-guided missile, the aircraft would turn hard in one direction while ejecting chaff from the opposite wing, leaving a nice big radar target behind for the missile to hit. It's pretty effective, but less so on modern smart weapons.