Why doesn’t the A320 family suffer from the same design constraints regarding engine placement/landing gear length as the Boeing 737 family?

This answer gives a pretty good description about the design issues which lead to the problems of the Boeing 737 Max (basically the same as in a video I watched a while ago):

The landing gear of the 737 is fairly short. One benefit at the time was that this eased baggage/cargo loading by hand. The JT8D engines for which the original 737 was designed were slim enough to fit under the wings.

However, these engines performed poorly when compared to later generations. Unfortunately, later generations of engines such as the CFM56 are also larger in diameter, so Boeing had to resort to various tricks to squeeze modern jet engines underneath the wing, while still ensuring sufficient ground clearance.

Increasing the height of the landing gear, thus adding enough ground clearance in order for the bigger engines to fit underneath the wings, was not an option. As the landing gear retracts into the fuselage in flight, its length essentially is limited to the distance between its mount points on the wings, minus some clearance.

Mounting the landing gear further outward on the wing would have required a structural redesign to cope with the increased torque from the landing gear. Retracting the landing gear with the wheels in “tandem” (one behind the other rather than both next to each other), or shortening the gear upon retraction (either by a telescope mechanism or an extra hinge) would also have been major design modifications, which would have been costly and taken extra time to develop.

Therefore, Boeing opted to reduce the engine diameter as far as they could (which helped a bit but not enough), and move the engine further forward and higher up on the wing. Because the latter alters certain handling characteristics, they added an electronic system known as MCAS to compensate for that. As this change was not clearly communicated, pilots were not aware of it, which eventually lead to two crashes and the grounding of the entire fleet.

What none of these two sources addresses: the 737’s main rival, the A320 family, was designed two decades later and had the larger engines from day one, along with sufficient space underneath the wings to accommodate them.

So how does the A320 design address this? Longer landing gear with attachment points further outward on the wing (which I assume is fairly easy to do on a new design but comes at a significant cost when upgrading an existing one)? Or something else?

So how does the A320 design address this? Longer landing gear with attachment points further outward on the wing [...]?

Yes, the A320 has a longer and therefore wider landing gear. You can find general aircraft dimensions in the Airplane Characteristics for Airport Planning documents. 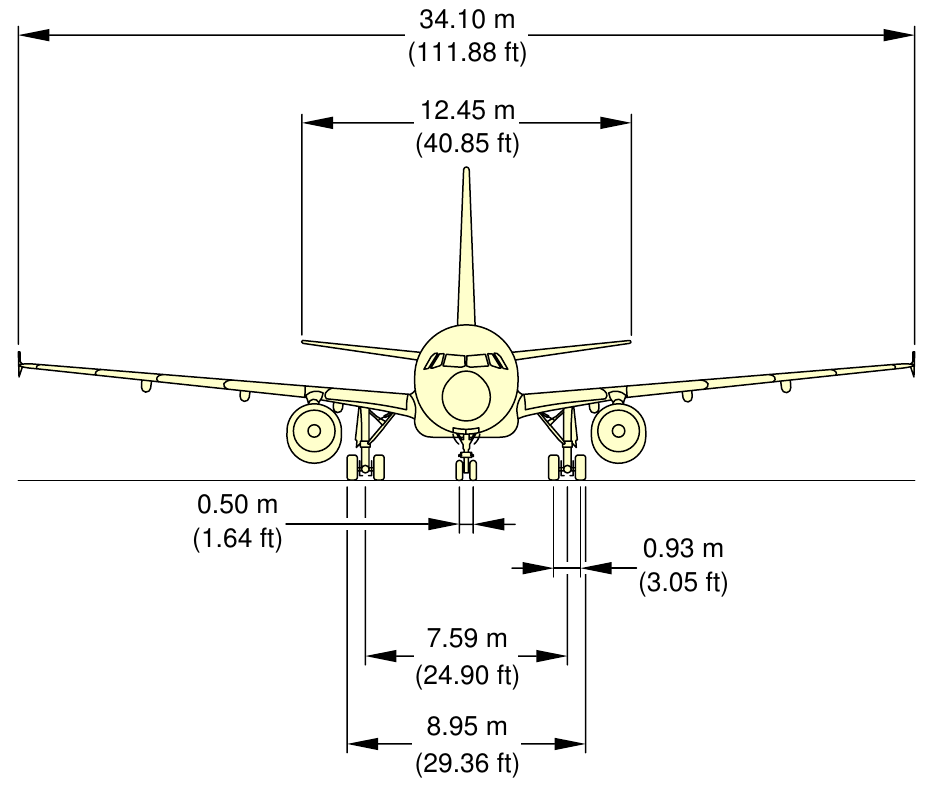 Not the answer you're looking for? Browse other questions tagged aircraft-design boeing-737 airbus-a320 or ask your own question.

12
Why wasn't the 737 MAX's landing gear lengthened enough to mount the engines under the wings, rather than in front of them?

26
Is wingtip design mature?
59
Why not mount airliner jet engines above the wings?
2
Could the Cruise-Efficient STOL configuration be as efficient as a conventional airliner?
7
Why are the wings of some planes changing width?
29
Why do most airliners have underwing engines, while business jets have rear-mounted engines?
4
What would be the impact of replacing the engines on the 737 MAX, not just reworking MCAS?
9
What could cause the Boeing "Pickle Fork" issues?
12
Why wasn't the 737 MAX's landing gear lengthened enough to mount the engines under the wings, rather than in front of them?
17
Why didn’t Boeing ramp 737NG production back up in response to the 737 MAX groundings?