If stealth aircraft are invisible to radar, then how does their own Air Force manage them or see them in flight?

Air traffic controlling is a significant deal when it comes to air forces. If a stealth aircraft like the F22 is almost invisible as said, it has cross section of very small metal ball. Then, how does US Navy/Air Force see their own aircraft in the air.

As often said, stealth are not invisible but harder to detect, even then it will create huge problems for operating airforce to effectively see thier own aircrafts in the air.

Like most military aircraft, the F-22 has a military equivalent of a transponder, an IFF system (Wikipedia):

Identification, friend or foe (IFF) is a radar-based identification system designed for command and control. It uses a transponder that listens for an interrogation signal and then sends a response that identifies the broadcaster. It enables military and civilian air traffic control interrogation systems to identify aircraft, vehicles or forces as friendly and to determine their bearing and range from the interrogator.

Depending on mission profile the F-22 may also carry a radar cross section (RCS) enhancer to hide its stealth capabilities and make it more visible on radar.

Usually the main system for creating situational awareness during military operations and training is the Link 16 military tactical datalink. This system is carried by all modern NATO military aircraft, though F-22 will be getting the full feature Link 16 system including transmit functionality during 2021 . Link 16 also utilized by other branches of the military forces.

When flying non-combat missions, many low-observability aircraft are fitted with radar reflectors.

Here is a photo of an F-22 Raptor with a Radar Reflector fitted to it. That little tin can increases the RCS one hundred-fold! 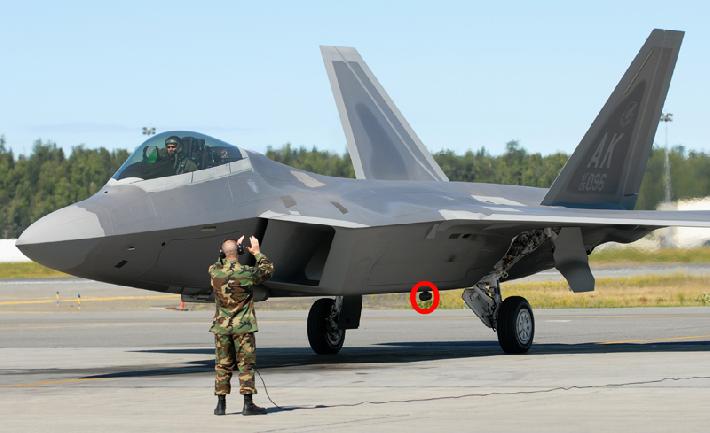 The role of the Radar Reflector is two-fold. For one thing, it makes the plane visible to other aircraft and to ground stations via radar. Secondly, it denies adversaries the opportunity to test methods of detecting the stealth aircraft.

A stealth aircraft isn't actually invisible to radar. It's just harder for current radars to see stealthy aircraft at longer distances. This gives a stealthy aircraft the element of surprise against an enemy. So at a long-range a stealthy aircraft radar signature will be a lot smaller than a regular one perhaps the size of a small bird which will get ignored.

However, a small bird flying at Mach one will probably give the game away, lol.

It's always been the case with military attack aircraft in that he who shoots first, usually wins.

Non-stealthy aircraft can employ other techniques to be stealthy or hidden such as low-level flying whereby the ground will obscure you until your close enough as aircraft will be obscured by ground clutter to a scanning radar. Also the curvature of the Earth can obscure you if you fly low enough, you can get as close as 25nm or so before being spotted. Anti-ship missiles employ this technique.

But in open air/space a stealthy aircraft will be picked up a lot later than a non-stealthy one flying toward an enemy monitoring in that direction.

This does not apply to any visual systems as a big hunk of metal in the sky is just as visible. Also, heat-seeking (infra-red) systems are less affected as heat is heat, and all you can do there is try and mask your heat signature. But these tend to be shorter-range systems.

To answer the question. Friendlies have the exact same problem as the enemy, as they don't have any special radars that can see a stealthy aircraft any better than the enemy can, that is unless you know what you're looking for/listening to.

These details are set on an aircraft pre-flight much like IFF/SSR transponder codes and for obvious reasons are very very secret.

Radars are essentially passive so this limits their range, however, if something is broadcasting the detecting range is increased.

(Simplified example) Think of it as looking for something in the dark (or very low light). Without illumination, you can't see anything until it's up close, but if that thing turns a light on or otherwise illuminates itself then you can see it.

Now if the thing is illuminated all the time everyone can see it which isn't a good idea. So imagine then the light is a certain colour and only you (and the thing) know what colour to expect. Turn the light on for a short time and you can see it as you are looking for it, but its not on long enough for anyone else to figure out there is a light on let alone workout what colour it is. Get the idea :)

Not the answer you're looking for? Browse other questions tagged aircraft-design stealth or ask your own question.

59
How do friendly stealth planes locate each other?
7
How does the F-22 Raptor radar reflector work?