Why does the elliptical wing planform have two different types of curves?

Generally, I have seen that the planform of an elliptical wing consists of two different types of elliptical curves

What is the reason for such a geometry?

(Image is attached for reference) 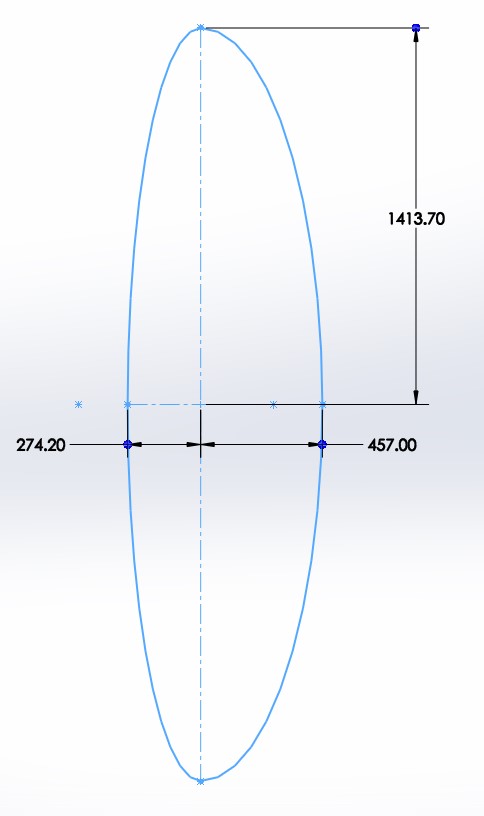 It's because the center axis for the ellipses has to be along the thickest section of the wing, because there is also a taper in thickness that must be accommodated as the ribs get smaller and smaller toward the tip. In your sketch, the thickest section is at 40% of chord and the taper in both planform and thickness must be oriented to that 40% chord line, hence the asymmetrical curves.

The placement of the axis of maximum thickness is a function of the particular airfoil selected, that is, the point of maximum thickness of the airfoil section itself. For structural efficiency, this is normally also the location for the main spar. In the sketch, which resembles a Spitfire wing planform, the broken line will be more or less the main spar location, with the nose ribs on the left and the main ribs on the right, with the ellipse curves placed to maintain the 40% forward/60% aft ratio out to the tip.

If the thickest section of the wing was at 50% of chord, then the ellipses would be symmetrical.

8
Why does the elliptical wing have the lowest drag?
8
Where is the spanwise flow? How does the span wise flow point the air towards the wingtip?
3
Why do the elliptical and the rectangular wing show different aerodynamic efficiency?
9
How do flaps deploy and stow with very large wing flex?
8
Why are the B-47’s inboard and outboard engines mounted so differently?
4
Why were most of the first-generation-Learjet wing mods never approved for the Learjet 23?
2
Elliptical wing planform and elliptical lift distribution
4
Why this inertial regulator of dragonfly wing pitch reduces self-excited coupled flapping and feathering vibrations and improves gliding flight speed
1
What is the correct definition of "spanwise" and "chordwise" with a swept wing?
3
What is the NACA Series of the Rockwell B-1b's wing design?