I was hoping to get a few answers regarding how to read a FAA departure procedure chart. Let's take the JUDTH SEVEN DEPARTURE chart shown below: 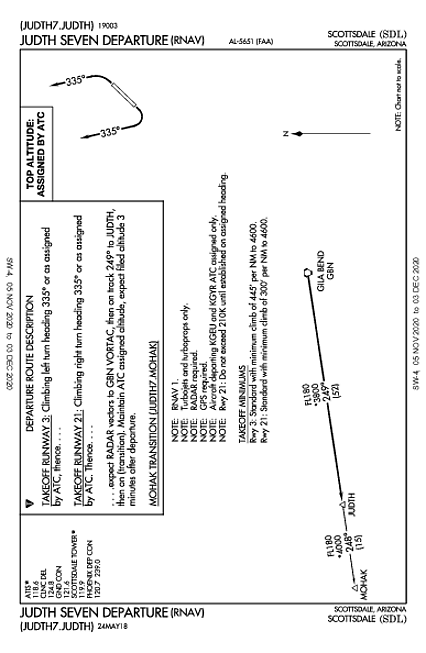 IF in doubt, get briefed by a regular, and you can always query ATC.

You have a good grasp on departures so far.

This particular SID advises the pilot departing Runway 3/21 to turn heading 335° and expect Radar Vectors to the GBN VORTAC. This is normal procedure considering the fact that so many airports in the same area share SIDs. Not all airports will have a co-located Navaid from which to start a SID. In this case, ATC would vector the aircraft back around the Phoenix airspace to GBN (Southwest) since the original 335° heading would be taking the aircraft away from GBN (due True North). Depending on traffic and ATC availability, ATC might vector you to the 249 Radial between GBN and JUDTH.

On other SIDs, there will be multiple fixes from which to leave the SID and transition to the en route portion of your flight. You, and/or ATC would file/assign for the fix most directly on your route of flight. In this case, there is only one, MOHAK.

Not the answer you're looking for? Browse other questions tagged navigation aeronautical-charts departure-sid navaids or ask your own question.

6
DP confusion. Do I turn left or right if not told?
4
On an IFR Low Altitude Chart what does this symbol mean?
10
What's a metering fix?
4
When does the mandatory minimum climb gradient during an Instrument Departure Procedure end?
7
How would an aircraft fly PIKES ONE departure procedure of Denver Airport?