How does the aircraft keeps propelling forward when airflow and thrust are not aligned?

I mean if I break down the thrust force into its components, then one component can be added in the direction of lift, and other component can be used to counteract the drag. But why would this make the aircraft to keep moving in a straight path? Because aircraft itself doesn't know how the component breakdown should be established, and also it just sees a resultant thrust force. Moreover, theoretically, I can make the component breakdown of the Thrust force using a different co-ordinate system, but still why would the aircraft keep on propelling in the same straight direction?

Let us assume level flight. Then the forces acting on the aircraft are shown in the following sketch (not necessarily to scale): 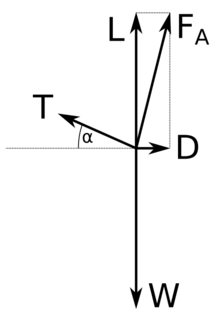 For un-accelerated level flight, the sum of all forces must be zero. This is independent of the coordinate system you use to split the forces. In our example, this is given by these equations:

The pilot controls the direction of flight with elevator and throttle. Pitch to the horizon is determined by this combination provided the aircraft is making enough vertical lift to equal its weight.

So, to get level flight, one would reduce AOA and/or throttle until the sum of the vertical lift components equals weight at zero pitch (to the horizon) angle as shown by the lift equation:

Just like any other plane, to climb, add power, to descend reduce power.

And here (finally), a vector diagram, drawn to scale. Note how much drag the angled wing lift vector is making. 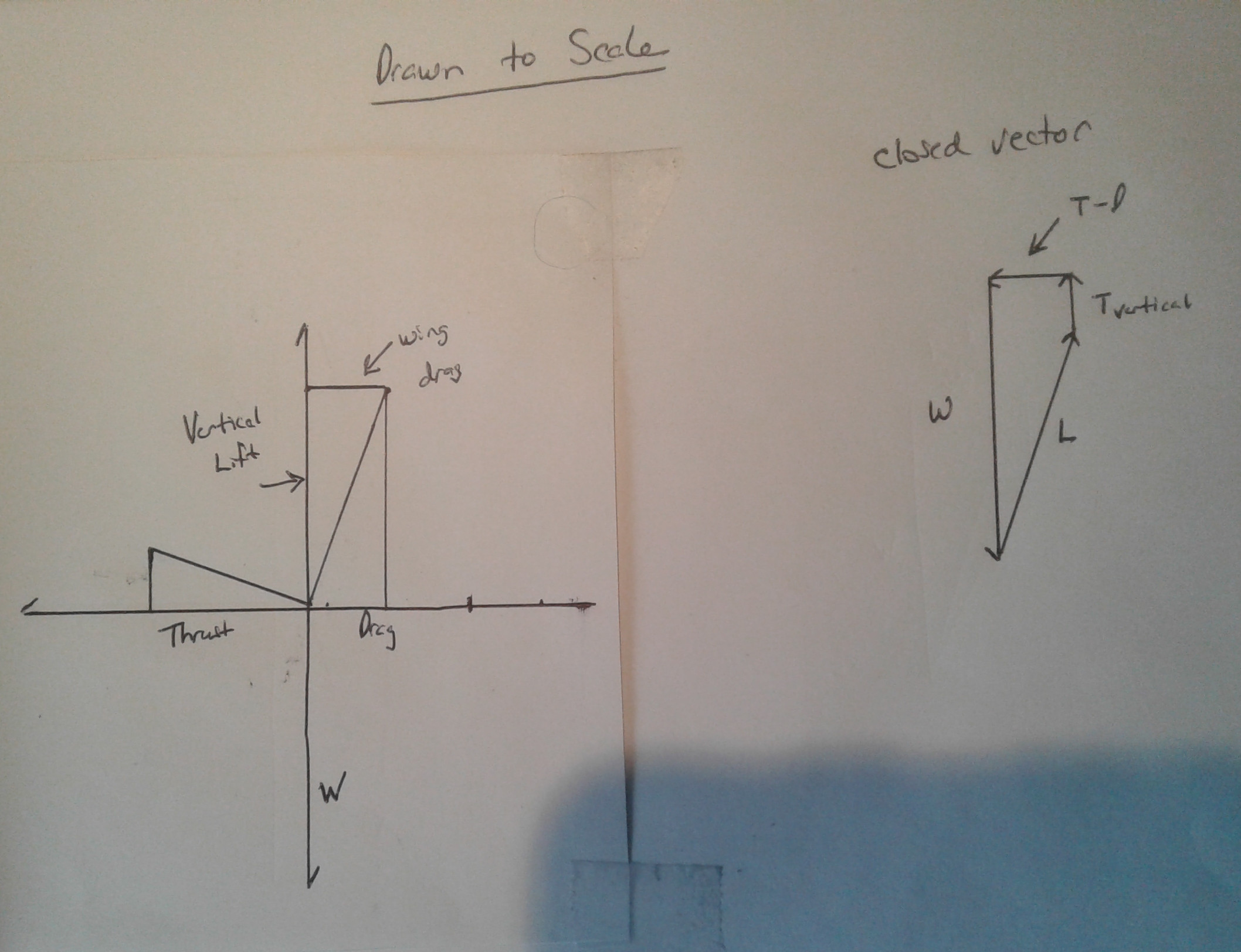 So one may muse: why not leading edge SLATS for climbing. Moving the Lift vector to vertical makes T-D = ... T!

Not the answer you're looking for? Browse other questions tagged aerodynamics aircraft-physics angle-of-attack thrust or ask your own question.

19
Does lift equal weight in a climb?

6
What is the incidence angle of a propeller in the terminology of the Wright Brothers and how did they obtain it?
4
What factors determine the direction of the resultant force vector?
5
How does the angle of attack vary in turns?
3
What is the relationship between Angle of Attack and Angle of Incidence?
2
Why does the diffuser section generate thrust in a jet engine?
6
How does the line of thrust affect longitudinal stability?
18
How does the F-35B not flip over during transition?
2
How does the engine produce aerodynamic lift at high angle of attack?
0
A question about the exact meaning of one British usage of the term “Angle of Incidence”
1
How do power and thrust curves compare?