Is “excess thrust” possible in a steady state vector diagram?

Being recently very much sold on the lift-weight-thrust closed triangle (with weight forming the hypotenuse) model for climbing flight, I proceeded to put the logic through its paces (validation) and got stuck on one fairly basic concept: excess thrust may be only transient.

Increasing throttle increases speed. We can initiate a climb with more speed, thrust working against increased drag, and to hold the climb against the tilted lift vector by increasing the lift coefficient, by way of increasing AOA.

Note the with a GA aircraft (25% max thrust to lift), increasing AOA excessively leads to loss of airspeed. In fact, this is how to stall an aircraft.

Pitch can never be transitioned into hover before stalling.

Can anyone confirm that, beyond applying throttle before the takeoff roll, "excess thrust" exists at all?

First, we must be clear on what exactly is "excess thrust". I will list two possible definitions, although many more may be possible.

Since we already answered the first option, I will now produce the free-body diagrams for the second option. 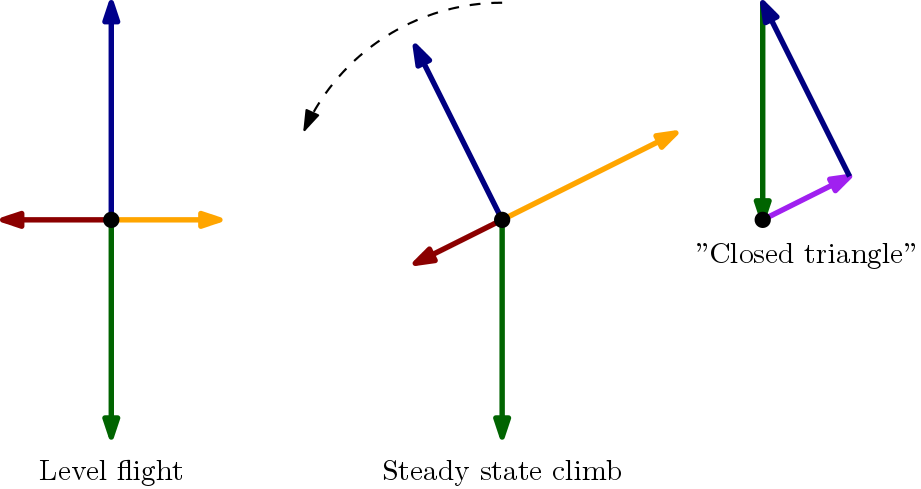 On the left, we have level flight. We recognize the four fundamental forces of flight: lift (blue), weight (green), drag (red), thrust (orange). It is immediately clear that all forces cancel each other, and we will happily coast along.

In the middle, we have a steady state climb. All vectors, except the weight vector, are 'tilted' back and change magnitude. Lift has decreased slightly, and as a consequence, drag has also decreased minutely (although this doesn't really matter). The biggest change can be seen in thrust, which has almost doubled in magnitude!

On the right image, I have proven that despite all these changes, the net force is still zero. I have replaced the lift- and drag vector in purple by subtracting drag from thrust. But wait a second! That purple vector is exactly what I called 'excess thrust': thrust minus drag! So this purple vector gives us a nice indication of how much 'extra' thrust we are using to make sure the resultant force on the airplane is still zero.

Addendum I: From the comments, "A Piper Cub cannot take part of its thrust and apply it for lift." We see in the image above that sadly, that is exactly what a Piper Cub must be doing to climb at all. The excess thrust $T_e$ requirement $T_e = W \sin \beta$ with $W$ lift and $\beta$ the climb angle. If very little excess thrust is available, we had better keep $\beta$ small - exactly what you would expect for a little cub!

Addendum II: below, the same image but with excess thrust according to definition 1. The vectors are no longer a 'closed triangle', and the net force is not zero. The aircraft is now accelerating.

In a steady-state climb, Thrust is not a leg of the closed triangle of force vectors; rather, (Thrust-Drag) is.

See the right-hand vector diagram in this related answer-- Is excess lift or excess power needed for a climb?. The diagram shows that if our definition of "excess thrust" is (Thrust minus Drag), then excess Thrust clearly does exist in a steady-state climb.

The present question seems to imply that if we are flying horizontally, and then we increase Thrust, we must increase angle-of-attack if we wish to climb rather than accelerate horizontally. This isn't actually the case, at least over the long run. If we hold angle-of-attack constant and increase Thrust, we'll have a brief initial acceleration, but we'll end up in a steady-state climb at a slightly lower airspeed than we started with, at least in the case where little or no downthrust is present in relation to the actual direction of the flight path at any instant.

Note the relationship between Thrust and airspeed on either of the two right-hand tables in this related answer-- Is excess lift or excess power needed for a climb?.

The right-hand tables assume that no upthrust or downthrust is present, relative to the direction of the flight path. Each table assumes a constant angle-of-attack from one row to the next.

(But the airspeed values are not intended to be scaled in the same units between the two tables, since the lift coefficient is not specified, and is presumably much less in the upper table than in the lower table.)

You may find the vector diagrams, calculations, and explanations in this other related answer to be helpful as well -- Does lift equal weight in a climb?

When less than full thrust is in use during any steady state phase of flight, it can be considered that excess thrust is available.

Application of some or all of this excess thrust will result in a disturbance to the steady state - either acceleration in level flight, transition to a climb, increased climb rate, reduced descent rate or a combination, depending on what the pilot wants the airplane to do, eg at 10,000ft AMSL or FL100 accelerate from 250 kts and climb, once at climb speed, say 290 kts maintain the spd and continue climb at the resulting climb rate based on a fixed "climb thrust" setting throughout this sequence..

Just to clarify, there can be a steady state even during climb and descent if at constant spd and constant rate of climb and constant thrust, though in truth, this equation is also affected by the changes in properties described by the standard atmosphere.

Another way to look at this is that the calorific value of the fuel burnt by increasing thrust, puts energy into this system which is used for an increase in either kinetic energy (speed), or potential energy (altitude) or is shared by both.

At or close to the aircraft ceiling limitation, other factors come into play as also much excess thrust may just not be available, so that's another story.

Not the answer you're looking for? Browse other questions tagged aircraft-performance aircraft-physics flight-dynamics or ask your own question.

22
Does lift equal weight in a climb?
32
Is excess lift or excess power needed for a climb?

0
Why does an elevator deflection (step) result in a nonzero short-term-steady-state response in pitch rate?
1
How Helicopters Change Attitude (Gyroscopic Precession or Thrust Vector Tilt)
2
Why does a steady-state non-zero body yaw and/ or roll rate induce side force?
2
On an energy-maneuverability (E-M) diagram how does the shape of a specific excess power (Ps) curve change as thrust is increased or decreased?
2
What is the mathematical relationship between Specific Excess Power and an aircraft's acceleration at a given point on an E-M diagram?
0
Why does a Thrust Vector Control System increase maneuverability?