What instrument can be used to check that constant attitude is maintained?

One way to determine that you are maintaining a constant attitude is to occasionally check:
A. The vertical speed indicator
B. The tachometer
C. The altimeter

My answer is A, but sporty’s app says I’m wrong and correct answer is C.

Could someone please confirm the right answer and explain why?

The VSI is intentionally designed to present the climb or descent rate averaged over about seven seconds, while the altimeter is designed to have as little lag as possible. Except for in gliders where the altimeter may stick due to the lack of vibration, the altimeter will actually indicate a climb or descent sooner than the vertical speed indicator. However, what you really want to know as a guide to whether you are holding the proper pitch attitude for the power setting, is the vertical speed over the long term, i.e. over a time-scale of a minute or more. Since the change in altitude represents the vertical speed integrated over time, the altimeter is superior to the VSI for this purpose, just as it is superior for indicating the very start of a climb or descent. Plus, in a situation where you are trying to hold a specific cruising altitude, the altimeter has the added benefit of letting you know when you've successfully remediated an unwanted change in altitude, regardless of whether it was caused by an updraft or downdraft, or by a slight error in the pilot's choice of pitch attitude in relation to the power setting.

Clearly, the original question was only intended to apply to the case where the pilot's goal is to fly horizontally, and he or she is attempting to make the control inputs that are needed to accomplish this, rather than to climb or descend at a constant rate, or execute some other maneuver. Otherwise, the suggested answer is clearly wrong. That's the joy of this sort of multiple-choice question-- often it seems that it was deemed too expensive to expend the amount of ink (or bits) that would be needed to really constrain the problem enough to make the suggested answer actually be the most correct one. Don't sweat it, just "go with the flow" and try to figure out what the take-away lesson is supposed to be.

Here's a bit of "forbidden knowledge"-- trying to maintain an exactly constant altitude over the short term by instantly correcting for every updraft and downdraft is actually less efficient than keeping the airspeed and pitch attitude closer to constant. This is addressed in the last paragraph of this related ASE answer. However, traffic and airspace considerations sometimes make the latter style of flying impractical.

I think that is the case here. While the VSI may well indicate to you that you are climbing or descending, it is unreliable for monitoring as it will be affected by small fluctuations such as up/downdrafts and lags quite a bit behind actual control input.

The altimeter, on the other hand, is quite stable and does not fluctuate quite so readily. If you're scanning and over a period of a minute your altitude has increased by 100 ft you can be pretty sure you're climbing - in that time the VSI may have indicated a climb, a descent and another climb etc. If you had scanned it while in a short-lived descent you might be fooled into thinking the long term affect was a descent. It was not - you were climbing overall.

It looks like the Sporty's material is in line with the FAA's Instrument Flying Handbook. Chapter 7 describes basic maneuvers using analog instruments and it describes the attitude indicator as giving a "direct indication of pitch attitude", while the altimeter gives an indirect one (p. 7-3):

This question sounds like it is a throwback from when the Primary & Secondary method of Basic Attitude Instrument Flight was the preferred method of teaching and testing student pilots instead of the Control & Performance method. This assigned a role of Primary or Supporting to each instrument for each basic maneuver. Student pilots were required to memorize these roles for each instrument and each maneuver.

The Vertical Speed Indicator plays a minor role in Basic Attitude Instrument Flying. The VSI has a lag factor that makes it unsuitable for giving immediate feedback like a Variometer. In the Primary & Secondary method, the VSI is only in the primary role for constant rate climbs and descents. In the Control & Performance method, the VSI is solely a supporting and cross check instrument, only. It is never a primary instrument unless their is an issue with the Attitude Indicator.

Here is a chart for the Primary & Secondary method. 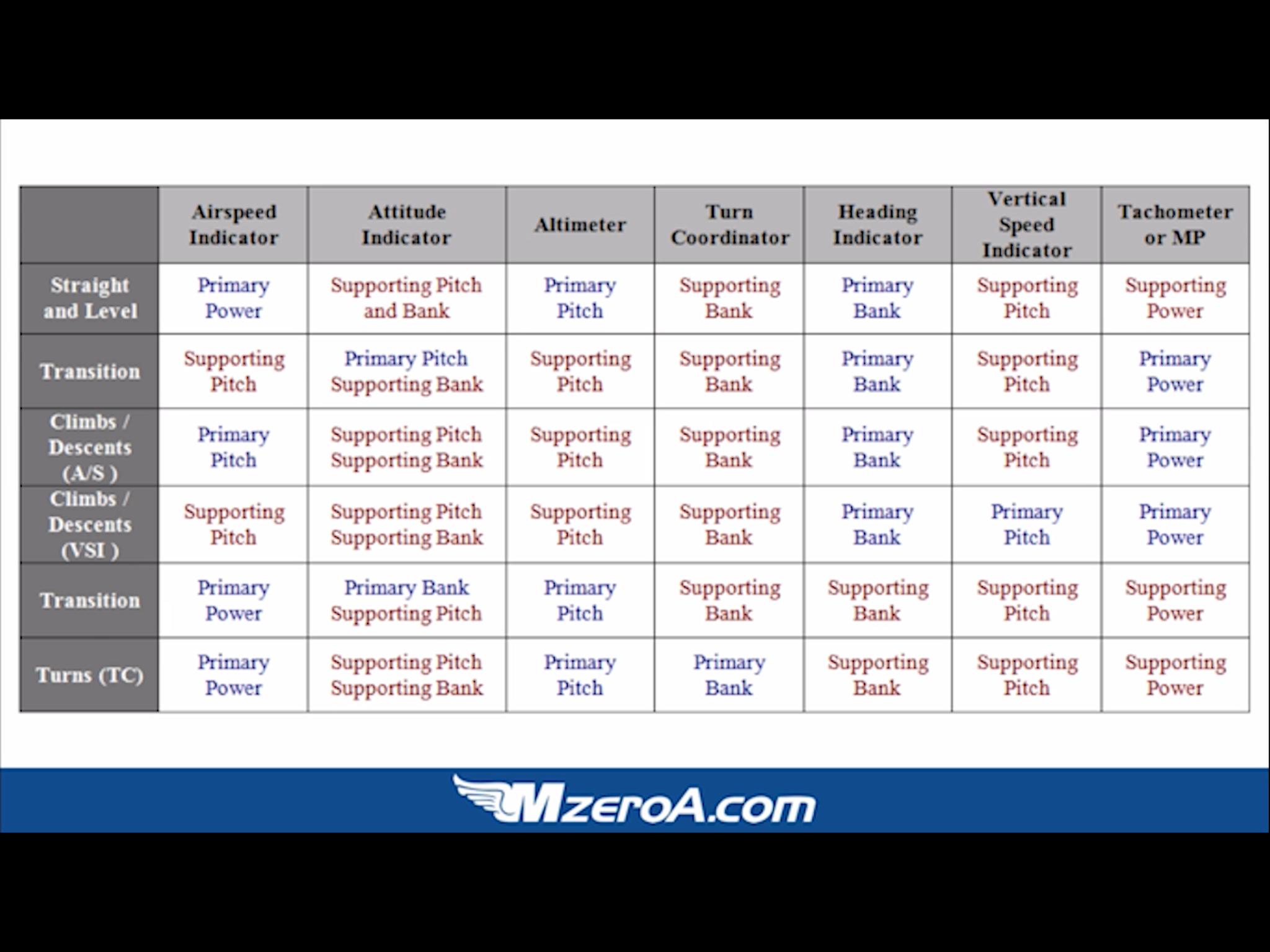 Control and Performance:
(Attitude + Power = Performance)
The Primary instruments for all maneuvers are the Attitude Indicator and the Tachometer/Manifold Pressure Gauge

I think it's not a good question because it's not specific enough. According to the answer you a need to check altimeter occasionally to determine your attitude. But that's not the case in other than level flight. You can look at altimeter all you want during climb or descent and it will not give you a slightest clue about how shallow or how deep your nose is. It should be a little more specific.

If the question was about level flight it might be closer to truth. However, I would still discuss that VSI is a better instrument to maintain level flight than altimeter. I see VSI as a moving average trend indicator, if you are into stats a little bit. It will show you the change and the direction of the change in altitude way before the altimeter at level flight. You can see VSI as an error indicator. The second you see it moving in one direction try to minimize the error. Try that and you will see instant improvement in your level flights.

The question is bunk. You check you attitude with the attitude indicator (and turn coordinator).

One can maintain a perfectly constant pitch attitude while entering a climb or descent. Alternately, a pilot might need to vary pitch attitude in order to maintain a constant altitude. Your attitude indicator (and turn coordinator) give you attitude information. Those instruments don’t tell you how well you are flying, i.e. maintaining altitude, heading, and airspeed.

Let’s say, for example, you are in the clouds with a perfectly level attitude indicator and you notice your altitude is decreasing. We’ll say it’s caused by a small, steady downdraft. In order to correct the altitude loss, you will need to add pitch and power. Once corrected, a new pitch/power setting will be used to offset the slight downdraft (for however long it lasts).

In level flight, you will always be scanning your altimeter and adjusting with pitch attitude and power - not the other way around! In a climb or descent, it’s the same, however you will add the vertical speed indicator to your scan to verify your rate of climb/descent you desire.

In other words, the purpose of your scan is not to make sure that the airplane’s attitude isn’t changing - and I think that is what the poorly worded question implies. Rather, your scan is there to verify that you are performing your flight correctly (maintaining altitude, heading, airspeed).

Not the answer you're looking for? Browse other questions tagged flight-training flight-instruments or ask your own question.

10
How does one reset an attitude indicator that doesn't have a cage?
18
What types of attitude indicators are there?
3
What portion of an Instrument Proficiency Check must be in the airplane?
1
How does an engine driven vacuum pump used in gyroscopic instrument work?
20
What was the first flight instrument ever used in an airplane?
4
What instruments are used to indicate aircraft attitude in acrobatic airplanes?
9
What is that missing instrument on a Beechcraft 1900C?
1
What is the most cost effective way of combining an instrument and multi engine check ride?
0
What is the name of the Instrument that indicates roll?
2
Do the rules used in modern soaring competitions forbid gyroscopic flight instruments, or forbid the use of AHRS-driven attitude displays, etc?