Considering aeroelastic flutter, when an eigenfrequency of the wing meets with an aerodynamic frequency, the commonly mentioned solutions make sense: avoid the convergence zone by limiting speed, or by increasing the wing's eigenfrequency trough stiffness, reduced weight, or reduced span.

Makes sense, especially if I use the spring and mass model for the wing: 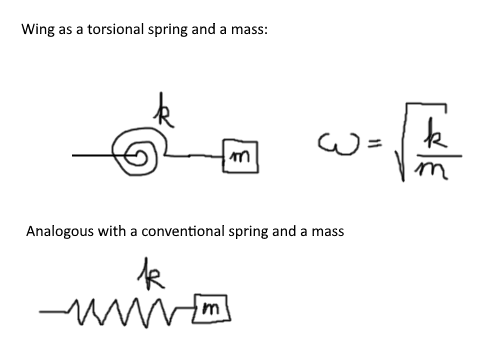 I'll use the analogy with the conventional spring as it makes things easier to understand for me.

So Wikipedia says: "Prediction involves making a mathematical model of the aircraft as a series of masses connected by springs and dampers which are tuned to represent the dynamic characteristics of the aircraft structure. [...] Small carefully chosen changes to mass distribution and local structural stiffness can be very effective in solving aeroelastic problems."

1: Do I understand correctly that with this approach, the wing will act similarly to the following model, where the motion is rather chaotic?

2: This should have no certain frequency. Does this mean flutter is avoided?

3: Does this mean flutter can be avoided by redistributing mass around the wing, without increasing stiffness or reducing mass?

Do I understand correctly that with this approach, the wing will act similarly to the following model, where the motion is rather chaotic?

No, your combination of masses and springs will have several eigenfrequencies. For aeroelastic analysis only the lowest eigenfrequency counts because this will couple with aerodynamic frequencies at the lowest flight speed. Once you fly faster, the next eigenfrequnecy in line will resonate, but that is only hypothetical because flutter caused by the lowest frequency has already destroyed the airframe.

This should have no certain frequency. Does this mean flutter is avoided?

No, since it has several eigenfrequencies, flutter is as certain as before.

Does this mean flutter can be avoided by redistributing mass around the wing, without increasing stiffness or reducing mass?

Flutter cannot be avoided, only its speed shifted up by damping. The rule always is to place the center of gravity ahead of the axis of rotation (that would be the elastic axis in case of wing torsion), so any movement causes an inertial damping force. This is the reason for the forward location of wing mounted engines.

Not the answer you're looking for? Browse other questions tagged flutter aeroelasticity or ask your own question.

14
How was flutter mitigated in jets such as the F-15 and F-16?
9
How can engine positioning affect flutter tendency?
4
Does flutter disappear above the flutter speed?

19
What causes aileron and elevator flutter?
7
Is flutter speed always smaller than divergence speed for aircraft?
6
Why can not two modes coincide perfectly for some cases in Flutter phenomena?
9
How can engine positioning affect flutter tendency?
0
How do we choose a frequency range of interest for flutter prediction?
2
How do airliners with engines mounted on places other than wings suppress wing flutter?
4
What is the difference between flutter and vortex induced vibration?
4
Does flutter disappear above the flutter speed?
1
Do/why don't spaceplanes suffer from flutter?